A Decade of Antifungal Leads from Natural Products: 2010–2019
Previous Article in Special Issue

Metabolism and Pharmacokinetic Study of the Boron-Containing Prodrug of Belinostat (ZL277), a Pan HDAC Inhibitor with Enhanced Bioavailability

Diclofenac belongs to the drug class non-steroidal anti-inflammatory drugs widely used in Europe as well as all over the world. Thus, it is important to conduct research on its quality control of available pharmaceutical preparations like for example enteric coated tablets. Among various analytical techniques, thin-layer chromatography (TLC) is ideal for this task due to their short time analysis, ease of operation and low cost. Hence, the aim of this study was to develop the optimal conditions of analysis and quantitative determination of diclofenac sodium in enteric tablets by using TLC in combination with densitometry. Of all chromatographic systems tested, the best is the one which consists of silica gel 60F254 and cyclohexane: chloroform:methanol:glacial acetic acid (6:3:0.5:0.5 v/v) as the mobile phase, which allows the successful separation of examined diclofenac sodium as active component and the largest number (twelve) of its degradation products as potential impurities of its pharmaceutical products. This indicates that the newly developed method is more effective than previously reported assays by Starek and Krzek. Linearity range was found to be 4.00–18.00 μg/spot for diclofenac sodium. The results of the assay of enteric tablet formulations equals 98.8% of diclofenac sodium in relation to label claim is in a good agreement with pharmaceutical requirements. View Full-Text
Keywords: pharmaceuticals; diclofenac; non-steroidal anti-inflammatory drugs; TLC; densitometry pharmaceuticals; diclofenac; non-steroidal anti-inflammatory drugs; TLC; densitometry
►▼ Show Figures 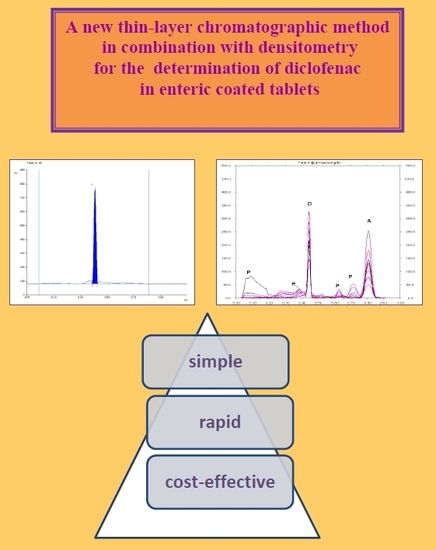 Parys, W.; Pyka-Pająk, A.; Dołowy, M. Application of Thin-Layer Chromatography in Combination with Densitometry for the Determination of Diclofenac in Enteric Coated Tablets. Pharmaceuticals 2019, 12, 183.


Parys W, Pyka-Pająk A, Dołowy M. Application of Thin-Layer Chromatography in Combination with Densitometry for the Determination of Diclofenac in Enteric Coated Tablets. Pharmaceuticals. 2019; 12(4):183.


Parys, Wioletta; Pyka-Pająk, Alina; Dołowy, Małgorzata. 2019. "Application of Thin-Layer Chromatography in Combination with Densitometry for the Determination of Diclofenac in Enteric Coated Tablets." Pharmaceuticals 12, no. 4: 183.