DataSpoon: Validation of an Instrumented Spoon for Assessment of Self-Feeding
Next Article in Special Issue

Requests for detection of environmental changes through physical, chemical, or biological parameters have grown rapidly over the last decades. There is great interest, not only in the scientific community, but also in the industry, in developing new sensing devices based on optical fibers, in an effort to exploit their intrinsic characteristics and find new application fields. In order to compete with conventional sensors, these sensors need to be trustworthy, robust, highly sensitive, and affordable.
Various techniques are being developed in response to the increased need for non-destructive techniques that can monitor environments that are difficult to access; some of the most promising ones are based on optical fiber sensors (OFSs). The ability to have small devices physically near the objects or media being sensed brings about new opportunities; for example, in structural monitoring and industrial or pharmaceutical applications [1]. Considering their distinct working principles, there are several types of OFSs, which normally are separated into two classes: (i) extrinsic, where the optical fiber is only a medium to convey light to and from a separate element or space, and (ii) intrinsic, where the optical fiber constitutes the sensing element [2].
The advantages of using OFSs are well known—small dimensions, capability of multiplexing, chemical inertness, and immunity to electromagnetic fields. Furthermore, these sensors usually present good linearity, rapid response for real-time monitoring, and high sensitivity. Thus, OFSs present several features that make them highly sensitive to external perturbations and allow them to be embedded in materials [3], which is attractive in a wide variety of applications, namely in the medical, aerospace, and wind energy industries. They have also been applied in the oil and gas industry, taking advantage of distributed sensing capability, and in several fields, such as electrical engineering, materials science, biology, chemistry, physics, and optics [4]. There is no doubt that depending on the application and parameter or configuration for which the sensors are developed, the possibilities are huge [5,6]. Currently, the fiber sensing field is immense, and there is a wide variety of methods to classify the sensors, according to:

In 1978, Kenneth O. Hill reported the first work on FBGs and their applications, both in optical communications and optical sensor systems [35]. Since then, this type of sensors has been widely applied in the measurement of different parameters, such as physical, chemical, clinical, biomedical and electrical parameters in the energy, aerospace and civil fields. They are simple, intrinsic sensing elements, which can be photo-inscribed into silica fiber and offer all the advantages associated with fiber optic sensors. Typically, a FBG sensor can be seen as a selective photo-induced modulation of the optical fiber core refractive index. The FBG resonant wavelength (Bragg wavelength), λB, is related to the effective refractive index of the core mode (neff) and the grating period (Λ), according to Equation (1) [36]:
When the grating is illuminated by a broadband optical source, the reflected spectrum presents a sharp peak, which is caused by interference of light with the planes of the grating. Any perturbation on the grating (e.g., external strain or temperature variation) results in a shift in the Bragg wavelength, which can be detected either in the reflected or transmitted spectra [6]. See Figure 1.

Interferometric optical fiber sensors are based on the principle of optical interference for the measurement of chemical or physical properties. These sensors can be an excellent solution for sensing because they can exhibit high sensitivity compared to FBGs, a wide dynamic range, multiplexing capacity, and low losses [37].
One of the first works published on a fiber optic sensor based on FP interferometry was in 1982 by Yoshino [38]. Since then, rapid evolution has occurred in the field. FP interferometers are normally constituted of two parallel reflecting surfaces, with reflectance R1 and R2, separated by a determined distance, L, as exemplified in Figure 2 [39]. The FP interferometer can be developed by intentionally building up reflectors externally to the fibers (Figure 2a), or internally (Figure 2b), being classified into two categories: extrinsic and intrinsic sensors [40,41].
In the case of extrinsic sensors, air cavity can be formed through a supporting structure, such as the one shown in Figure 2a. These sensors are advantageous for obtaining high finesse interference signals [42], bearing in mind that high reflecting mirrors may be used, although the manufacturing process is simple and no expensive equipment is needed. However, they have reduced coupling efficiency, and careful and precise alignment is required [43].
The intrinsic FP interferometer fiber sensor has reflecting components within the fiber itself. There are several ways to form this type of sensor, such as micro machining [44,45,46,47], by using two FBGs in series [48,49], through chemical etching [50,51,52], by thin film deposition [53,54,55], using special fibers [56,57], or even creating an air bubble in fibers [58,59]. In the simplest form, when the cavity has low-reflectivity mirrors, it can be approximated to a two-wave interferometer. In such cases, the reflection spectrum is essentially determined by the phase difference, δFP, between the waves generated in the two reflections [59], which is described by: where, n, LFP, and λ are the effective refractive index of the cavity material, the physical length of the cavity, and the wavelength of incident light, respectively. When there is an external perturbation, such as variation of strain, temperature, or other parameters detectable by the sensors, both the cavity length and effective refractive index are able to change, translating into a shift of phase difference. This shift can be easily monitored by using a suitable interrogation system [39,59]. Table 1 presents the main characteristics of the different intrinsic FP sensors used for temperature measurements reported over the last five years in the literature.

A scheme of a typical multimode fiber interferometer (MMI) sensor is presented in Figure 3, where a section of the multimode fiber (MMF) is sandwiched between two single-mode fibers (SMFs) [78]. This is the so-called single-mode-multimode-single mode (SMS) fiber structure; however, MMIs can also be obtained using a single-mode-multimode fiber configuration [79]. It has a series of advantages that allows it to be used as a sensor—simple structure, low cost, small size, and high stability. Some of the parameters that have been monitored with this kind of sensor are strain and temperature [80], displacement [81], refractive index [82], and microbend [83].
The subjacent operating principle of this kind of sensor is the MMI excitation between modes in the MMF section, which can be influenced by external perturbations [84,85], i.e., the fundamental mode that propagates along the SMF will couple into the MMF, exciting many modes, each of which has a different propagation constant [6]. After passing through the multimode section, they reconnect to the SMF. Since each mode has already experienced a different phase shift, the modes interfere.
The main configurations of the MMI structures are simple and enable the detection of a change in the refractive index of the surrounding medium, i.e., due to the high interaction of the evanescent field with the external environment. The manufacturing of new concepts of MMIs can be greatly enhanced through the combination of fiber optics with nano-structure technology and the use of sensitive thin films [86,87,88,89]. Sensors based on MMI, allied with the functionalization with thin films as sensitive elements, could open new fields for optical fiber sensor applications. Functional materials can be deposited on the side- or end-face of fibers with different techniques, such as spin-coating, dip-coating, thermal evaporation, or sputtering [90]. The use of polymeric sensitive materials in optical fiber sensors has the advantage of enhanced response time with better sensitivity and selectivity [6,91]. Table 2 reports the main configurations for temperature parameter using MMI sensors reported over the last five years.

This paper reviewed achievements in the area of temperature optical fiber sensors, where different configurations of the sensors reported from 2015 to 2020 were presented and their possible potential for biomedical applications studied.
In view of this review article, we can mention that the use of FBG sensors and spatially distributed sensing techniques is assuming high relevance for non-intrusive monitoring of temperature and other clinically relevant parameters, since they retain the mechanical stability of the optical fiber and also avoid referencing issues.
Temperature is a vital sign and a crucial and habitually monitored parameter in medicine; it is measured using a variety of technologies in all clinical settings, including surgeries, oncology treatment, and intensive care units.
Thermocouple and thermistor devices are widely used for temperature measurements in clinical practice. However, due to the presence of metallic conductors, they are inappropriate for clinical procedures involving, for instance, incident radio frequency or microwave fields. Thus, it is important that new optical fiber technologies are developed, preferably portable temperature sensing platforms that offer low costs, small sizes, and easy-to-use configuration; and can use artificial intelligence for faster data analysis.
The main advantages of optical fiber sensors for medical solutions are their small dimensions, chemical inertness, immunity to electromagnetic fields, rapid response for real-time monitoring, and ability to be embedded into materials.

P.R., S.S., O.F., and S.N., proposed the ideas, wrote, reviewed, and edited the manuscript. All authors have read and agreed to the published version of the manuscript.

This work was financed by the ERDF—European Regional Development Fund—through the Operational Programme for Competitiveness and Internationalization—COMPETE 2020 Programme and by National Funds through the Portuguese funding agency, FCT—Fundação para a Ciência e a Tecnologia within project ENDOR—Endoscope based on New Optical Fiber Technology for Raman Spectroscopy (POCI-01-0145-FEDER-029724). 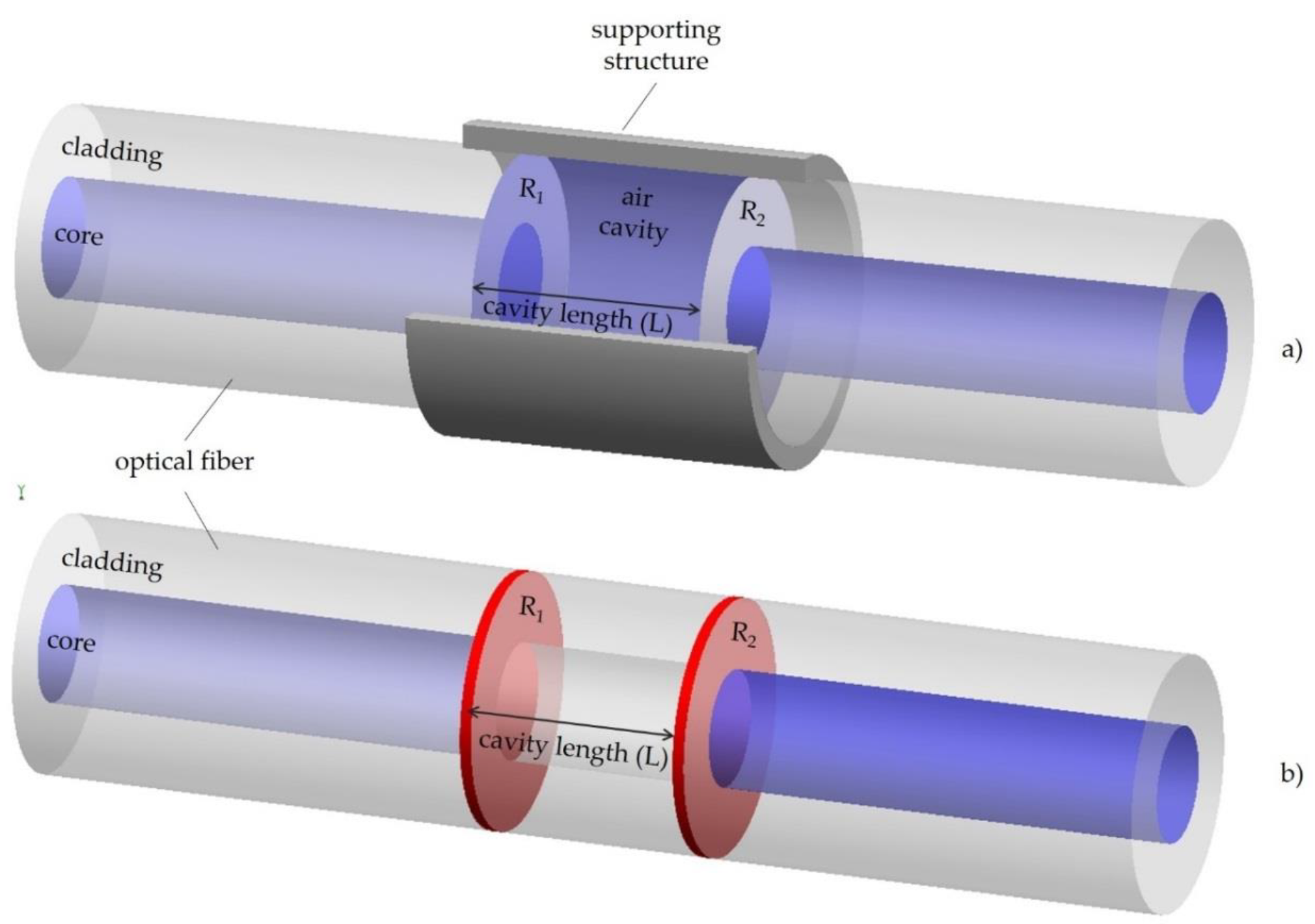