Nano-networks are composed of interconnected nano-nodes and can enable unprecedented applications in various fields. Due to the peculiarities of nano-networks, such as high density, extremely limited energy and computational resources, traditional carrier-sensing based Media Access Control (MAC) protocols are not suitable for nano-networks. In this paper, a Slot Self-Allocation based MAC protocol (SSA-MAC) is proposed for energy harvesting nano-networks. Two transmission schemes for centralized and distributed nano-networks are designed, respectively. In centralized nano-networks, nano-nodes can only send packets to the nano-controller in their Self-Allocation Slots (SASs), while, in distributed nano-networks, nano-nodes can only receive packets from surrounding nano-nodes in their SASs. Extensive simulations were conducted to compare the proposed SSA-MAC with PHysical LAyer aware MAC (PHLAME), Receiver-Initiated Harvesting-aware MAC (RIH-MAC) and Energy Efficient Wireless NanoSensor Network MAC (EEWNSN). From the results, it can be concluded that the proposed SSA-MAC achieves better performance and can reduce the collision probability, while improving the energy efficiency of nano-networks. View Full-Text
Keywords: nano-networks; energy harvesting; self-allocation; MAC protocol; terahertz communications nano-networks; energy harvesting; self-allocation; MAC protocol; terahertz communications
►▼ Show Figures 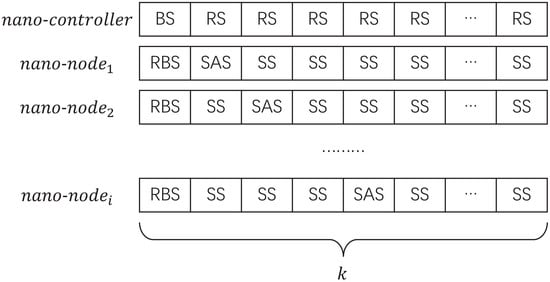