Dominick A. DellaSala
1,* and

High-severity fire creates patches of complex early seral forest (CESF) in mixed-severity fire complexes of the western USA. Some managers and researchers have expressed concerns that large high-severity patches are increasing and could adversely impact old forest extent or lead to type conversions. We used GIS databases for vegetation and fire severity to investigate trends in large (>400 ha) CESF patches in frequent-fire forests of the western USA, analyzing four equal time periods from 1984 to 2015. We detected a significant increase in the total area of large patches relative to the first time period only (1984–1991), but no significant upward trend since the early 1990s. There was no significant trend in the size of large CESF patches between 1984 and 2015. Fire rotation intervals for large CESF patches ranged from ~12 centuries to over 4000 years, depending on the region. Large CESF patches were highly heterogeneous, internally creating ample opportunities for fire-mediated biodiversity. Interior patch areas far removed from the nearest low/moderate-severity edges comprised a minor portion of high-severity patches but may be ecologically important in creating pockets of open forest. There was ample historical evidence of large CESF patches but no evidence of increases that might indicate a current risk of ecosystem-type shifts. View Full-Text
Keywords: complex early seral forest; conifers; biodiversity; high-severity fire; western USA complex early seral forest; conifers; biodiversity; high-severity fire; western USA
►▼ Show Figures 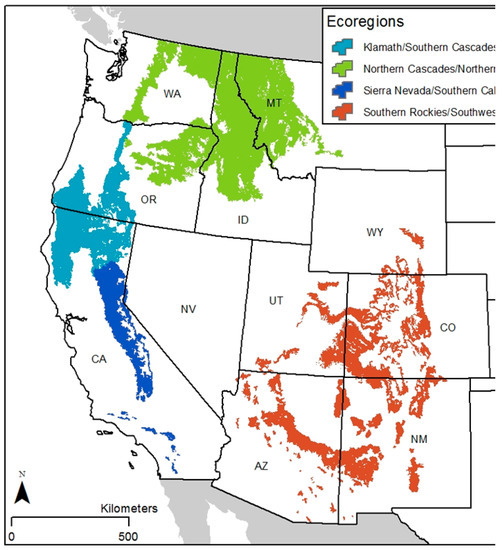