VLA-4 Expression and Activation in B Cell Malignancies: Functional and Clinical Aspects
Previous Article in Journal

Representing the major cause of morbidity and mortality for chronic lymphocytic leukemia (CLL) patients, immunosuppression is a common feature of the disease. Effectors of the innate and the adaptive immune response show marked dysfunction and skewing towards the generation of a tolerant environment that favors disease expansion. Major deregulations are found in the T lymphocyte compartment, with inhibition of CD8+ cytotoxic and CD4+ activated effector T cells, replaced by exhausted and more tolerogenic subsets. Likewise, differentiation of monocytes towards a suppressive M2-like phenotype is induced at the expense of pro-inflammatory sub-populations. Thanks to their B-regulatory phenotype, leukemic cells play a central role in driving immunosuppression, progressively inhibiting immune responses. A number of signaling cascades triggered by soluble mediators and cell–cell contacts contribute to immunomodulation in CLL, fostered also by local environmental conditions, such as hypoxia and derived metabolic acidosis. Specifically, molecular pathways modulating T-cell activity in CLL, spanning from the best known cytotoxic T lymphocyte antigen-4 (CTLA-4) and programmed cell death 1 (PD-1) to the emerging T cell immunoreceptor with immunoglobulin and immunoreceptor tyrosine-based inhibition motif domains (TIGIT)/CD155 axes, are attracting increasing research interest and therapeutic relevance also in the CLL field. On the other hand, in the microenvironment, the B cell receptor (BCR), which is undoubtedly the master regulator of leukemic cell behavior, plays an important role in orchestrating immune responses, as well. Lastly, local conditions of hypoxia, typical of the lymphoid niche, have major effects both on CLL cells and on non-leukemic immune cells, partly mediated through adenosine signaling, for which novel specific inhibitors are currently under development. In summary, this review will provide an overview of the molecular and microenvironmental mechanisms that modify innate and adaptive immune responses of CLL patients, focusing attention on those that may have therapeutic implications. View Full-Text
Keywords: immunosuppression; tolerance; immune checkpoints; microenvironment; hypoxia immunosuppression; tolerance; immune checkpoints; microenvironment; hypoxia
►▼ Show Figures 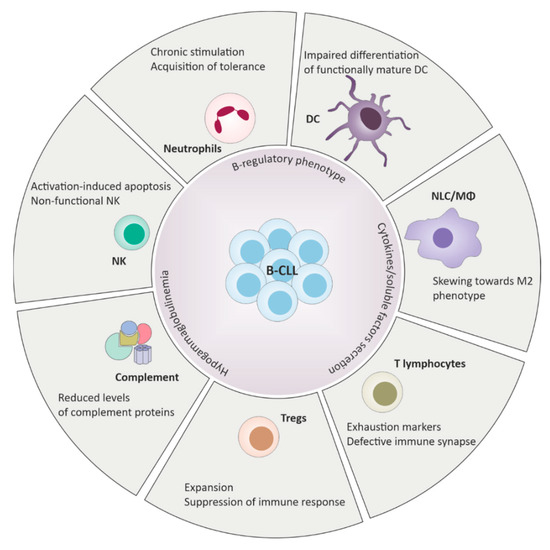