The A peptide is a major beta-amyloid species in the human brain, forming toxic aggregates related to Alzheimer’s Disease. It also strongly chelates Cu(II) at the N-terminal Phe-Arg-His ATCUN motif, as demonstrated in A and A model peptides. The resulting complex resists ROS generation and exchange processes and may help protect synapses from copper-related oxidative damage. Structural characterization of Cu(II)A complexes by NMR would help elucidate their biological function, but is precluded by Cu(II) paramagneticism. Instead we used an isostructural diamagnetic Pd(II)-A complex as a model. To avoid a kinetic trapping of Pd(II) in an inappropriate transient structure, we designed an appropriate pH-dependent synthetic procedure for ATCUN Pd(II)A, controlled by CD, fluorescence and ESI-MS. Its assignments and structure at pH 6.5 were obtained by TOCSY, NOESY, ROESY, H-C HSQC and H-N HSQC NMR experiments, for natural abundance C and N isotopes, aided by corresponding experiments for Pd(II)-Phe-Arg-His. The square-planar Pd(II)-ATCUN coordination was confirmed, with the rest of the peptide mostly unstructured. The diffusion rates of A, Pd(II)-A and their mixture determined using PGSE-NMR experiment suggested that the Pd(II) complex forms a supramolecular assembly with the apopeptide. These results confirm that Pd(II) substitution enables NMR studies of structural aspects of Cu(II)-A complexes. View Full-Text
Keywords: Alzheimer’s disease; Aβ peptide; NMR spectroscopy; 13C relaxation; Palladium(II); ATCUN motif Alzheimer’s disease; Aβ peptide; NMR spectroscopy; 13C relaxation; Palladium(II); ATCUN motif
►▼ Show Figures 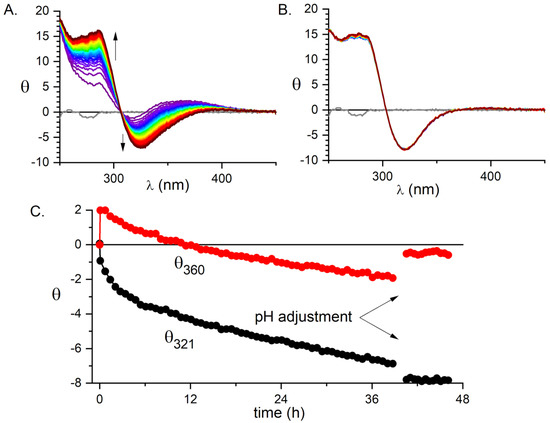