RAGE Signaling in Melanoma Tumors
Next Article in Special Issue

Bisphenol A (BPA) is an endocrine disruptor that negatively affects spermatogenesis, a process where Sertoli cells play a central role. Thus, in the present study we sought to ascertain whether BPA could modulate the endocannabinoid (eCB) system in exposed mouse primary Sertoli cells. Under our experimental conditions, BPA turned out to be cytotoxic to Sertoli cells with an half-maximal inhibitory concentration (IC50) of ~6.0 µM. Exposure to a non-cytotoxic dose of BPA (i.e., 0.5 μM for 48 h) increased the expression levels of specific components of the eCB system, namely: type-1 cannabinoid (CB1) receptor and diacylglycerol lipase-α (DAGL-α), at mRNA level, type-2 cannabinoid (CB2) receptor, transient receptor potential vanilloid 1 (TRPV1) receptors, and DAGL-β, at protein level. Interestingly, BPA also increased the production of inhibin B, but not that of transferrin, and blockade of either CB2 receptor or TRPV1 receptor further enhanced the BPA effect. Altogether, our study provides unprecedented evidence that BPA deranges the eCB system of Sertoli cells towards CB2- and TRPV1-dependent signal transduction, both receptors being engaged in modulating BPA effects on inhibin B production. These findings add CB2 and TRPV1 receptors, and hence the eCB signaling, to the other molecular targets of BPA already known in mammalian cells. View Full-Text
Keywords: endocrine disruptor; inhibin B; male reproduction; receptor signalling; spermatogenesis endocrine disruptor; inhibin B; male reproduction; receptor signalling; spermatogenesis
►▼ Show Figures 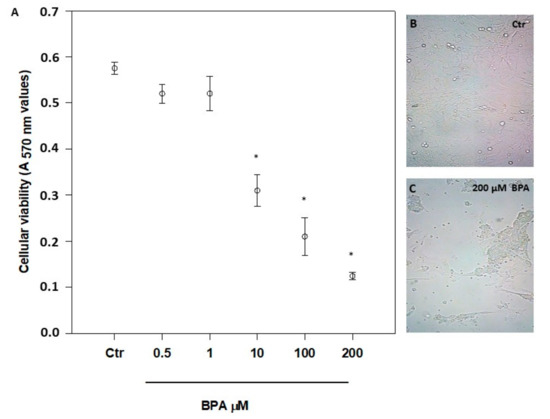