Growth by Insertion: The Family of Bacterial DDxP Proteins
Previous Article in Journal

The symbiotic Wolbachia are the most sophisticated mutualistic bacterium among all insect-associated microbiota. Wolbachia-insect relationship fluctuates from the simple facultative/parasitic to an obligate nutritional-mutualistic association as it was the case of the bedbug-Wolbachia from Cimexlectularius. Understanding this association may help in the control of associated arthropods. Genomic data have proven to be reliable tools in resolving some aspects of these symbiotic associations. Although, Wolbachia appear to be fastidious or uncultivated bacteria which strongly limited their study. Here we proposed Drosophila S2 cell line for the isolation and culture model to study Wolbachia strains. We therefore isolated and characterized a novel Wolbachia strain associated with the bedbug Cimexhemipterus, designated as wChem strain PL13, and proposed Wolbachiamassiliensis sp. nov. strain wChem-PL13 a type strain of this new species from new supergroup T. Phylogenetically, T-supergroup was close to F and S-supergroups from insects and D-supergroup from filarial nematodes. We determined the 1,291,339-bp genome of wChem-PL13, which was the smallest insect-associated Wolbachia genomes. Overall, the wChem genome shared 50% of protein coding genes with the other insect-associated facultative Wolbachia strains. These findings highlight the diversity of Wolbachia genotypes as well as the Wolbachia-host relationship among Cimicinae subfamily. The wChem provides folate and riboflavin vitamins on which the host depends, while the bacteria had a limited translation mechanism suggesting its strong dependence to its hosts. However, the clear-cut distinction between mutualism and parasitism of the wChem in C. hemipterus cannot be yet ruled out. View Full-Text
Keywords: Wolbachia; bedbug; Cimex hemipterus; isolation; culture; genomics; B-vitamins Wolbachia; bedbug; Cimex hemipterus; isolation; culture; genomics; B-vitamins
►▼ Show Figures 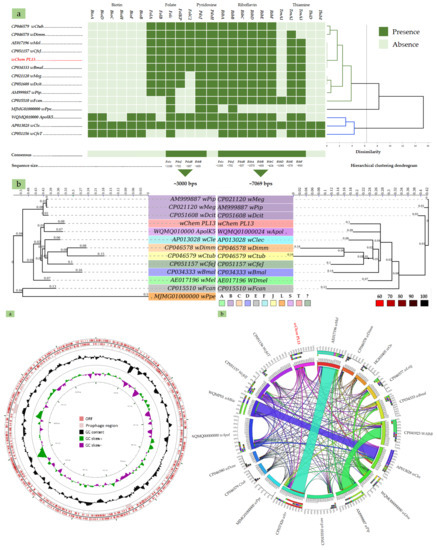