Non-Coding RNAs Participate in the Regulation of CRY-DASH in the Growth and Early Development of Saccharina japonica (Laminariales, Phaeophyceae)

The mechanisms of action of the complex including entomopathogenic nematodes of the genera Steinernema and Heterorhabditis and their mutualistic partners, i.e., bacteria Xenorhabdus and Photorhabdus, have been well explained, and the nematodes have been commercialized as biological control agents against many soil insect pests. However, little is known regarding the nature of the relationships between these bacteria and the gut microbiota of infected insects. In the present study, 900 bacterial isolates that were obtained from the midgut samples of Melolontha melolontha larvae were screened for their antagonistic activity against the selected species of the genera Xenorhabdus and Photorhabdus. Twelve strains exhibited significant antibacterial activity in the applied tests. They were identified based on 16S rRNA and rpoB, rpoD, or recA gene sequences as Pseudomonas chlororaphis, Citrobacter murliniae, Acinetobacter calcoaceticus, Chryseobacterium lathyri, Chryseobacterium sp., Serratia liquefaciens, and Serratia sp. The culture filtrate of the isolate P. chlororaphis MMC3 L3 04 exerted the strongest inhibitory effect on the tested bacteria. The results of the preliminary study that are presented here, which focused on interactions between the insect gut microbiota and mutualistic bacteria of entomopathogenic nematodes, show that bacteria inhabiting the gut of insects might play a key role in insect resistance to entomopathogenic nematode pressure. View Full-Text
Keywords: Melolontha melolontha; midgut microbiota; entomopathogenic nematodes; bacterial interactions; Xenorhabdus; Photorhabdus Melolontha melolontha; midgut microbiota; entomopathogenic nematodes; bacterial interactions; Xenorhabdus; Photorhabdus
►▼ Show Figures 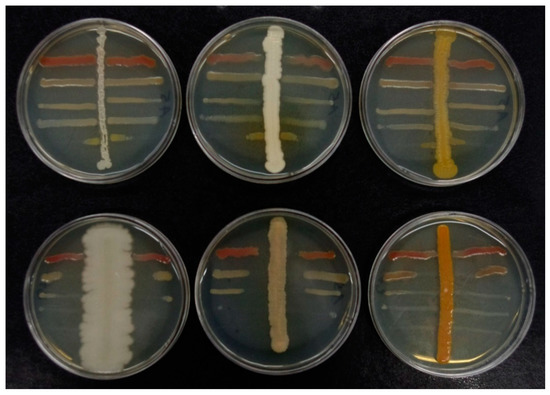