:
Lipopolysaccharide (LPS), commonly known as endotoxin, is ubiquitous and the most-studied pathogen-associated molecular pattern. A component of Gram-negative bacteria, extracellular LPS is sensed by our immune system via the toll-like receptor (TLR)-4. Given that TLR4 is membrane bound, it recognizes LPS in the extracellular milieu or within endosomes. Whether additional sensors, if any, play a role in LPS recognition within the cytoplasm remained unknown until recently. The last decade has seen an unprecedented unfolding of TLR4-independent LPS sensing pathways. First, transient receptor potential (TRP) channels have been identified as non-TLR membrane-bound sensors of LPS and, second, caspase-4/5 (and caspase-11 in mice) have been established as the cytoplasmic sensors for LPS. Here in this review, we detail the brief history of LPS discovery, followed by the discovery of TLR4, TRP as the membrane-bound sensor, and our current understanding of caspase-4/5/11 as cytoplasmic sensors.
Keywords:
LPS; endotoxin; TLR4; TRPA1; TRPV4; caspase-11

Lipopolysaccharide (LPS) is an important cell wall constituent of Gram-negative bacteria and is vital for bacterial cell integrity, viability, and defense against environmental stress [1]. Lipopolysaccharide is highly conserved among almost all Gram-negative bacteria and is a potent inducer of inflammatory responses. It exists ubiquitously in the environment and, thus, LPS can directly modulate the immune system and susceptibility to disease [2]. Lipopolysaccharide is a heat stable amphiphilic molecule composed of three regions: lipophilic lipid A, hydrophilic polysaccharides or oligosaccharide core, and O-antigen (Figure 1). The lipid A portion of LPS has been demonstrated to be the immunostimulatory moiety of LPS. Studies of various Gram-negative bacteria show that the structure of lipid A is diverse among bacterial species, and the number of acyl chains (fatty acid) determines the immunostimulatory capacity of LPS. Nonetheless, highly immunostimulatory LPS comprises comparatively similar lipid A with six acyl chains. For example, both Escherichia coli and Salmonella enterica serovar Typhimurium comprise hexa-acylated lipid A which are highly immunostimulatory [3,4,5].
The discovery of LPS dates back to the eighteenth century with the search for a substance found in putrid matter that was believed to cause fever. Later, Robert Koch (1843–1910) showed that various diseases were caused by bacteria. Richard Friedrich Johannes Pfeiffer (1858–1910) demonstrated that some bacteria consisted of a heat stable, non-volatile pyrogenic substance that caused disease and termed it “endotoxin” to distinguish it from exotoxins that are released by bacteria. Subsequently, endotoxin was shown to characterize Gram-negative bacteria. By the 1940s, pure extracts of endotoxin were prepared and demonstrated to be made of a small portion of lipid A and polysaccharide, hence named lipopolysaccharide. In the 1980s, Tetsuo Shiba et al. [6,7] synthesized free lipid A molecule and proved it to be the endotoxic center of LPS.
Intensive research in the field of innate immunity has led to the identification of a myriad of pattern recognition receptors (PRRs) on host immune cells that recognize non-self-molecules, i.e., pathogen-associated molecular patterns (PAMPs) derived from various pathogens including LPS. Extracellular LPS is a potent PAMP recognized by toll-like receptor-4 (TLR4) which is a PRR present on the surface of phagocytic cells like macrophages, neutrophils, and dendritic cells. Recognition of LPS by TLR4 induces a signaling cascade that eventually induces inflammation and production of the pro-inflammatory cytokines that help eliminate invading pathogens [8,9]. Conversely, excessive production of pro-inflammatory cytokines leads to life-threatening pathological consequences such as septic shock [10,11].
While TLR4 was thought to be the only sensor for LPS, recent studies have provided insight into two TLR4-independent LPS recognition systems: transient receptor potential (TRP) channel-dependent sensing of extracellular LPS and caspase-4/5/11-dependent sensing of intracellular LPS. Extracellular LPS sensed by TRP channels present on the neuronal cells drives neurogenic inflammation and pain in mice [12]. Caspase-4/5 in humans and caspase-11 in mice sense intracellular LPS within the cytoplasm of innate immune cells, such as macrophages, to drive production of pro-inflammatory cytokines IL-1β and IL-18 and inflammatory cell death, termed pyroptosis [13,14,15].
This review provides an overview of the current state of knowledge regarding LPS structure and immunogenicity. We further discuss the literature and provide specific details about the TLR4-dependent and TLR4-indepdent LPS recognition systems that have been uncovered recently.

Studies of various Gram-negative bacteria suggest a common general structure of LPS. The membrane-embedded lipophilic lipid A is usually composed of a dimer of glucosamine (D-GlcN) attached to acyl chains by ester or amide linkages. Lipid A is covalently attached to hydrophilic anionic groups, 3-deoxy-d-manno-2-octulosonic acid (Kdo) in the core region together with L-glycero-D-manno-heptose (l,d-Hep) and hexoses and hexosamines. In most Gram-negative strains, the core region is attached to the repeated units of saccharides called O-polysaccharides or O-antigens [1,16,17]. O-antigens vary among bacterial strains and give bacteria a rough (R-type) or smooth (S-type) phenotype. O-antigens are truncated or lacking in R-type when compared to S-type Gram-negative bacteria. As the outermost part of LPS, O-antigens are responsible for bacteria evading the immune system, particularly the complement system of the host (e.g., Salmonella enterica serovar Typhimurium) [9,18]. Lipid A as well as the polysaccharide regions are able to induce potent immune responses [16,19,20,21,22]. The lipid A component, independent of the polysaccharide portion, is responsible for various pathophysiological effects including toxicity, mitogenicity, complement reactivity [23,24], and Limulus lysate gelation [7,25,26]. Galanos et al. [25] demonstrated that solubilized lipid A administered to mice and rabbits induced toxicity and pyrogenicity. Furthermore, soluble lipid A demonstrated the properties of intact LPS, i.e., lethal toxicity and pyrogenicity induced by lipid A was comparable to their corresponding parent LPS. Furthermore, chemically synthesized E. coli lipid A has demonstrated identical endotoxic activities as natural free lipid A, further supporting lipid A as the endotoxic center of LPS [19,25,26].
The immunogenic potential of LPS varies among bacterial species and is mostly determined by the structure of lipid A [7,27]. Based on the potency of the pro-inflammatory reaction, LPS can be agonistic, weakly agonistic or antagonistic. Generally, the LPS present in major Gram-negative bacteria are agonistic and hexa-acylated (six acyl chains are esterified with disaccharide backbone) and are therefore potent immunostimulants. The structure of Lipid A can vary in number, length, position of esterified acyl chain, and number of phosphate groups, resulting in various degrees of immunogenicity [3,28]. The tetra-acylated lipid A structure found in Yersinia pestis grown at 37 °C has very low immunogenic activity and has been shown to be a TLR4 antagonist [29]. Similarly, Francisella tularensis expresses lpxD1 lipid A biosynthase acyl transferase at 37 °C which synthesizes the tetra-acylated lipid A of a longer acyl chain length with lower activity [30].
Studies have demonstrated that, in addition to lipid A, charged molecules, such as phosphate groups, have a direct impact on the interaction between phagocytic cells and cytokine production. For example, both hexa-acyl groups and two phosphate groups of E. coli are required for full activation of the TLR4/MD2 complex [19]. Similarly, Francisella tularensis demonstrates weak endotoxic activity when one or both phosphate groups are lacking, compared to hexa-acylated Escherichia coli lipid A with two phosphate groups at the 1 and 4 positions [31,32]. In addition, several studies have demonstrated the contribution of inner core sugars (two Kdo moieties) of LPS in inflammatory responses [22]. Studies with N. meningitids LPS variants and the synthetic lipid A variants showed the important role of two Kdo with lipid A; in fact, the response of human monocyte-derived dendritic cells to N. meningitids Re-LPS was higher compared to lipid A alone [33]. Similarly, the production of proinflammatory cytokines, like TNFα and IFN-β, were significantly higher in the murine macrophages when stimulated with synthetic N. meningitids Re-LPS compared to lipid A, and similar results were observed with E. coli [34] and Salmonella LPS [35]. Thus, the structural features of these components are directly related to the virulence of Gram-negative bacteria and their ability to evade immune detection. Understanding the intricate process of LPS recognition by the host immune system can provide important insight into the nature and magnitude of inflammatory responses.

The last decade has seen unprecedented progress in our understanding of host LPS recognition systems. From TLR4 as the sole LPS sensing mechanism, we now have two additional LPS recognition systems: the TRP channels and caspase-11. As discussed in this review, all of these recognition systems have non-redundant functions and allow the host different ways and opportunities to swiftly recognize, respond, and clear the LPS-bearing pathogen which is how the host comes into contact with LPS most of the time. Conversely, hyperactivation of these pathways, as is the case in sepsis, often results in multiorgan failure and death of the host without medical intervention. The fact that we have employed so many different ways to recognize LPS underscores the importance of this molecule as a pathogen-associated molecular pattern. These new pathways that have been discovered not only expand our knowledge of the complex LPS sensing pathways but will also pave the way for translational research for the benefit of human health.

We thank Kristina Greiner for her editing assistance in preparing our manuscript. The figures were generated using BioRender (www.biorender.com). This work was supported by NIAID (K22AI127836) and The University of Iowa Startup funds to P.G. 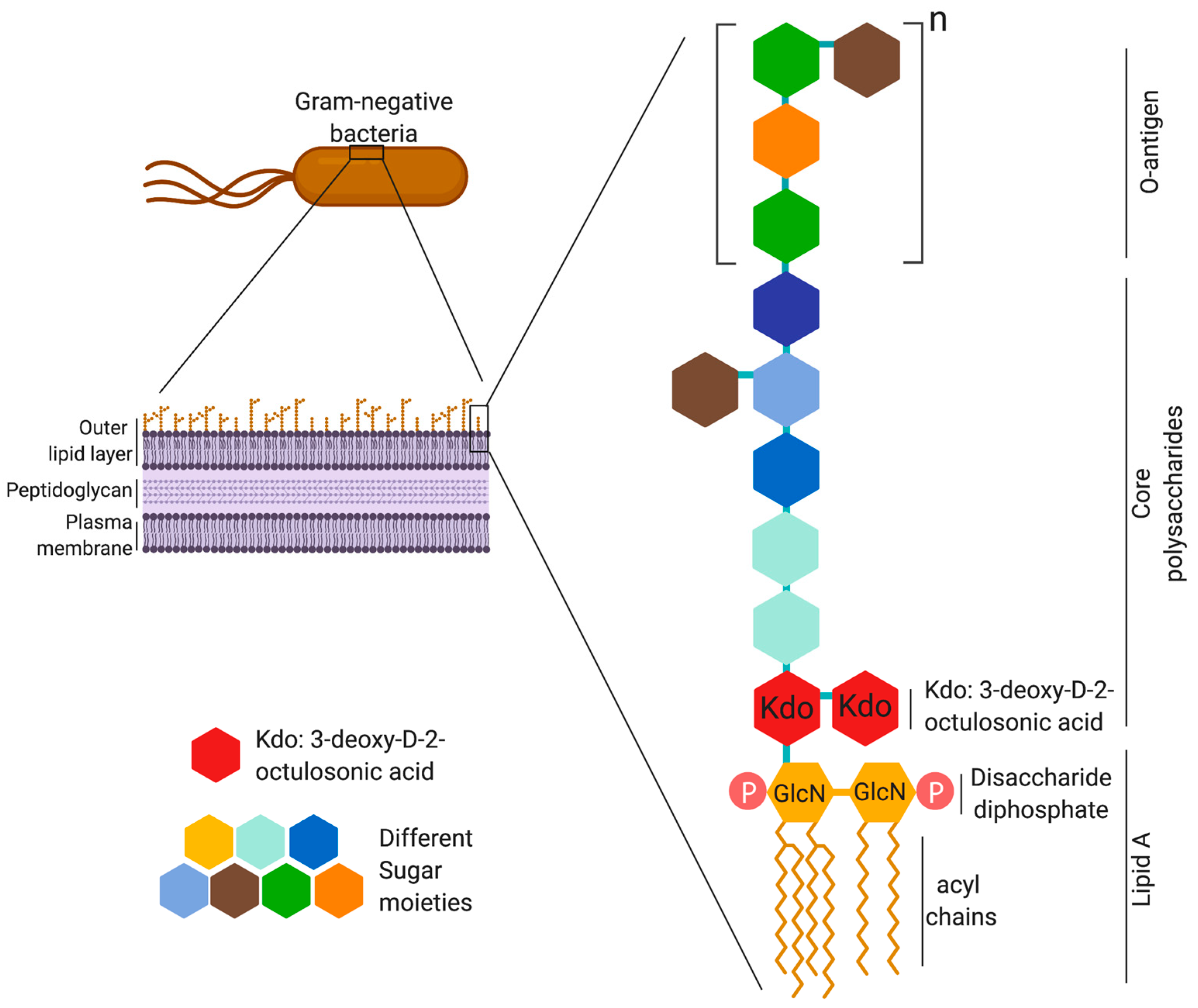 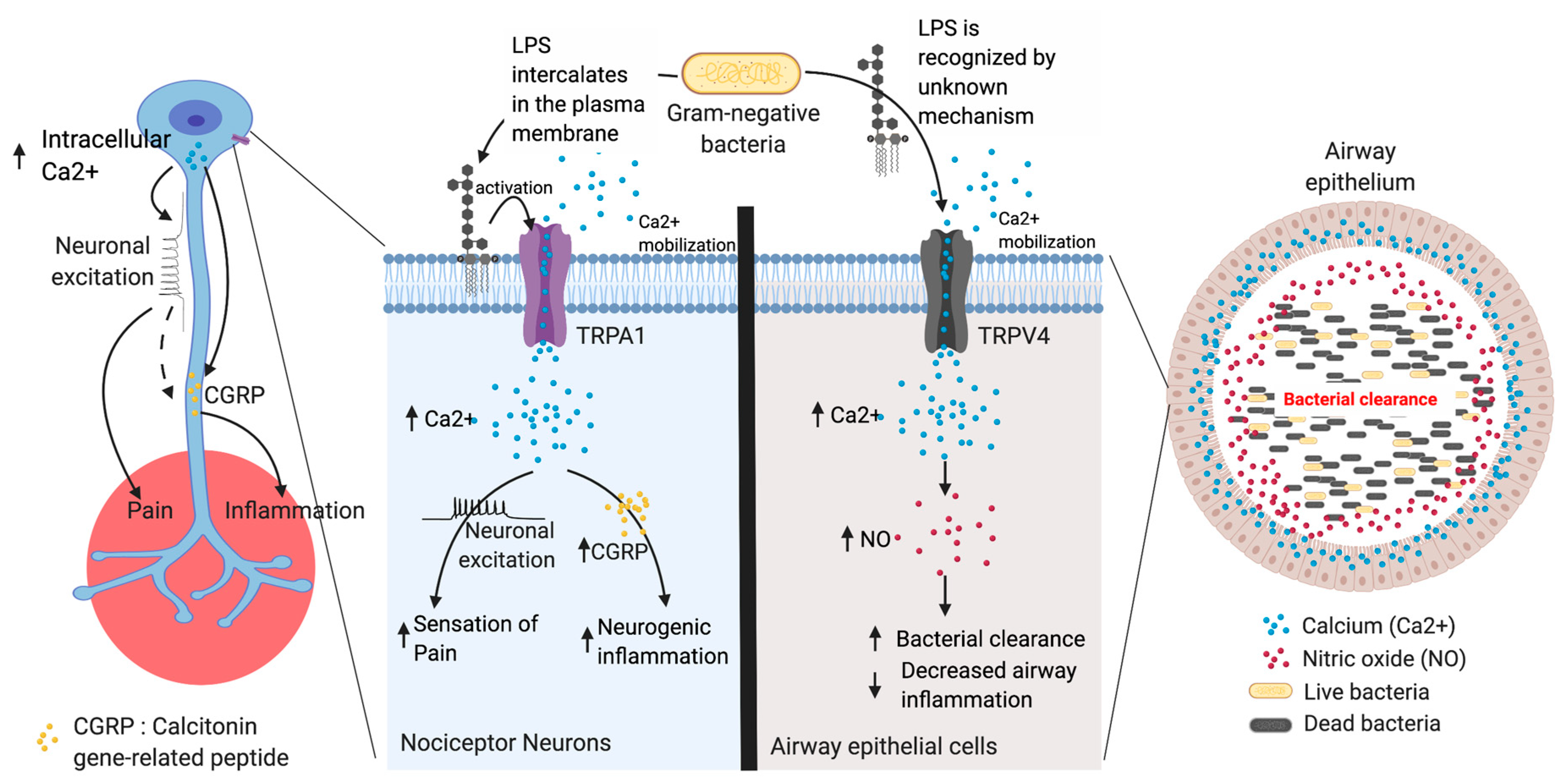 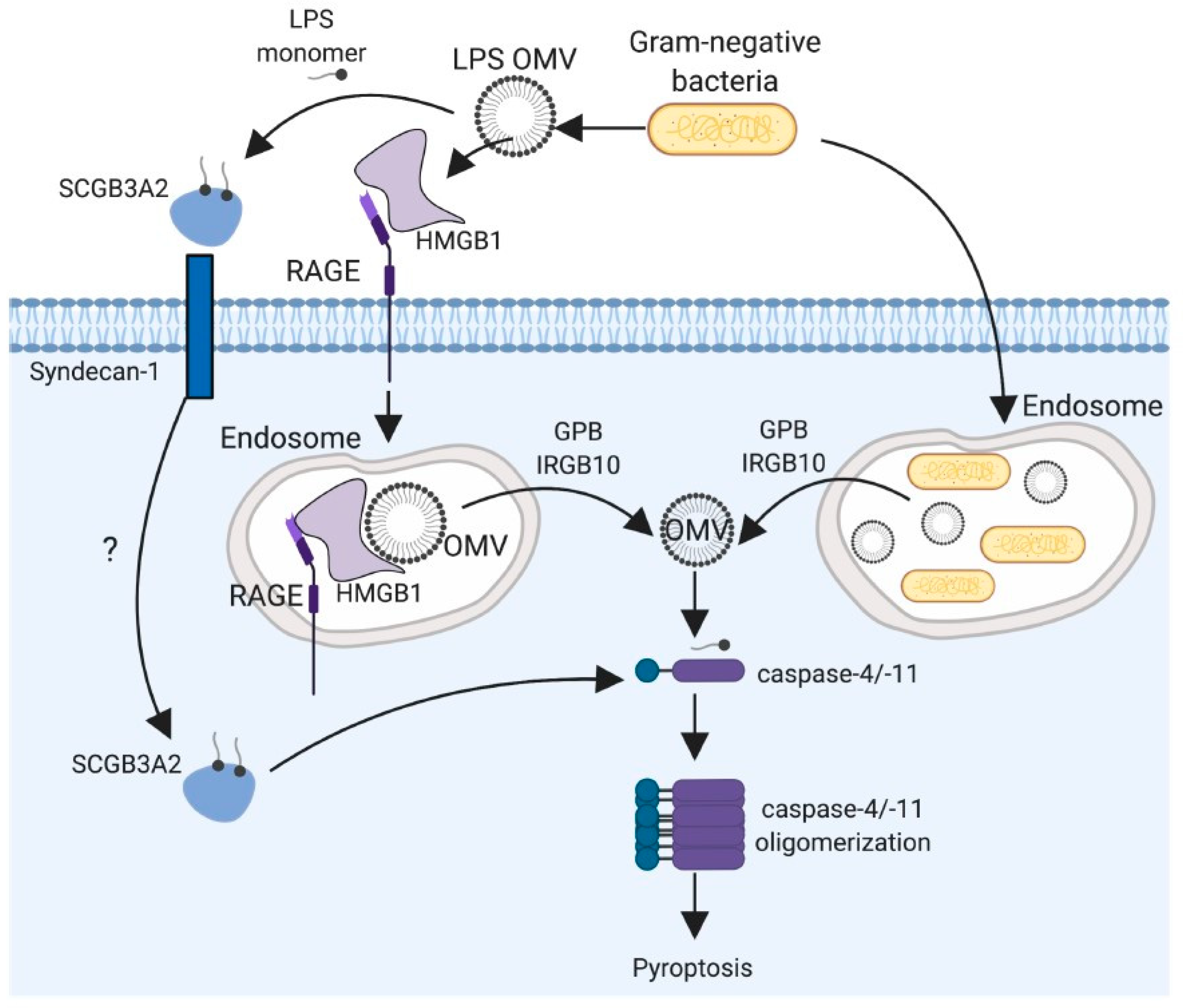