Update on the Neurobiology of Vascular Cognitive Impairment: From Lab to Clinic

Heavy metals are considered a continuous threat to humanity, as they cannot be eradicated. Prolonged exposure to heavy metals/metalloids in humans has been associated with several health risks, including neurodegeneration, vascular dysfunction, metabolic disorders, cancer, etc. Small blood vessels are highly vulnerable to heavy metals as they are directly exposed to the blood circulatory system, which has comparatively higher concentration of heavy metals than other organs. Cerebral small vessel disease (CSVD) is an umbrella term used to describe various pathological processes that affect the cerebral small blood vessels and is accepted as a primary contributor in associated disorders, such as dementia, cognitive disabilities, mood disorder, and ischemic, as well as a hemorrhagic stroke. In this review, we discuss the possible implication of heavy metals/metalloid exposure in CSVD and its associated disorders based on in-vitro, preclinical, and clinical evidences. We briefly discuss the CSVD, prevalence, epidemiology, and risk factors for development such as genetic, traditional, and environmental factors. Toxic effects of specific heavy metal/metalloid intoxication (As, Cd, Pb, Hg, and Cu) in the small vessel associated endothelium and vascular dysfunction too have been reviewed. An attempt has been made to highlight the possible molecular mechanism involved in the pathophysiology, such as oxidative stress, inflammatory pathway, matrix metalloproteinases (MMPs) expression, and amyloid angiopathy in the CSVD and related disorders. Finally, we discussed the role of cellular antioxidant defense enzymes to neutralize the toxic effect, and also highlighted the potential reversal strategies to combat heavy metal-induced vascular changes. In conclusion, heavy metals in small vessels are strongly associated with the development as well as the progression of CSVD. Chelation therapy may be an effective strategy to reduce the toxic metal load and the associated complications. View Full-Text
Keywords: heavy metals; small vessel diseases; oxidative stress; endothelial dysfunction; ROS heavy metals; small vessel diseases; oxidative stress; endothelial dysfunction; ROS
►▼ Show Figures 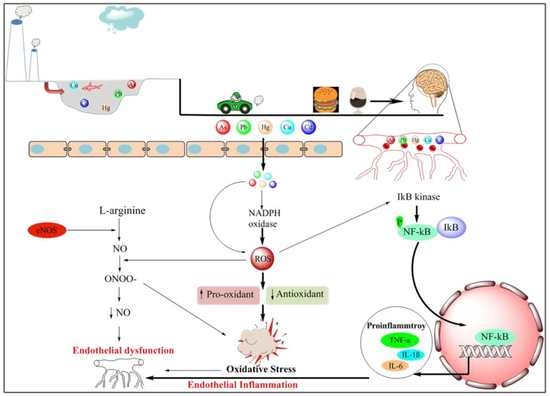