Design, Synthesis and Molecular Modeling Study of Conjugates of ADP and Morpholino Nucleosides as A Novel Class of Inhibitors of PARP-1, PARP-2 and PARP-3
Previous Article in Special Issue

Many native structures of proteins accomodate complex topological motifs such as knots, lassos, and other geometrical entanglements. How proteins can fold quickly even in the presence of such topological obstacles is a debated question in structural biology. Recently, the hypothesis that energetic frustration might be a mechanism to avoid topological frustration has been put forward based on the empirical observation that loops involved in entanglements are stabilized by weak interactions between amino-acids at their extrema. To verify this idea, we use a toy lattice model for the folding of proteins into two almost identical structures, one entangled and one not. As expected, the folding time is longer when random sequences folds into the entangled structure. This holds also under an evolutionary pressure simulated by optimizing the folding time. It turns out that optmized protein sequences in the entangled structure are in fact characterized by frustrated interactions at the closures of entangled loops. This phenomenon is much less enhanced in the control case where the entanglement is not present. Our findings, which are in agreement with experimental observations, corroborate the idea that an evolutionary pressure shapes the folding funnel to avoid topological and kinetic traps. View Full-Text
Keywords: protein folding; entanglement; topological frustration protein folding; entanglement; topological frustration
►▼ Show Figures 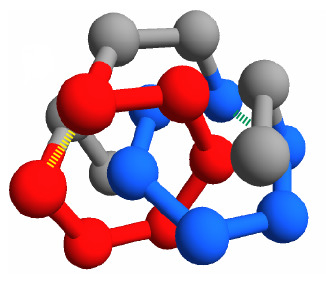