Natural History of a Satellite DNA Family: From the Ancestral Genome Component to Species-Specific Sequences, Concerted and Non-Concerted Evolution

Satellite DNA (satDNA) is the most variable fraction of the eukaryotic genome. Related species share a common ancestral satDNA library and changing of any library component in a particular lineage results in interspecific differences. Although the general developmental trend is clear, our knowledge of the origin and dynamics of satDNAs is still fragmentary. Here, we explore whole genome shotgun Illumina reads using the RepeatExplorer (RE) pipeline to infer satDNA family life stories in the genomes of Chenopodium species. The seven diploids studied represent separate lineages and provide an example of a species complex typical for angiosperms. Application of the RE pipeline allowed by similarity searches a determination of the satDNA family with a basic monomer of ~40 bp and to trace its transformation from the reconstructed ancestral to the species-specific sequences. As a result, three types of satDNA family evolutionary development were distinguished: (i) concerted evolution with mutation and recombination events; (ii) concerted evolution with a trend toward increased complexity and length of the satellite monomer; and (iii) non-concerted evolution, with low levels of homogenization and multidirectional trends. The third type is an example of entire repeatome transformation, thus producing a novel set of satDNA families, and genomes showing non-concerted evolution are proposed as a significant source for genomic diversity. View Full-Text
Keywords: satellite DNA; genome evolution; plants; next-generation sequencing; high order repeats satellite DNA; genome evolution; plants; next-generation sequencing; high order repeats
►▼ Show Figures 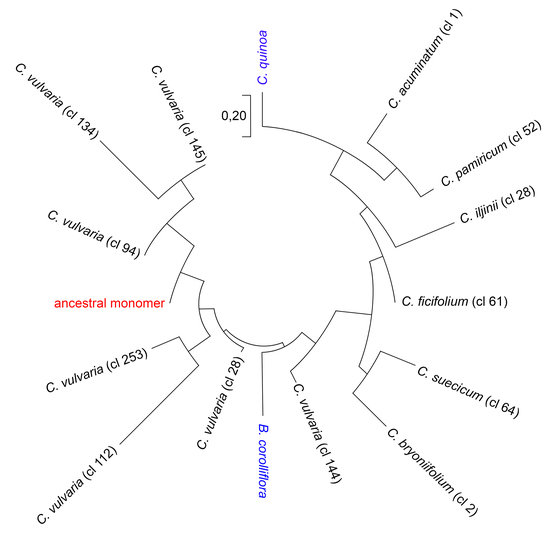