Signal Transduction in Ribosome Biogenesis: A Recipe to Avoid Disaster
Next Article in Special Issue

Exercise and Sirtuins: A Way to Mitochondrial Health in Skeletal Muscle

The sirtuins form a family of evolutionarily conserved nicotinamide adenine dinucleotide (NAD)-dependent deacetylases. Seven sirtuins (SIRT1–SIRT7) have been described in mammals, with specific intracellular localization and biological functions associated with mitochondrial energy homeostasis, antioxidant activity, proliferation and DNA repair. Physical exercise affects the expression of sirtuin in skeletal muscle, regulating changes in mitochondrial biogenesis, oxidative metabolism and the cellular antioxidant system. In this context, sirtuin 1 and sirtuin 3 have been the most studied. This review focuses on the effects of different types of exercise on these sirtuins, the molecular pathways involved and the biological effect that is caused mainly in healthy subjects. The reported findings suggest that an acute load of exercise activates SIRT1, which in turn activates biogenesis and mitochondrial oxidative capacity. Additionally, several sessions of exercise (training) activates SIRT1 and also SIRT3 that, together with the biogenesis and mitochondrial oxidative function, jointly activate ATP production and the mitochondrial antioxidant function.
Keywords: exercise; health; mitochondria; PGC-1α; SIRT1; SIRT3; skeletal muscle; therapeutic target exercise; health; mitochondria; PGC-1α; SIRT1; SIRT3; skeletal muscle; therapeutic target

The seven sirtuins present in mammals (SIRT1–SIRT7) are a family of class III histone deacetylases [1,2] that regulate histone proteins in specific lysine residues, promoting post-translational modification resulting in chromatin silencing and transcriptional repression. In addition to histone proteins, other proteins are also deacetylated by sirtuins, modulating their activity [3,4]. It is now known that the enzymatic activity of sirtuins is broader—they not only act as deacetylases, but also as ADP ribosyl-transferases, demalonylase and desuccinylase, all of which require binding with NAD [5,6]. In addition, it has been postulated that the function of sirtuins depends on their intracellular location [2].
The wide spectrum of cellular activities of sirtuins in the organism places them as therapeutic targets to combat metabolic, neurodegenerative and proliferative diseases. In this context, in underdeveloped and developed countries, diseases related to obesity, such as insulin resistance, type 2 diabetes and dyslipidemia have become a public health problem. Among the strategies to prevent or combat such diseases is exercise. Exercise positively affects the activity and/or expression of sirtuins, resulting in better oxidative metabolism efficiency, increased biogenesis and mitochondrial function, as well as maintenance of the antioxidant system [2].
In the last two decades, evidence has accumulated about the effect of exercise on the expression and/or activity of sirtuins. Much of this knowledge has emerged from research in animal and cellular models, and to a lesser extent from studies in humans, in most cases, in healthy humans. In this review we summarize the evidence about the effects of different types of exercise on SIRT1 and SIRT3 in skeletal muscle, mostly in healthy individuals, and the role of such sirtuins as regulators of the benefits of exercise.

3. Effects of Different Type of Exercise on the Sirtuins in Human Skeletal Muscle

In conclusion, the effects of exercise on SIRT1 and SIRT3 in human skeletal muscle will depend on the type of exercise (Figure 1). The effect of acute exercise has been studied in both SIRT1 and SIRT3; the results indicate that SIRT1, and not SIRT3, is activated after a single load of exercise, apparently as an effect of increased phosphorylation of AMPK. The increase in SIRT1 leads to an increase in PGC-1α. The effect of exercise training on sirtuins has been studied with several sessions of HIIT or aerobic exercise. Investigations with HIIT have focused on analyzing the effect on SIRT1—these investigations provide evidence that the benefits of this type of training are regulated through the increase in SIRT1 and PGC-1α; however, there is little evidence on the effect on both sirtuins.
Meanwhile, the effect of interventions with aerobic training has been studied only on SIRT3. The results indicate that after several sessions of aerobic training there is an increase of SIRT3 in sedentary individuals and increases in PGC-1α. In addition, NAMPT also increases as an effect of exercise, allowing the synthesis of NAD+, the main substrate of sirtuins.
Due to the methodological complexity, the investigations have focused on some part of the metabolic pathway. The information we currently have is complemented by the results of all these investigations, even the animal and cellular models. It is known that exercise activates each one of the sirtuin pathways in different ways, but the outcome is common: to improve the mitochondrial health, which places them as therapeutic targets for the treatment of metabolic diseases such as obesity, insulin resistance and type 2 diabetes. So, in order to identify exercise training that can efficiently achieve greater improvement in these metabolic states, it will be necessary to perform more research that evaluates the effect of different types of exercise on both sirtuins and the health benefits in metabolically compromised individuals of different ages and different fitness level.

This work was financially supported by University of Guanajuato. 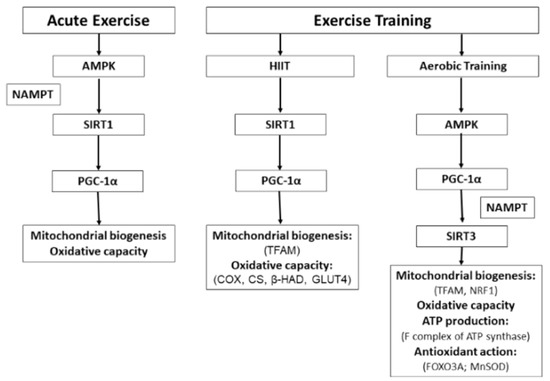 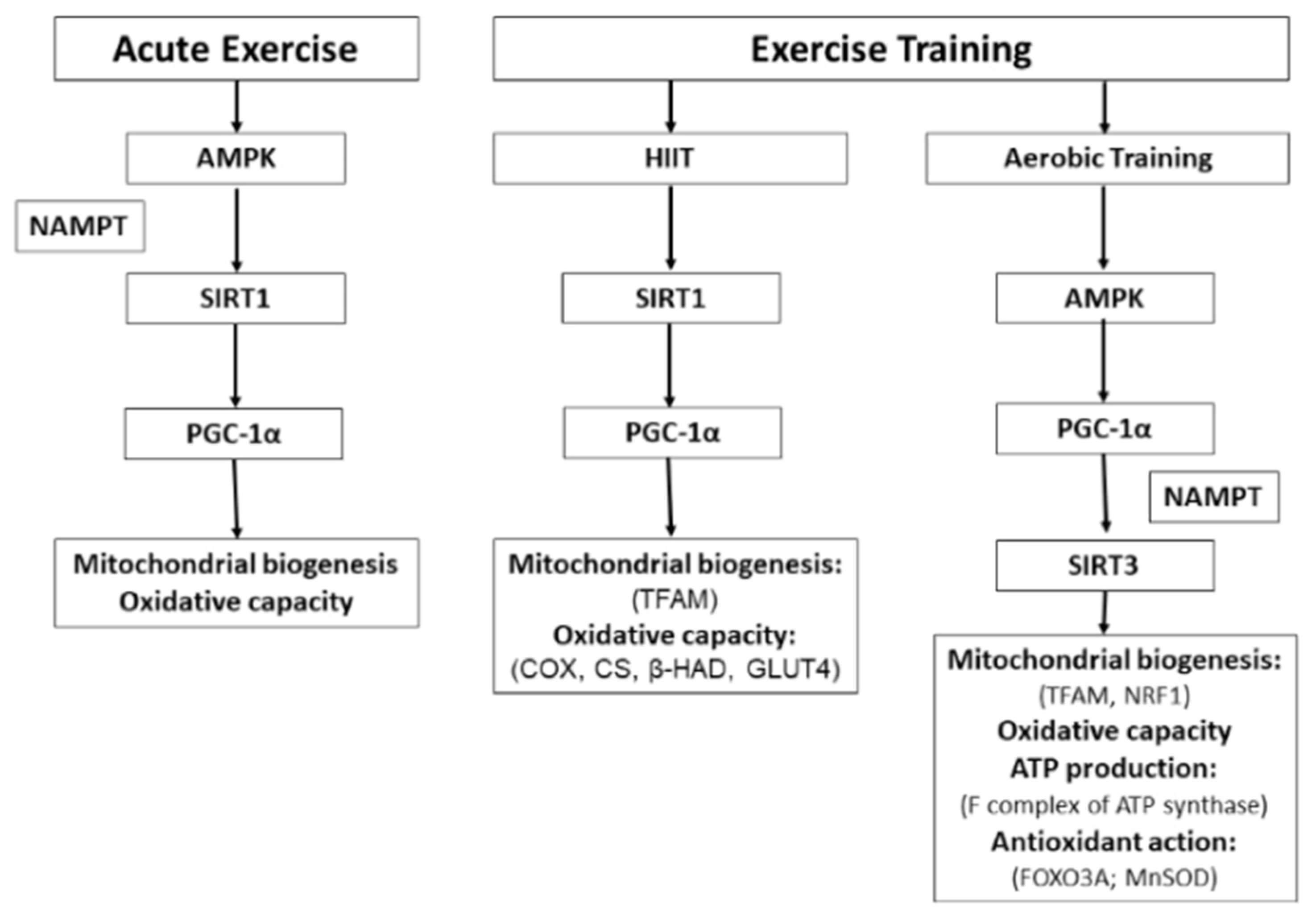