Management of Diabetes Mellitus in Normal Renal Function, Renal Dysfunction and Renal Transplant Recipients, Focusing on Glucagon-Like Peptide-1 Agonist: A Review Based upon Current Evidence
Next Article in Special Issue

Exercise and Sirtuins: A Way to Mitochondrial Health in Skeletal Muscle

by Débora Kristina Alves-Fernandes and

Sirtuin-1 (SIRT1) is a class-III histone deacetylase (HDAC), an NAD+-dependent enzyme deeply involved in gene regulation, genome stability maintenance, apoptosis, autophagy, senescence, proliferation, aging, and tumorigenesis. It also has a key role in the epigenetic regulation of tissue homeostasis and many diseases by deacetylating both histone and non-histone targets. Different studies have shown ambiguous implications of SIRT1 as both a tumor suppressor and tumor promoter. However, this contradictory role seems to be determined by the cell type and SIRT1 localization. SIRT1 upregulation has already been demonstrated in some cancer cells, such as acute myeloid leukemia (AML) and primary colon, prostate, melanoma, and non-melanoma skin cancers, while SIRT1 downregulation was described in breast cancer and hepatic cell carcinomas. Even though new functions of SIRT1 have been characterized, the underlying mechanisms that define its precise role on DNA damage and repair and their contribution to cancer development remains underexplored. Here, we discuss the recent findings on the interplay among SIRT1, oxidative stress, and DNA repair machinery and its impact on normal and cancer cells. View Full-Text
Keywords: SIRT1; DNA damage/repair; epigenetics; cancer development SIRT1; DNA damage/repair; epigenetics; cancer development
►▼ Show Figures 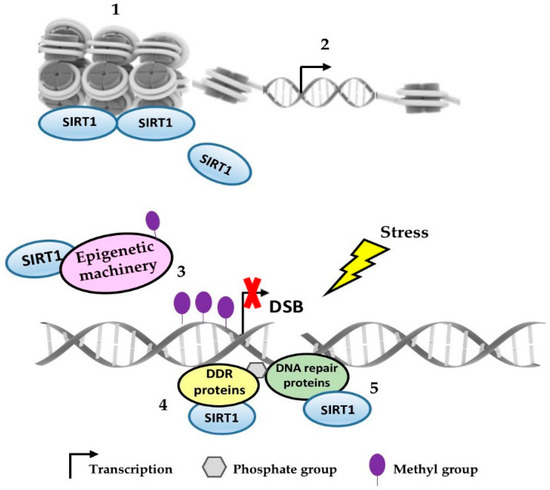