Thylakoid rhodanase-like protein (TROL) is involved in the final step of photosynthetic electron transport from ferredoxin to ferredoxin: NADP+ oxidoreductase (FNR). TROL is located in two distinct chloroplast compartments—in the inner envelope of chloroplasts, in its precursor form; and in the thylakoid membranes, in its fully processed form. Its role in the inner envelope, as well as the determinants for its differential localization, have not been resolved yet. In this work we created six N-terminal amino acid substitutions surrounding the predicted processing site in the presequence of TROL in order to obtain a construct whose import is affected or localization limited to a single intrachloroplastic site. By using in vitro transcription and translation and subsequent protein import methods, we found that a single amino acid exchange in the presequence, Ala67 to Ile67 interferes with processing in the stroma and directs the whole pool of in vitro translated TROL to the inner envelope of chloroplasts. This result opens up the possibility of studying the role of TROL in the chloroplast inner envelope as well as possible consequence/s of its absence from the thylakoids. View Full-Text
Keywords: TROL; protein import; chloroplasts; dual localization; ATP; inner envelope membrane; thylakoids TROL; protein import; chloroplasts; dual localization; ATP; inner envelope membrane; thylakoids
►▼ Show Figures 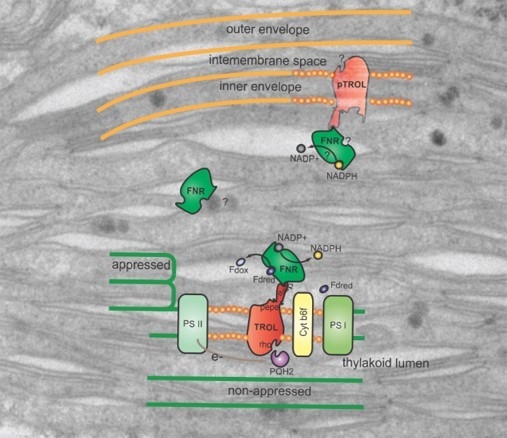