Excitotoxins, Mitochondrial and Redox Disturbances in Multiple Sclerosis
Next Article in Special Issue

Organic–inorganic hybrid molecules constitute analytical tools used in biological systems. Vascular endothelial cells synthesize and secrete proteoglycans, which are macromolecules consisting of a core protein and glycosaminoglycan side chains. Although the expression of endothelial proteoglycans is regulated by several cytokines/growth factors, there may be alternative pathways for proteoglycan synthesis aside from downstream pathways activated by these cytokines/growth factors. Here, we investigated organic–inorganic hybrid molecules to determine a variant capable of analyzing the expression of syndecan-4, a transmembrane heparan-sulfate proteoglycan, and identified 1,10-phenanthroline (o-Phen) with or without zinc (Zn-Phen) or rhodium (Rh-Phen). Bovine aortic endothelial cells in culture were treated with these compounds, and the expression of syndecan-4 mRNA and core proteins was determined by real-time reverse transcription polymerase chain reaction and Western blot analysis, respectively. Our findings indicated that o-Phen and Zn-Phen specifically and strongly induced syndecan-4 expression in cultured vascular endothelial cells through activation of the hypoxia-inducible factor-1α/β pathway via inhibition of prolyl hydroxylase-domain-containing protein 2. These results demonstrated an alternative pathway involved in mediating induction of endothelial syndecan-4 expression and revealed organic–inorganic hybrid molecules as effective tools for analyzing biological systems.
Keywords: endothelial cells; proteoglycan; 1,10-phenanthroline; syndecan-4; bioorganometallics endothelial cells; proteoglycan; 1,10-phenanthroline; syndecan-4; bioorganometallics

HIF-1α levels are regulated by its degradation via the ubiquitin-proteasome pathway following hydroxylation of HIF-1α Pro564 in the oxygen-dependent degradation domain (ODD) by prolyl hydroxylase domain-containing protein 2 (PHD2) [23]. We transfected a pcDNA-ODD-Luc vector into vascular endothelial cells (Figure 4A), followed by treatment with o-Phen, Zn-Phen, or Rh-Phen and measurement of PHD2 activity (Figure 4B). We observed significantly reduced PHD2 activity in the presence of o-Phen or Zn-Phen, but not Rh-Phen, and no changes in the amount of ubiquitinated proteins after treatment with o-Phen or Zn-Phen (Figure 4C), indicating that o-Phen- and Zn-Phen-mediated induction of HIF-1α expression was not due to stimulation of the ubiquitin-proteasome pathway.

Vascular endothelial cells were cultured in a humidified atmosphere of 5% CO2 at 37 °C in DMEM supplemented with 10% FBS until confluence or subconfluence. The medium was discarded, and the cells were used for experiments after washing twice with serum-free DMEM.

Transfection of siRNAs was performed using Lipofectamine RNAiMAX according to manufacturer protocol. Briefly, annealed siRNA duplex and Lipofectamine RNAiMAX were dissolved in Opti-MEM in separate tubes and incubated for 5 min at room temperature, followed by mixing and incubation for 20 min at room temperature. Vascular endothelial cells were grown to near subconfluence in DMEM supplemented with 10% FBS and then incubated at 37 °C for 12 h in fresh DMEM supplemented with 10% FBS in the presence of the siRNA/Lipofectamine RNAiMAX mixture. The final concentrations of siRNA and Lipofectamine RNAiMAX were 18 nM and 0.09%, respectively. The medium was then changed to DMEM, and the cells were treated for 12, 24, 36, and 48 h with o-Phen, Zn-Phen, Rh-Phen, ZnCl2, or RhCl3. The sequences of sense and antisense siRNAs were as follows: bovine HIF-1α siRNA (siHIF-1α), 5′-GGGAUUAACUCAGUUUGAACUdTdT-3′ (sense) and 5′-UUCAAACUGAGUUAAUCCCAUdTdT-3′ (antisense); bovine HIF-2α siRNA (siHIF-2α), 5′-AUUUUUGAGGCUCAAGUUCUC-3′ (sense) and 5′-GAACUUGAGCCUCAAAAAUGG-3′ (antisense); bovine HIF-1β siRNA (siHIF-1β), 5′-GAACUCUUAGGAAAGAAUAUUdTdT-3′ (sense) and 5′-UAUUCUUUCCUAAGAGUUCCUdTdT-3′ (antisense); bovine AhR siRNA (siAhR), 5′-AUUAAGUCGGUCUCUAUGCCU-3′ (sense) and 5′-GCAUAGAGACCGACUUAAUAC-3′ (antisense). Negative control siRNA (siControl; Qiagen, Valencia, CA, USA) was used as a nonspecific sequence.

Firefly luciferase-reporter plasmid pGL4.12 (Promega, Fitchburg, WI, USA) was treated with restriction enzymes HindIII and XbaI, and the luciferase-containing fragments were inserted into the pcDNA3.1(+) vector (Invitrogen, Carlsbad, CA, USA) digested with the same two restriction enzymes to create a luciferase-containing pcDNA (pcDNA-Luc). Bovine HIF-1α ODD cDNA and stop-codon-insertion (STOP) cDNA were cloned from RT-PCR products from bovine vascular endothelial cells using TaKaRa Ex Taq and primers. ODD primers were designed using the NCBI database (Accession no. NM_174339_3) and the NEBuilder Assembly Tool (New England Biolabs). The sequences of the forward and reverse primers were as follows: ODD, 5′-CTGGCTAGCGTTTAAACTTAATGTTCAAGTTGGAATTGG-3′ and 5′-CCAACAGTACCGGATTGCCAAGGAGGTTCTTTAGGTACG-3′, respectively; STOP, 5′-GAGAATTCATAACACCCTCAAGATTGTCAGCAA-3′ and 5′-CACTCTAGAACAGTCTTCTGGGTGGCAGTGA-3′, respectively. The ODD PCR product was assembled using pcDNA-Luc digested with HindIII and using the NEBuilder HiFi DNA assembly cloning kit (New England Biolabs). The STOP PCR products digested with EcoRI and XbaI were inserted into the assembled plasmid digested with the same two restriction enzymes to create pcDNA-ODD-Luc. The DNA sequence of the pcDNA-ODD-Luc vector was analyzed by Eurofin Genomics (Tokyo, Japan). The mRNA expression from ODD-Luc was measured by real-time RT-PCR. The sequence of forward and reverse primers for ODD-Luc was 5′-CTGGCTAACTAGAGAACCCACTG-3′ and 5′-AGGGGCAAACAACAGATGG-3′, respectively. The amplicon was electrophoresed in a 1% agarose gel, stained with ethidium bromide, and visualized using a LAS 3000 Imager (Fujifilm).

pcDNA-ODD-Luc and the Renilla luciferase-expression plasmid pRL-SV40 (Promega) were transfected into vascular endothelial cells using Lipofectamine LTX and PLUS reagents according to manufacturer instructions. Confluent cultures of vascular endothelial cells were prepared in 24-well culture plates. Plasmid vectors and PLUS reagent in Opti-MEM and Lipofectamine LTX in Opti-MEM were prepared in separate tubes and mixed, followed by incubation for 5 min at room temperature. Confluent vascular endothelial cells were prepared in fresh DMEM supplemented with 10% FBS, and the mixture was added to the medium. The final concentrations of pcDNA-ODD-Luc, pRL-SV40, Lipofectamine LTX, and PLUS reagent were 230 ng/mL, 0.46 ng/mL, 0.09%, and 0.04%, respectively. After a 12-h incubation, the medium was discarded, and the cells were incubated with 5 µM of o-Phen, Zn-Phen, or Rh-Phen. After 24 h, luciferase activity in the cells was measured using the dual-luciferase reporter assay and a GloMax 20/20n luminometer (Promega). The luminescent intensity value of firefly luciferase was normalized to that of Renilla luciferase, and the PHD2-activity index was calculated from the corresponding relative luciferase activity.

Data were analyzed for statistical significance by analysis of variance and Student’s t test or Tukey’s method as appropriate. A p < 0.05 was considered statistically significant.

Our results showed that the application of organic–inorganic hybrid molecules may be an effective strategy for analyzing the regulatory mechanisms associated with vascular endothelial cells. 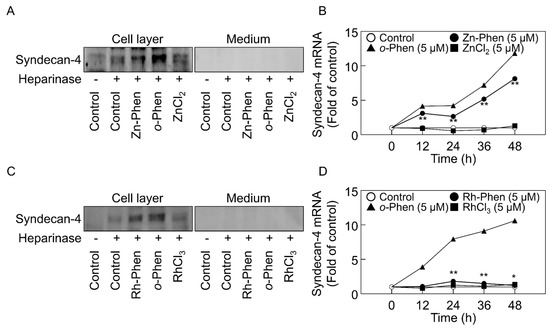 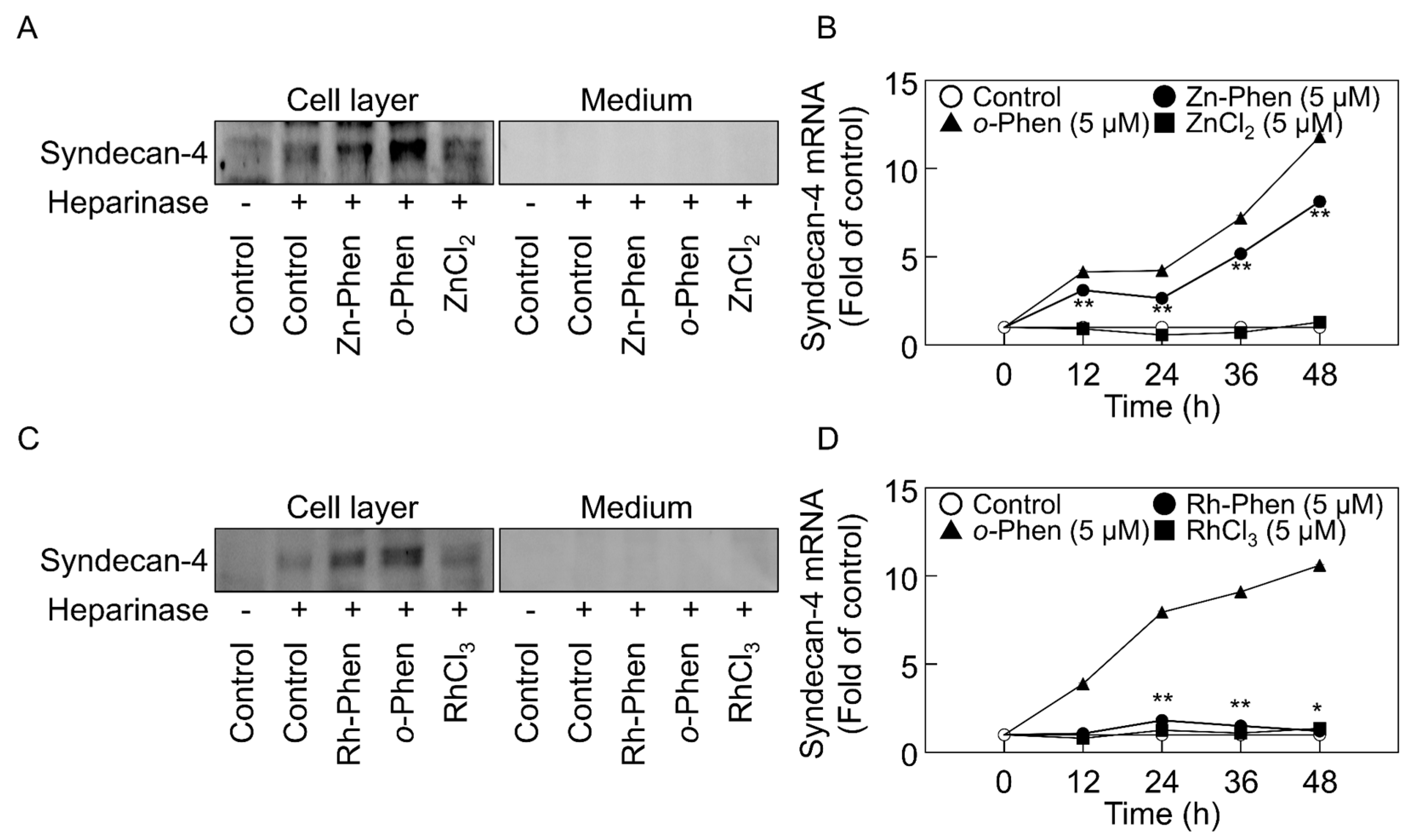 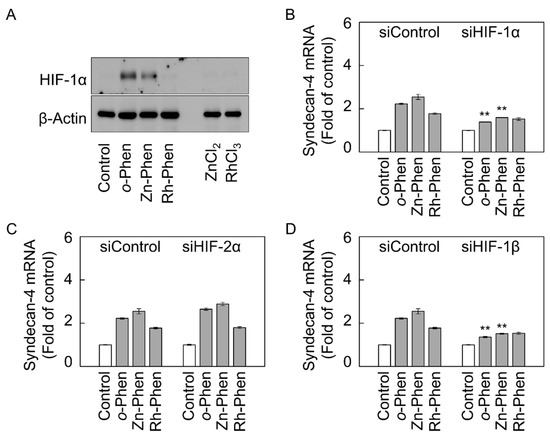