Curcumol, isolated from the traditional medical plant Rhizoma Curcumae, is the bioactive component of Zedoary oil, whose potential anti-tumor effect has attracted considerable attention in recent years. Though many researchers have reported curcumol and its bioactivity, the potential molecular mechanism for its anti-cancer effect in colorectal cancer LoVo cells still remains unclear. In the present study, we found that curcumol showed growth inhibition and induced apoptosis of LoVo cells in a dose- and time-dependent manner. The occurrence of its proliferation inhibition and apoptosis came with suppression of IGF-1R expression, and then increased the phosphorylation of p38 mitogen activated protein kinase (MAPK), which might result in a cascade response by inhibiting the CREB survival pathway and finally triggered Bax/Bcl-2 and poly(ADP-ribose) polymerase 1 (PARP-1) apoptosis signals. Moreover, curcumol inhibited colorectal cancer in xenograft models of nude mice. Immunohistochemical and Western blot analysis revealed that curcumol could decrease the expression of ki-67, Bcl-2 as well as CREB1, and increase the expression of Bax and the phosphorylation of p38, which were consistent with our in vitro study. Overall, our in vitro and in vivo data confirmed the anti-cancer activity of curcumol, which was related to a significant inhibition of IGF-1R and activation of p38 MAPKs, indicating that curcumol may be a potential anti-tumor agent for colorectal carcinoma therapy. View Full-Text
Keywords: curcumol; colorectal cancer; anti-tumor; IGF-1R; p38 MAPK curcumol; colorectal cancer; anti-tumor; IGF-1R; p38 MAPK
►▼ Show Figures 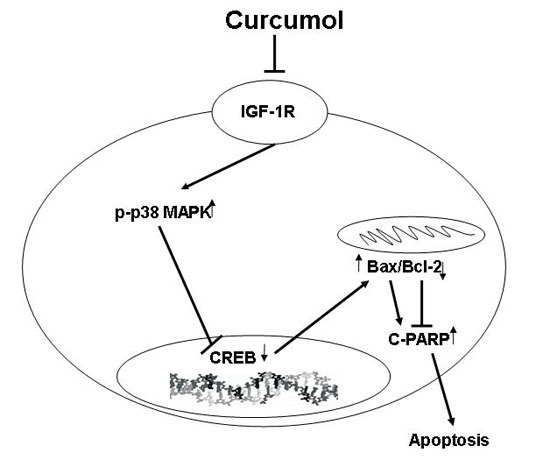