Mechanism of Type IA Topoisomerases
Next Article in Special Issue

Metabolism and Functions of Inositol Pyrophosphates: Insights Gained from the Application of Synthetic Analogues

On a Magical Mystery Tour with 8-Bromo-Cyclic ADP-Ribose: From All-or-None Block to Nanojunctions and the Cell-Wide Web

A plethora of cellular functions are controlled by calcium signals, that are greatly coordinated by calcium release from intracellular stores, the principal component of which is the sarco/endooplasmic reticulum (S/ER). In 1997 it was generally accepted that activation of various G protein-coupled receptors facilitated inositol-1,4,5-trisphosphate (IP3) production, activation of IP3 receptors and thus calcium release from S/ER. Adding to this, it was evident that S/ER resident ryanodine receptors (RyRs) could support two opposing cellular functions by delivering either highly localised calcium signals, such as calcium sparks, or by carrying propagating, global calcium waves. Coincidentally, it was reported that RyRs in mammalian cardiac myocytes might be regulated by a novel calcium mobilising messenger, cyclic adenosine diphosphate-ribose (cADPR), that had recently been discovered by HC Lee in sea urchin eggs. A reputedly selective and competitive cADPR antagonist, 8-bromo-cADPR, had been developed and was made available to us. We used 8-bromo-cADPR to further explore our observation that S/ER calcium release via RyRs could mediate two opposing functions, namely pulmonary artery dilation and constriction, in a manner seemingly independent of IP3Rs or calcium influx pathways. Importantly, the work of others had shown that, unlike skeletal and cardiac muscles, smooth muscles might express all three RyR subtypes. If this were the case in our experimental system and cADPR played a role, then 8-bromo-cADPR would surely block one of the opposing RyR-dependent functions identified, or the other, but certainly not both. The latter seemingly implausible scenario was confirmed. How could this be, do cells hold multiple, segregated SR stores that incorporate different RyR subtypes in receipt of spatially segregated signals carried by cADPR? The pharmacological profile of 8-bromo-cADPR action supported not only this, but also indicated that intracellular calcium signals were delivered across intracellular junctions formed by the S/ER. Not just one, at least two. This article retraces the steps along this journey, from the curious pharmacological profile of 8-bromo-cADPR to the discovery of the cell-wide web, a diverse network of cytoplasmic nanocourses demarcated by S/ER nanojunctions, which direct site-specific calcium flux and may thus coordinate the full panoply of cellular processes. View Full-Text
Keywords: 8-bromo-cADPR; cADPR; calcium; hypoxic pulmonary vasoconstriction; sarcoplasmic reticulum; KV7; ryanodine receptor; two pore channel 2; arterial smooth muscle; nanojunction; nanospace; nanocourse; nucleus; nuclear invagination 8-bromo-cADPR; cADPR; calcium; hypoxic pulmonary vasoconstriction; sarcoplasmic reticulum; KV7; ryanodine receptor; two pore channel 2; arterial smooth muscle; nanojunction; nanospace; nanocourse; nucleus; nuclear invagination
►▼ Show Figures 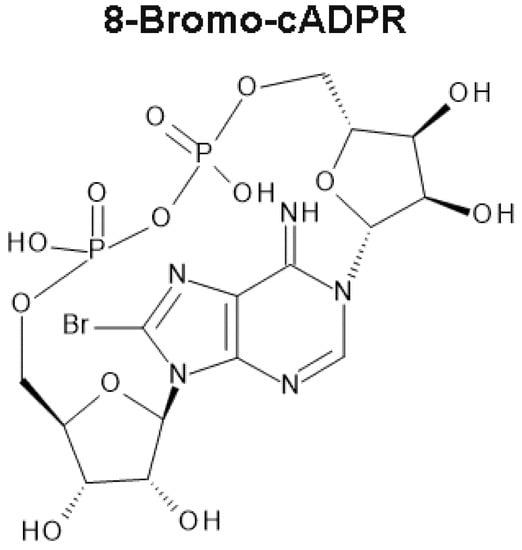 Evans, A.M. On a Magical Mystery Tour with 8-Bromo-Cyclic ADP-Ribose: From All-or-None Block to Nanojunctions and the Cell-Wide Web. Molecules 2020, 25, 4768.