In diabetes mellitus, the excessive rate of glucose production from the liver is considered a primary contributor for the development of hyperglycemia, in particular, fasting hyperglycemia. In this study, we investigated whether kaempferol, a flavonol present in several medicinal herbs and foods, can be used to ameliorate diabetes in an animal model of insulin deficiency and further explored the mechanism underlying the anti-diabetic effect of this flavonol. We demonstrate that oral administration of kaempferol (50 mg/kg/day) to streptozotocin-induced diabetic mice significantly improved hyperglycemia and reduced the incidence of overt diabetes from 100% to 77.8%. This outcome was accompanied by a reduction in hepatic glucose production and an increase in glucose oxidation in the muscle of the diabetic mice, whereas body weight, calorie intake, body composition, and plasma insulin and glucagon levels were not altered. Consistently, treatment with kaempferol restored hexokinase activity in the liver and skeletal muscle of diabetic mice while suppressed hepatic pyruvate carboxylase activity and gluconeogenesis. These results suggest that kaempferol may exert antidiabetic action via promoting glucose metabolism in skeletal muscle and inhibiting gluconeogenesis in the liver.
Keywords: kaempferol; insulin deficiency; diabetes; hepatic glucose production; gluconeogenesis; pyruvate carboxylase kaempferol; insulin deficiency; diabetes; hepatic glucose production; gluconeogenesis; pyruvate carboxylase

Glucose levels are controlled by a sophisticated coordination of several pathways in both the feeding and fasting states. The increase in blood glucose levels in the portal vein post-absorption increases hepatic glucose uptake and subsequent metabolism, initiated by glucokinase (GCK) or hexokinase IV [1], and this hence increases glucose utilization and storage by the liver before it gets to the blood circulation [2]. Meanwhile, increased circulating glucose stimulates insulin secretion from pancreatic β-cells, which subsequently increases glycogen synthesis while inhibiting gluconeogenesis, thereby reducing hepatic glucose output [3,4]. In addition, muscle tissue plays a significant role in disposing blood glucose, which accounts for over one third of total disposed blood glucose as compared with about 40% by visceral organs (mostly by the liver) [5]. On the other hand, low glucose levels trigger glucagon release which simultaneously increases glucose production through hydrolysis of glycogen as well as gluconeogenesis in the liver [6,7]. Glucagon promotes the transcription of key glucogenic enzymes such as pyruvate carboxylase (PC) [8], phosphoenolpyruvate carboxykinase (PEPCK), and glucose-6-phosphatase (G6Pase) [9]. The liver is the major contributor of glucose flux into the circulation in the fasting state responsible for about 90% of the overall glucose production with the kidneys generating the rest of glucose output [10]. Besides, peripheral tissues, including the muscle and adipose tissues, provide the liver with glucogenic precursors, which are suppressed in the presence of insulin [11].
Type 1 diabetes (T1D) is an autoimmue disease that result from the immune cell-mediated destruction of pancreatic β-cells, thus causing insulin deficiency and hyperglycemia. T1D accounts for less than 10% of diabetes cases and accompanied by serious complications [12]. Like Type 2 diabetes (T2D), hepatic and peripheral glucose uptake and metabolism are also altered in T1D [13], which are associated with reduced GCK [14] and muscle hexokinase II (HK II) protein expression [15]. Additionally, it is accompanied by excessive hepatic glucose production which primarily contributes to fasting hyperglycemia, the hallmark of diabetes [16]. Due to insulin deficiency, glucagon stimulation of the key glucogenic enzymes is not restrained [17]. Indeed, the use of agents that suppress glucagon [18] or its action can prevent hyperglycemia in insulin-deficient rodent models of diabetes [19]. Despite advances in understanding T1D, there is no cure for it, and therefore patients require insulin administration for survival [20]. Continuous glucose monitoring and intensive treatment showed improvements in glycemic control of adult patients but weren’t efficient in younger patients who are more commonly diagnosed with this disease [21].
Kaempferol, a flavonol present in several medicinal herbs and edible plants [22], exerted many pharmacological activities in preclinical studies [23]. It has been reported that kaempferol elicits a number of health benefits, including anti-oxidative [24,25], anti-inflammatory [26,27], anti-hypertensive [28,29], lipolytic [30,31], and anti-carcinogenic effects [32,33,34]. However, limited number of studies examined the anti-diabetic properties of this compound. In the present study, we examined whether kaempferol possess anti-diabetic properties in a type 1-like diabetes, which was induced by intraperitoneal (ip) injection of multiple low doses of streptozotocin (STZ) to lean mice fed a standard chow (SD) diet [35]. Our data show that kaempferol treatment significantly ameliorated hyperglycemia in the short and long-term of treatment. Kaempferol treatment restored the activity of key enzymes, which play crucial roles in glucose metabolism such as hexokinases in the liver and muscle. Kaempferol reduced glucose output in the liver of diabetic mice, which was associated with a decrease in PC activity and glycogenolysis. These changes were independent of body weight gain, body composition, or changes in plasma insulin levels of diabetic mice. The data from this study indicate that kaempferol could be used for mitigating hyperglycemia caused by insulin deficiency.

In insulin-deficient mice, GCK expression in the liver decreases, which impairs hepatic glucose uptake and utilization [14]. We found that diabetic mice had lower GCK protein levels when compared to non-diabetic mice, while glucokinase regulatory protein (GCKRP) protein levels was similar between groups. Kaempferol treatment restored GCK activity (p < 0.05), whereas it had no effect on either GCK or GCKRP protein expression in diabetic mice (Figure 6a–c,e). This increase in the activity of GCK in the liver can direct more glucose into glycogen synthesis and indirectly reduces the overall glucose flux from the liver [1,2]. To determine whether kaempferol decreases glycogenolysis, thereby contributing to the reduced glucose output as noticed in kaempferol-treated mice, we measured glycogen contents in the liver.
As shown in Figure 6d, diabetic mice had lower glycogen contents (p < 0.05) as compared with the non-diabetic mice. However, treatment with kaempferol partially restored glycogen contents (p < 0.05) in diabetic mice (Figure 6d). To examine whether kaempferol may have any effect on channeling glucose to other destinations, we measured glucose oxidation in the liver. There was no effect of kaempferol treatment on glucose oxidation in the liver (Figure 6f).

BW and food intake were measured every week through the study. Blood glucose levels were measured biweekly using a glucometer (Kroger, Cincinnati, OH, USA). Body composition of the mice was examined at 0, 4, and 8 weeks after treatment using an LF-90 instrument (Bruker Optics, Inc., Billerica, MA, USA). Four and 6 weeks after treatment with kaempferol, mice fasted for 15 h were administered via i.p., injection a single dose of pyruvate (1 g/kg BW), or glucose (1 g/kg BW) for pyruvate and glucose tolerance tests, respectively. Blood glucose levels were then measured at 0, 30, 60, 90, and 180 min and 0, 15, 30, 60, and 120 min after administration of pyruvate or glucose. The area under the curve (AUC) for these tests was calculated using the trapezoidal rule [70]. At the end of the study, the mice were fasted for 15 h and were then euthanized between 9–11 a.m. Blood was collected immediately, and various organs were weighed and snap-frozen in liquid nitrogen and then stored at −80 °C for further analyses. Plasma lipid profile was analyzed by enzymatic methods using assay kits (Teco Diagnostics, Anaheim, CA, USA). Plasma insulin levels were measured using an ultrasensitive mouse insulin ELISA kit (Mercodia, Inc., Uppsala, Sweden). Plasma glucagon levels were measured using mouse glucagon ELISA kit (Crystal Chem, Downers Grove, IL, USA).

Fresh mouse liver and muscle (red) samples were used to analyze glucose oxidation as previously described [71,72] with modifications. Briefly, liver or muscle tissues were homogenized in the buffer (0.250 M Sucrose, 1 mM EDTA, 0.01 M Tris-HCl, and 2 mM ATP, pH = 7.4). The tissue homogenates were then incubated with 14C-labeled glucose (American Radiolabeled Chemicals, St. Louis, MO, USA) at 37 °C for 1 h. The 14CO2 generated was trapped with 70% perchloric acid and the resulting sodium hydroxide was then used to assess CO2 production.

Mouse liver was homogenized in phosphate buffer (pH 7.0), centrifuged (9500 rpm for 10 min at 4 °C), and the supernatants were then collected for measuring glycogen concentrations using a kit (Cayman, Ann Arbor, MI, USA).

The work was supported by grants from National Center for Complementary and Integrated Health of National Institutes of Health (1R01AT007077, 1R01AT007566-01) and Virginia Tech Open Access Subvention Fund. The contents of this manuscript are solely the responsibility of the authors and do not necessarily represent the official views of the funding agencies. 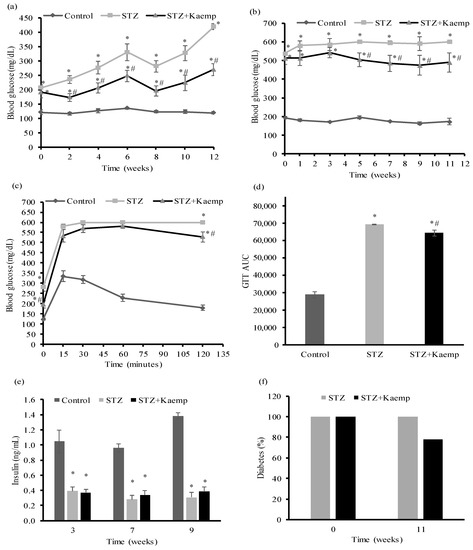 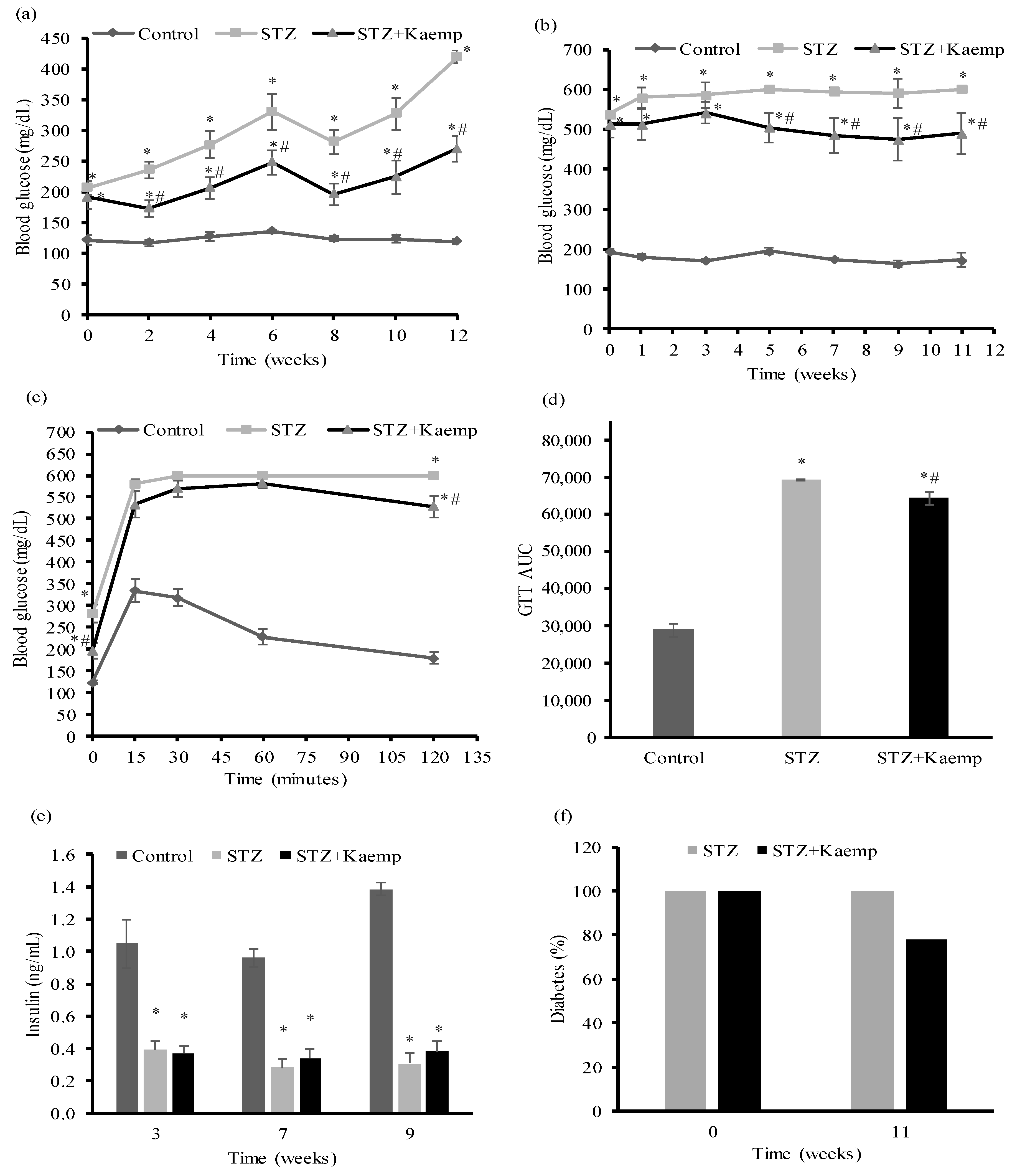 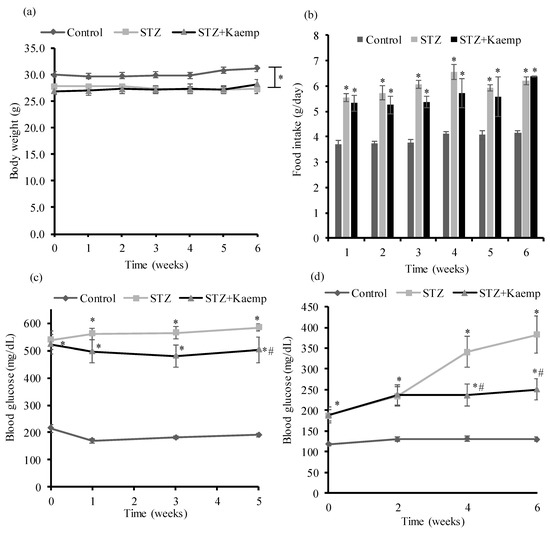 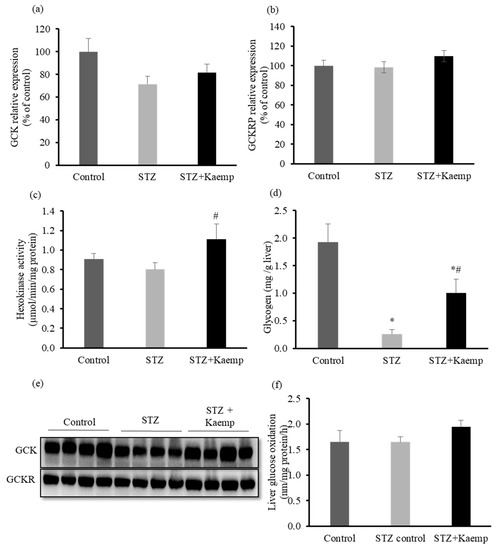 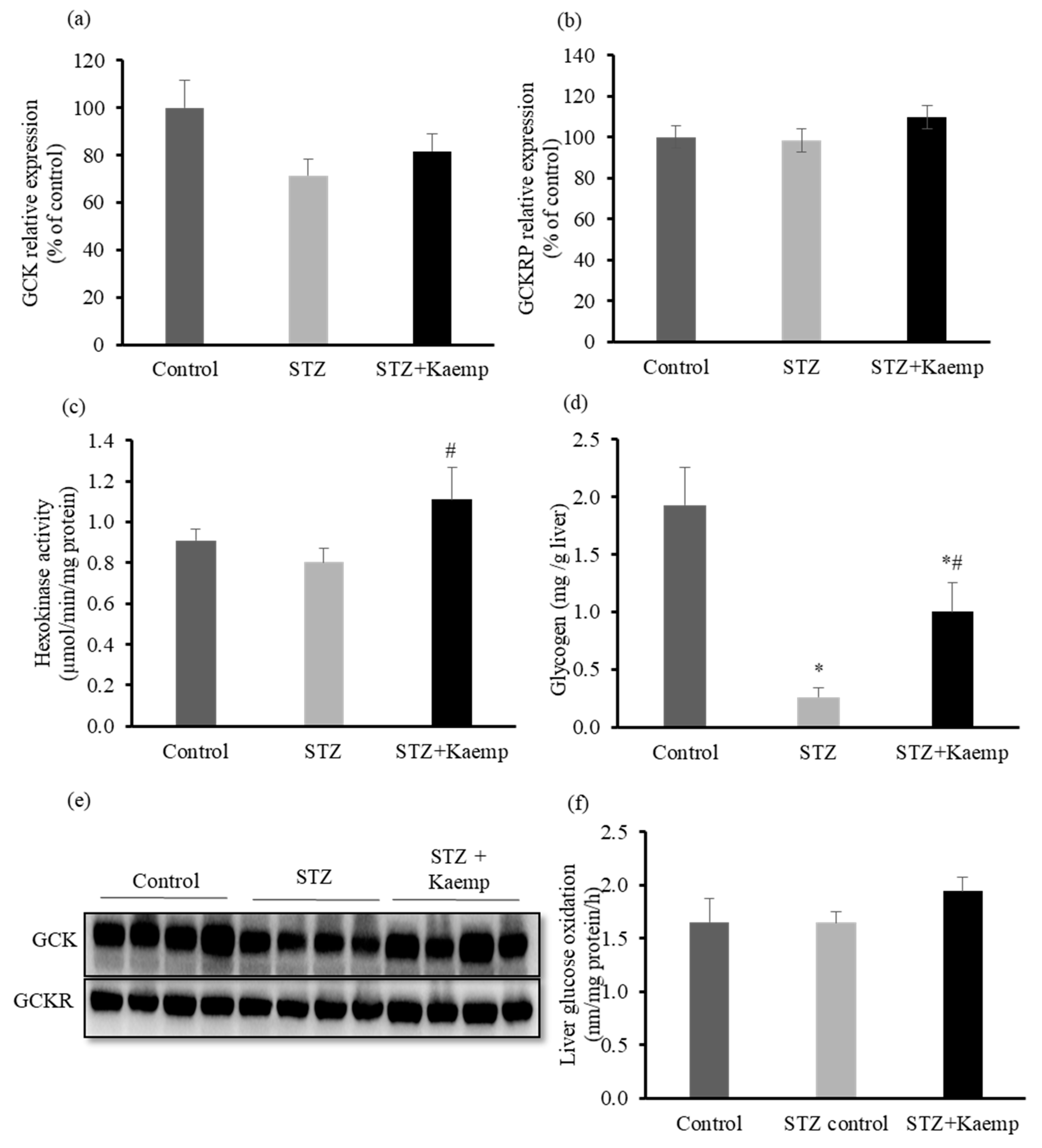 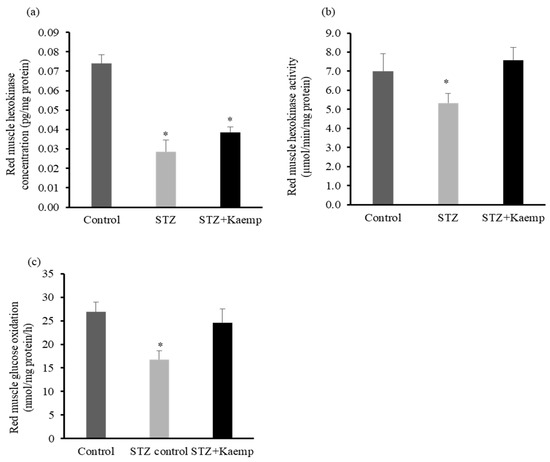 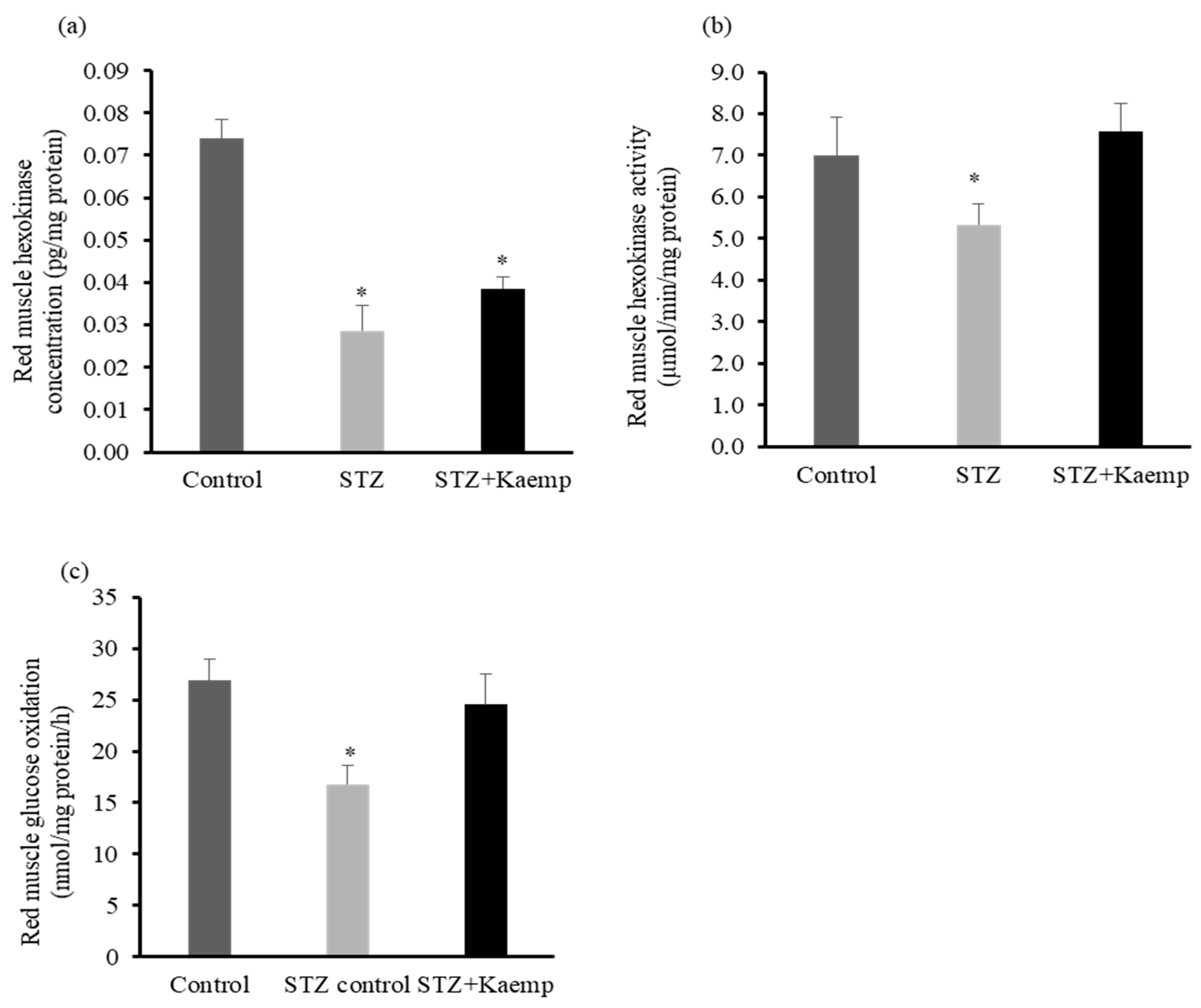