Extraction and Analysis of Phenolic Compounds in Rice: A Review

Plum edible part was used to obtained extracts by during a 4 h maceration process using three different solvents (ethanol, methanol and water) for the determination of total phenols and flavonoids, antioxidant capacity by (2,2′-azino-bis(3-ethylbenzothiazoline-6-sulfonic acid) diammonium salt (ABTS), 2,2-diphenyl-1-picrylhydrazyl (DPPH) and hemolysis inhibition in human blood assays. Subsequently, phenolic compounds were identified using ultra-performance liquid chromatography (UPLC-MS). The results indicated that the ethanolic extract of plum fruit being a good source of phenolic (12–18 mg GAE/g FW) and flavonoids (2.3–2.5 mg QE/g FW) content in both varieties of plum. Also, the fruits proved a good source of antioxidants as measured by DPPH and ABTS; likewise, plum aqueous extracts showed the highest protective effect on human erythrocytes with 74.34 and 64.62% for yellow and red plum, respectively. A total of 23 bioactive compounds were identified by UPLC-MS, including gallic acid, rutin, resorcinol, chlorogenic acid, catechin, and ellagic acid, and the antioxidant capacity can be attributed to these species. The edible part of plum contains compounds of biological interest, suggesting that this fruit has antioxidant potential that can be exploited for various technologies. View Full-Text
Keywords: phenolic compounds; Spondias spp.; UPLC-MS; antioxidant capacity phenolic compounds; Spondias spp.; UPLC-MS; antioxidant capacity
►▼ Show Figures 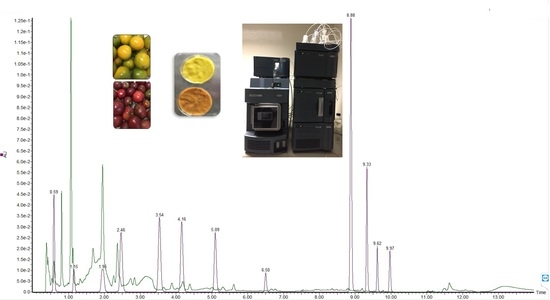