Improvement of Theory of Mind in Schizophrenia: A 15-Year Follow-Up Study
Previous Article in Journal

Retrieving a subset of items from memory can cause forgetting of other related items in memory, referred to as retrieval-induced forgetting (RIF). This type of forgetting (RIF) is thought to be related to working memory and executive control processes, of which are known to be influenced by acute exercise. The objective of this study was to evaluate whether acute exercise could accentuate RIF. A two-arm, parallel-group randomized controlled intervention was employed. Participants (N = 40) were randomized into one of two groups, including an experimental group (15-min of moderate-intensity exercise) and a control group (time-matched seated task). Retrieval-induced forgetting (RIF) and retrieval practice (RP) were assessed from a category-exemplar memory task. There was no significant main effect for RIF and no group by RIF interaction, suggesting that acute exercise did not alter RIF more than the control group. There was a significant main effect for RP, but there was no group by RP interaction. These RP findings align with the RIF findings, indicating that acute exercise did not alter RP more so than the control group. In conclusion, our experimental results do not provide support for an association of acute exercise on retrieval-induced forgetting or retrieval practice.
Keywords: executive control; memory interference; physical activity; working memory executive control; memory interference; physical activity; working memory

Among young adults, emerging experimental work has started to examine the effects of exercise on memory function. This accumulating body of work provides suggestive evidence that acute exercise may enhance memory function [1,2,3,4]. We have previously detailed the dearth of research on this topic among this population [5]. The mechanisms through which exercise may influence memory function has also been extensively detailed by our group [6,7,8,9,10]. Such effects may include, for example, exercise-induced alterations in neuronal excitability, growth factor production, and modulation of key hormones (e.g., IGF-1).
Research demonstrates that retrieving a subset of items from memory can cause forgetting of other related items in memory [11]. This phenomenon is referred to as retrieval-induced forgetting (RIF). No research, however, has evaluated whether acute exercise can influence RIF. As recommended elsewhere [5], the purpose of this study was to evaluate whether acute exercise was associated with RIF, written herein as a brief report. We specifically positioned the exercise stimulus to occur shortly before the memory task, as emerging work demonstrates that this is the optimal time to exercise [3,12,13].
We hypothesized that acute exercise would accentuate RIF. This stems from emerging work showing that RIF is enhanced among individuals with superior working memory capacity, and thus, among those who exhibit greater inhibitory processes mediated by executive control [11]. It is conceivable that acute exercise may enhance RIF as research demonstrates that acute exercise is favorably associated with inhibitory and executive control processes [14,15,16]. Further, emerging work demonstrates that acute exercise may more favorably influence prefrontal cortex-dependent cognition as compared to hippocampal-dependent cognition [17]. In addition to this being a novel paradigm, this work has important implications, as forgetting may be viewed as an adaptive memory outcome to help prevent memory interference [18].

A two-arm, parallel-group randomized controlled intervention was employed. Participants were randomized into one of two groups, including an experimental group and a control group. The experimental group walked briskly for 15 min, while the control group engaged in a seated task. This study was approved by the ethics committee at the University of Mississippi (#18–119) and participants provided written voluntary consent prior to participation.

Each group included 20 participants (N = 40). Participants, on average, were 20 years, with the sample being predominately female (60.0% and 75.0% in the exercise and control groups, respectively). This was based from a power analysis indicating sample sizes ranging from 8–24 (d, 0.84–1.36; two-tailed α error probability, 0.05; 1-β error probability, 0.80; allocation ratio, 1) [11,19]. Recruitment occurred via a convenience-based, non-probability sampling approach (classroom announcement and word-of-mouth). Participants included undergraduate and graduate students between the ages of 18 and 35 yrs.
Similar to other studies [20,21], participants were excluded if they:

The exercise bout involved exercising on a treadmill for 15 min. This specific exercise duration (15 min) was chosen as our previous work demonstrates a memory-enhancement effect from this duration [3,12,30,31,32]. Participants walked at approximately 70% of their estimated heart rate max (220-age), which corresponded with moderate-intensity exercise [33].
Immediately after the bout of exercise, participants rested in a seated position for 5 min. During this resting period, they played an on-line game of Sudoku (described below) to prevent boredom. After this resting period, they commenced the memory assessment, as described below.

Similar to other studies [34], those randomized to the active control group completed a medium-level, on-line administered, Sudoku puzzle for 20 min. The website for this puzzle is located here: https://www.websudoku.com/. This control task has been shown to not prime or enhance memory function [35].

Memory function was assessed from three sequential phases, including a study phase, retrieval practice, and a final memory recall assessment. In the study phase, participants were exposed to 72-word pairs, in which they were asked to memorize the paired words. In the retrieval practice phase, participants were cued to retrieve half of the word pairs. Lastly, in the final recall assessment, participants cue-recalled the 72 pairs that occurred during the study phase. In total, this task took about 10-minutes to complete. Details are described as follows.
Seventy-two category-exemplar pairs from previous research was used [11]. The pairs consisted of six exemplars from 12 categories, with half of the exemplars from each category being high-frequency exemplars, and the other half being low-frequency exemplars.
Participants viewed these 72 pairs, one at a time, in a blocked-randomized order, for 3 s each. Afterward, participants were cued to retrieve the low-frequency exemplars from half of the categories. They had up to 10 s to complete their response to each of the category-plus-two-letter-stem retrieval cues. Participants were told that the answers would come from the earlier study phase. Two rounds of this retrieval practice occurred.
After the retrieval practice, participants engaged in the final recall task. This involved the recall of all 72 pairs that occurred during the study phase. Category-plus-one-letter-stem cues were presented in a block-randomized order for all 36 high-frequency exemplars, with 18 exemplars associated with the practiced categories (Rp-) and 18 exemplars associated with the non-practiced categories (Nrp-). The 36 low-frequency items, including 18 from practiced categories (Rp+) and 18 from non-practiced categories (Nrp+) were tested subsequently. Retrieval Induced Forgetting (RIF) occurs if Rp- items are recalled less than Nrp- items. Retrieval Practice (RP) occurs if Rp+ items are recalled more than Nrp+.

As a measure of habitual physical activity behavior, participants completed the Physical Activity Vital Signs Questionnaire, which reported time spent per week in moderate-to-vigorous physical activity (MVPA) [36]. Height/weight (BMI) was measured to provide anthropometric characteristics of the sample. Furthermore, before, during and after the exercise and control conditions, heart rate (chest-strapped Polar monitor, F1 model) was assessed.

Individuals with greater working memory capacity and executive control processes have greater retrieval-induced forgetting (RIF). Similarly, those with impaired executive control have less RIF [37]. Based on this, coupled with evidence that exercise may enhance executive control [14,15,16], we explored whether acute exercise could facilitate RIF. Although our RIF findings were not statistically significant (e.g., Rp-, 0.41; Nrp-, 0.46), which was likely to be a result of our relatively small sample, they were within the same ballpark as other studies (e.g., Rp-, 0.41; Nrp-, 0.48) [11]. Future work, for example, should consider increasing the number of times the material is presented in the retrieval practice session, which may help to facilitate a RIF effect. Similarly, our statistically significant RP results (Rp+, 0.48; Nrp+, 0.22) aligned with other experiments (e.g., Rp+, 0.59; Nrp+, 0.33) [11]. However, of interest to this experiment was that we did not observe a differential RIF and RP between the exercise and control conditions.
Potential explanations for our non-differential findings across the exercise and control groups are as follows; given our relatively small sample size, it is possible that we had reduced statistical power to observe significant differences between the groups. As such, future work on this topic should employ a larger sample size. With between-subject designs, often the greatest source of variance comes from individual differences [31,38]. Thus, future experimental work on this topic should consider re-evaluating this paradigm while employing a within-subject design. That is, in this type of within-subject design, a baseline (control) assessment of RIF can be determined, which will allow for a better evaluation of the potential extent to which acute exercise may influence RIF. Furthermore, perhaps our imposed exercise intensity was too low to observe enhancements of executive control processes that are thought to mediate RIF. However, recent work suggests that a high exercise intensity can impair, not enhance, working memory and executive control processes [39]. Future work would benefit by evaluating multiple intensities of exercise on RIF and also concurrently measure executive control processes. It would also be of interest to evaluate open (e.g., badminton) versus closed (walking) skilled exercises on RIF, as recent work suggests that the type of exercise (open vs. closed) may have a unique effect on markers of synaptic plasticity as well as on behavioral measures of executive control [15]. Additionally, recent work suggests that chronic exercise, when compared to acute exercise, may have a greater effect on executive control [40]. Consequently, it would be useful for future work on this paradigm to examine the effects of acute and chronic exercise on RIF.
In conclusion, this novel experiment evaluated whether acute moderate-intensity exercise was associated with RIF. We did not observe evidence of a statistically significant association between moderate-intensity acute exercise on RIF. Future work evaluating this novel paradigm is warranted. Such work should consider increasing the sample size, employing a within-subject design, and evaluating multiple exercise intensities.

Author J.C. collected the data and provided feedback on the manuscript. Author P.L. conceptualized the study, computed the analyses, and prepared the initial draft of the manuscript. 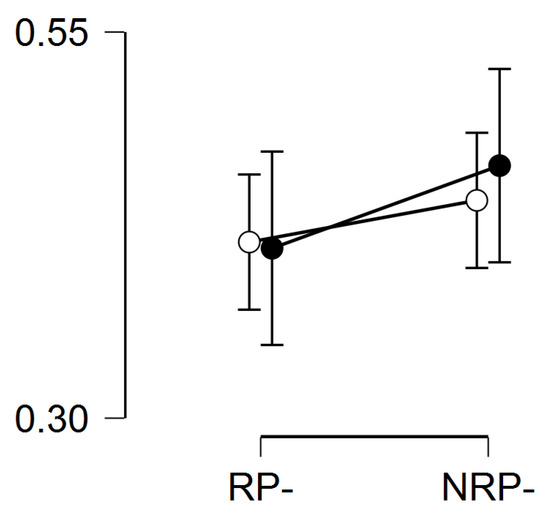 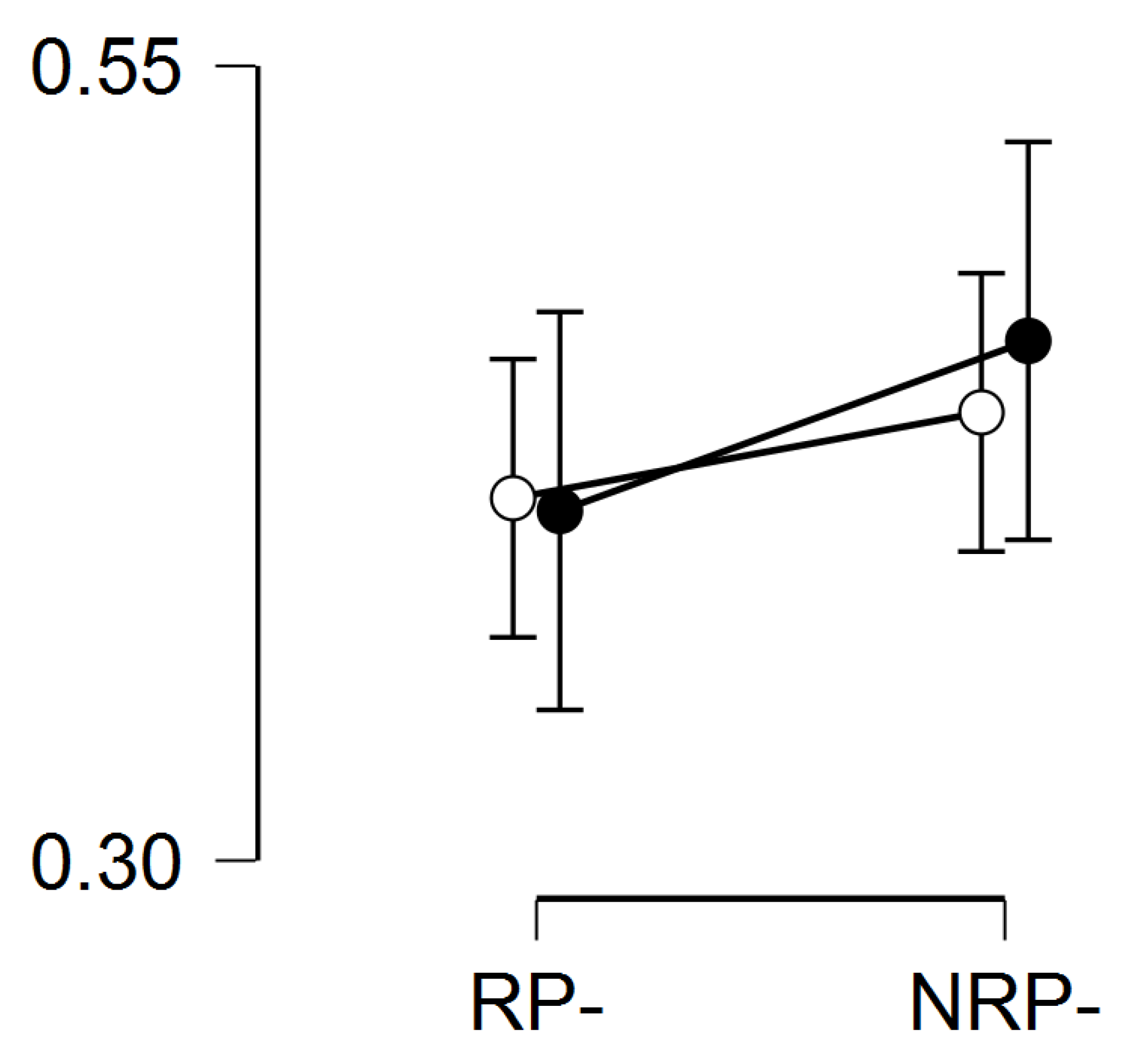 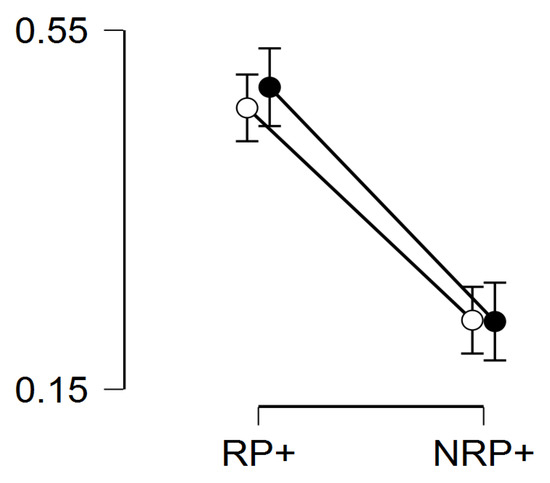 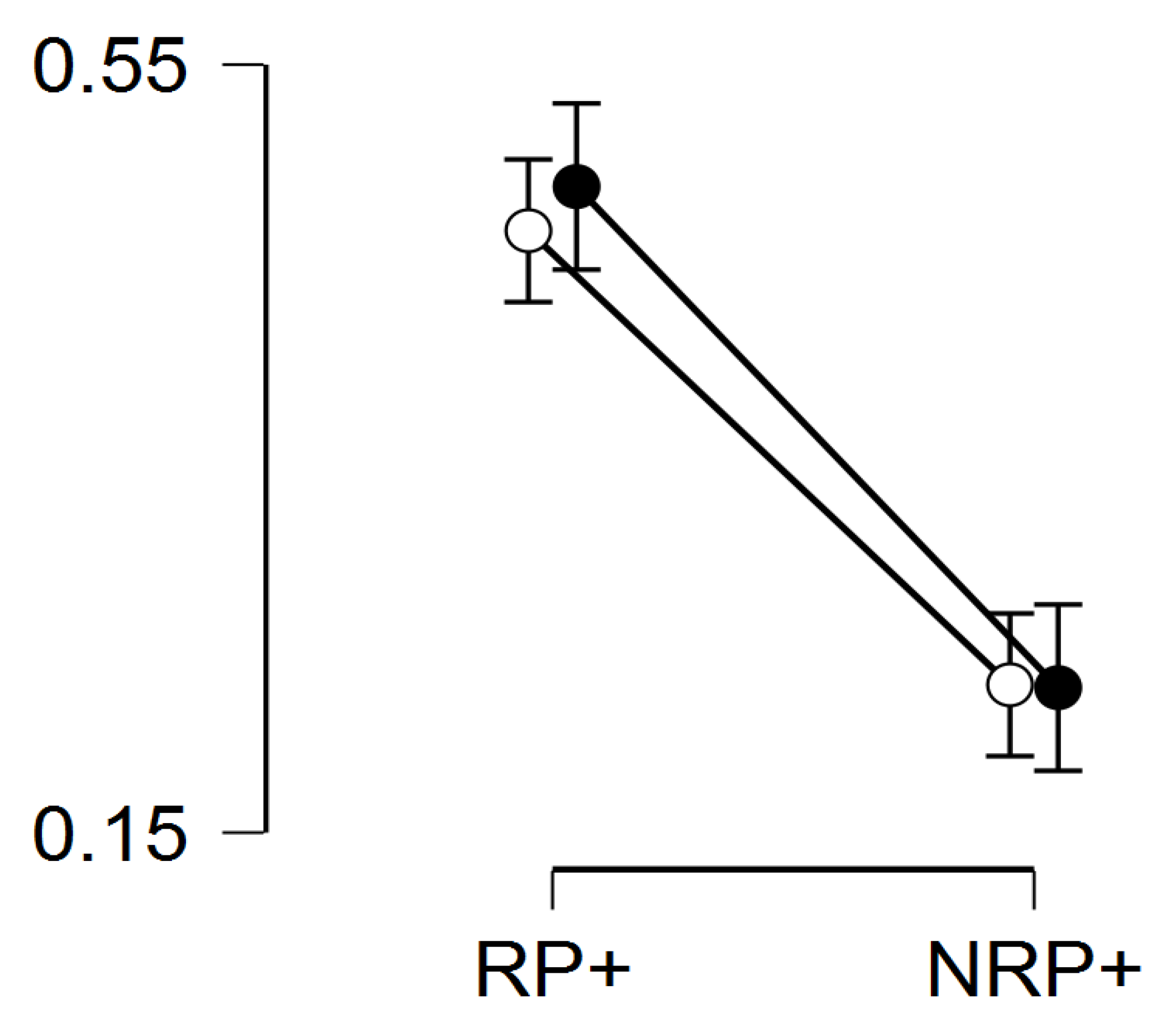