Exposure to High-Frequency Sound and Ultrasound in Public Places: Examples from Zurich, Switzerland
Next Article in Special Issue

The Use of Soundscapes to Monitor Fish Communities: Meaningful Graphical Representations Differ with Acoustic Environment
Previous Article in Journal

Benjamin A. Cray
* and

This paper compares two different approaches to deriving shading coefficients (weights) for optimal first order and second order directional sensors (that is; sonobuoys, vectors and dyadic sensors). The first approach is an analytical or a physics-based derivation, involving computations with gradients and linearized momentum; the second is an adaptive minimum variance distortionless response (MVDR) derivation, which finds weights that minimize the cross spectral density (CSD) matrix. The two approaches are shown to be equivalent. In other words, the adaptive MVDR processing procedure does indeed converge to a physics-based solution, without any pre-existing physical knowledge of the behavior of the acoustic field. This suggests that adaptive algorithms innately seek physics-based solutions when these solutions are optimum. The intent of this short communication is not to advocate for one type of adaptive processing method over another. The observation that is presented here is important though, it confirms that at least in an idealized noise field, adaptive processing converges on an optimal set of shading coefficients, similarly derived based on well-established physical acoustics. View Full-Text
Keywords: adaptive beamforming; acoustic vector sensors; directivity index; array shading coefficients adaptive beamforming; acoustic vector sensors; directivity index; array shading coefficients
►▼ Show Figures 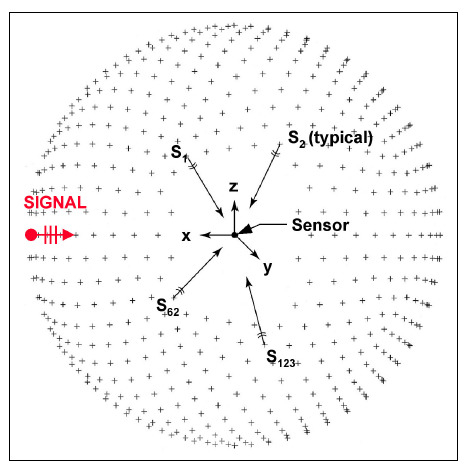