The Use of Soundscapes to Monitor Fish Communities: Meaningful Graphical Representations Differ with Acoustic Environment

Many marine animals produce sounds in several phases of their life cycles, either actively or as a byproduct of their activities, such as during mate attraction or when moving. Recent studies of underwater soundscapes have proved passive acoustic monitoring to be a cost-effective, non-invasive tool to understand ecological processes, especially when sampling in adverse conditions or at great depth. Four days of sound recordings at three seamounts from the Azorean archipelago were examined to assess the suitability of different sound graphical representations to characterize different acoustic environments that contrast in the contribution of vocal fish communities. Long-term spectrograms, sound pressure level, spectral probability densities and the Acoustic Complexity Index (ACI) were computed for two shallow seamounts (Formigas and Princesa Alice, c. 35 m) and one deep seamount (Condor, 190 m) using graphics with different time spans. Only in Formigas, which presented the highest occurrence of fish sounds, was it possible to observe temporal patterns of fish vocal activity in the graphical representations. We highlight that habitats with a higher diversity and abundance of sounds are the most suitable targets for these methods, while in locations with a low prevalence of fish sounds a combination of several methods would be recommended. View Full-Text
Keywords: acoustic ecology; passive acoustic monitoring; soundscapes; fish sounds; Northeast Atlantic; Azores acoustic ecology; passive acoustic monitoring; soundscapes; fish sounds; Northeast Atlantic; Azores
►▼ Show Figures 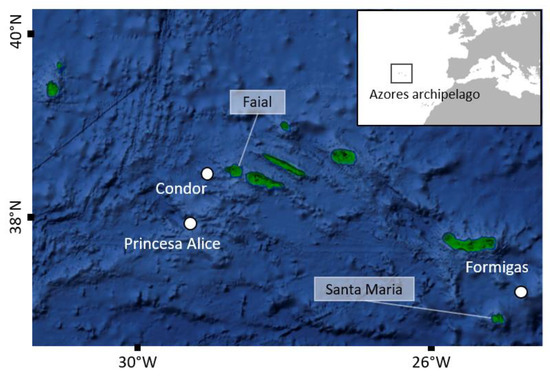