Stone Architectural Decoration in Burji Era: The Northern Mausoleum in the Khanqah of Al-Nasir Faraj Ibn Barquq (Cairo). Contribution to the Knowledge and Conservation Assessment
Previous Article in Journal

Co-Design of a Playful Mixed Reality Installation: An Interactive Crane in the Museum of Marble Crafts
Previous Article in Special Issue

The PietraAlberese is a marly limestone belonging to the Ligurian series (Monte Morello Formation of Eocene age). It is a material rarely mentioned in the historical Florentine architecture because the Pietraforte, the stone of the Medieval Florence and the Pietra Serena, the stone of the Renaissance, were the main lithotypes commonly used in those periods. Nevertheless, the Pietra Alberese has been widely utilized to build the town, because it is the only limestone cropping out in this part of Tuscany allowing the production of lime. In Prato and Pistoia, the Pietra Alberese was also used as stone (e.g., ashlars) in the structures and façades of many public and religious buildings. In this work, the geological setting and a mineralogical, petrographic and physical characterization of Pietra Alberese used as building stone are proposed together with a discussion about its durability. Moreover, the different compositional and macroscopic characteristics of two lithotypes (namely the sasso alberese and sasso porcino) utilized to produce the two types of lime used in the local traditional architecture (calcina dolce and calcina forte) are highlighted. View Full-Text
Keywords: Pietra Alberese; Tuscany; marly limestone; lime; vernacular building material; conservation Pietra Alberese; Tuscany; marly limestone; lime; vernacular building material; conservation
►▼ Show Figures 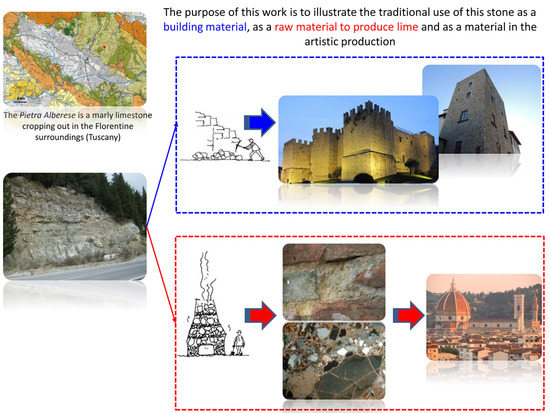