“Still covered in sand.looked very old.”—Legal Obligations in the Internet Market for Antiquities

Exploring the “Cozy Cabal of Academics, Dealers and Collectors” through the Schøyen Collection

In the wake of the trade in ancient materials, several ethical and political issues arise that merit concern: the decimation of the cultural heritage of war-torn countries, proliferation of corruption, ideological connotations of orientalism, financial support of terrorism, and participation in networks involved in money laundering, weapon sales, human trafficking and drugs. Moreover, trafficking and trading also have a harmful effect on the fabric of academia itself. This study uses open sources to track the history of the private Schøyen Collection, and the researchers and public institutions that have worked with and supported the collector. Focussing on the public debates that evolved around the Buddhist manuscripts and other looted or illicitly obtained material from Afghanistan, Pakistan and Iraq, this article unravels strategies to whitewash Schøyen’s and his research groups’ activities. Numerous elements are familiar from the field of antiquities trafficking research and as such adds to the growing body of knowledge about illicit trade and collecting. A noteworthy element in the Schøyen case is Martin Schøyen and his partners’ appeal to digital dissemination to divorce collections from their problematic provenance and history and thus circumvent contemporary ethical standards. Like paper publications, digital presentations contribute to the marketing and price formation of illicit objects. The Norwegian state’s potential purchase of the entire Schøyen collection was promoted with the aid of digital dissemination of the collection hosted by public institutions. In the wake of the Schøyen case, it is evident that in spite of formal regulations to thwart antiquities trafficking, the continuation of the trade rests on the attitudes and practice of scholars and institutions. View Full-Text
Keywords: antiquities trafficking; ancient manuscripts; Afghanistan; Norway; research ethics; provenance; Schøyen collection antiquities trafficking; ancient manuscripts; Afghanistan; Norway; research ethics; provenance; Schøyen collection
►▼ Show Figures 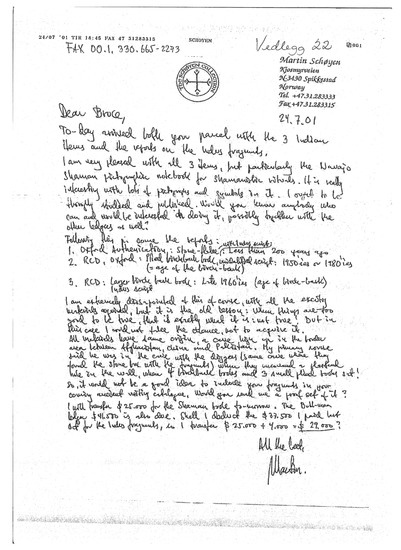