Multi-material jetting (CerAM MMJ, previously T3DP) enables the additive manufacturing of ceramics, metals, glass and hardmetals, demonstrating comparatively high solid contents of the processed materials. The material is applied drop by drop onto a substrate. The droplets can be adapted to the component to be produced by a large degree of freedom in parameterization. Thus, large volumes can be processed quickly and fine structures can be displayed in detail, based on the droplet size. Data-driven methods are applied to build process knowledge and to contribute to the optimization of CerAM MMJ manufacturing processes. As a basis for the computational exploitation of mass sensor data from the technological process chain for manufacturing a component with CerAM MMJ, a data management plan was developed with the help of an engineering workflow. Focusing on the process step of green part production, droplet structures as intermediate products of 3D generation were described by means of droplet height, droplet circularity, the number of ambient satellite particles, as well as the associated standard deviations. First of all, the weighting of the factors influencing the droplet geometry was determined by means of single factor preliminary tests, in order to be able to reduce the number of factors to be considered in the detailed test series. The identification of key influences (falling time, needle lift, rising time, air supply pressure) permitted an optimization of the droplet geometry according to the introduced target characteristics by means of a design of experiments.
Keywords: data management; additive manufacturing; ceramics; multi-material jetting; design of experiments data management; additive manufacturing; ceramics; multi-material jetting; design of experiments

The process chain of CerAM MMJ can be categorized into the three sequential process steps of feedstock production, green part production and thermal post-treatment, further structured into debinding and sintering (see Figure 1). This can be followed by the ablative finishing of functional surfaces resulting in the final component. The semi-finished products of the individual process stages must fulfil the defined target properties that form interfaces between individual process steps. As final component characteristics occur during thermal post-treatment, the process stage of green part production is not initially assigned the direct target characteristics included in process monitoring, which makes it important to identify the cause-and-effect relationships to this process step in experimental investigations. In order to determine the interaction between the processing steps, intermediate results in the form of parameters (shape, dimension, possibly locally resolved into thick or thin walls, radii of curvature, etc.) must exist on the green part, which allow conclusions to be drawn about correlations or shrinkage.
The system for CerAM MMJ (see Figure 2a) consists of a positioning device (1), a micro-dispensing unit (2) and the platform (3), with a prototype control system driving these components. Orthogonal linear drives (ISEL Automation KG) enable the positioning of the dosing system along cartesian coordinates with a maximum travel speed of 22.5 mm·s−1. The build plate (3), which can be heated up to 100 °C by an integrated heating bed, permits a maximum build size of 280 × 210 mm. The maximum total build space is described through a maximum z-coordinate travel of 120 mm. A micro-dispensing system (Vermes Microdispensing GmbH) consisting of micro-dispensing valve, cartridge heater, nozzle heater and controls (4) is used for the controlled deposition of the thermoplastic feedstock. In the dispensing unit, a piezo actuator, connected by a lever, realizes the tappet stroke of the micro-dosing valve. The interaction of the components permits the dosing of high to ultra-high viscosity media with a maximum viscosity of 2000 Pa·s. The heatable micro-dispensing system enables the selective and parameterizable deposition of the feedstock in droplets, constituting the basis for the generation of further component geometries via the preliminary features like lines and surface patterns. The material used for the described experiments in thermoplastic 3D printing is silicon nitride Si3N4.
The dosing process constitutes a cycle consisting of four phases defined by five parameters (see Figure 2b). At the beginning of the dosing cycle, the tappet of the dosing unit is in a closed state. The parameter rising time (RT) defines the time in which the tappet switches to the open state. This causes a depression in the nozzle chamber, resulting in feedstock flowing into the chamber. The period in which the tappet remains in open state is defined by the open time (OT), in which the dosing medium is given time to fill the nozzle compression space in a defined manner. The switch back to the closed state of the dosing unit is described by the falling time (FT). The delay time (DT) describes the time lag until the dosing starts again. The needle lift represents the percentage stroke of the dosing tappet and thus the maximum dosing volume. Since the parameters RT and FT specify the time required for this, a correlation between these variables and the needle lift with the tappet speed is given. In addition to the variables describing the dosing cycle, other relevant dosing parameters define the environmental conditions of the dosing process, including cartridge temperature, nozzle temperature and air supply pressure.
The Figure 2c illustrates the key geometric output variables used for evaluation in this study: the droplet dimension in the feed direction, the drop diameter aligned (DDA), the droplet dimension perpendicular to the feed (DDP), and the droplet height (DHE). The basis for the generation of components by the CerAM MMJ are the feedstock droplets deposited by the MDS as the smallest volume elements. The transition from line structures to area structures results from the overlapping of the lines in the y-coordinate yp. The repetitive generation of spatial structures eventually facilitates the generation of complex component 3D geometries. A non-contact laser profile scanner LJ-V7020 (Keyence) was used for the surface measurement of the generated structures. Based on two-dimensional height profilometer data from the laser scanner, through the linear movement of the profilometer across the specimen, the derivation of three-dimensional height profiles was compiled for test evaluation. All the measurements for the proposed optimization approach were recorded with the described laser scanner profilometer and processed with software according to the procedure described in the following section.

A holistic approach to process data management was applied to assist an analysis of multi-material jetting (CerAM MMJ), whereby the quality descriptive target characteristics and suitable measuring equipment for recording them were assigned to the steps of the manufacturing process. Based on the technological process chain for the AM of a component by CerAM MMJ and an engineering workflow reflecting the steps to be processed, a data management plan could be developed as a framework for a computational evaluation of mass sensor data. Focusing on the process step of a green part production, droplet structures as intermediate products of 3D generation were described geometrically (droplet height, droplet circularity, the number of ambient satellite particles, and the associated standard deviations). This served the purpose of preparing the data for a design of experiments for the multifactorial detection of different interdependent influences on the geometric characteristics of the deposition results. Single-factorial preliminary tests were used to determine a weighting of the influencing factors in advance and to enable a reduction of the factors to be considered in the statistical design of experiments. The identification of key influences (falling time, needle lift, rising time, air pressure) permitted an optimization of the droplet geometry according to the introduced target characteristics by the means of a multifactorial design of experiments. Taking into account the technological correlations during the droplet generation, individual output variables, e.g., the droplet height, can be adjusted in line or on demand, for example by changing the falling time. In order to approach the future goal of fully integrated automated process control, self-sufficient analysis methods, such as machine learning concepts, will have to be implemented with an extended scope of sensor technology.

This research was funded by the Saxon State Parliament grant number 100380248.

This work is financed from tax-money based on the budget passed by the members of the Saxon State Parliament within the high performance and transfer center Smart Production and Materials. 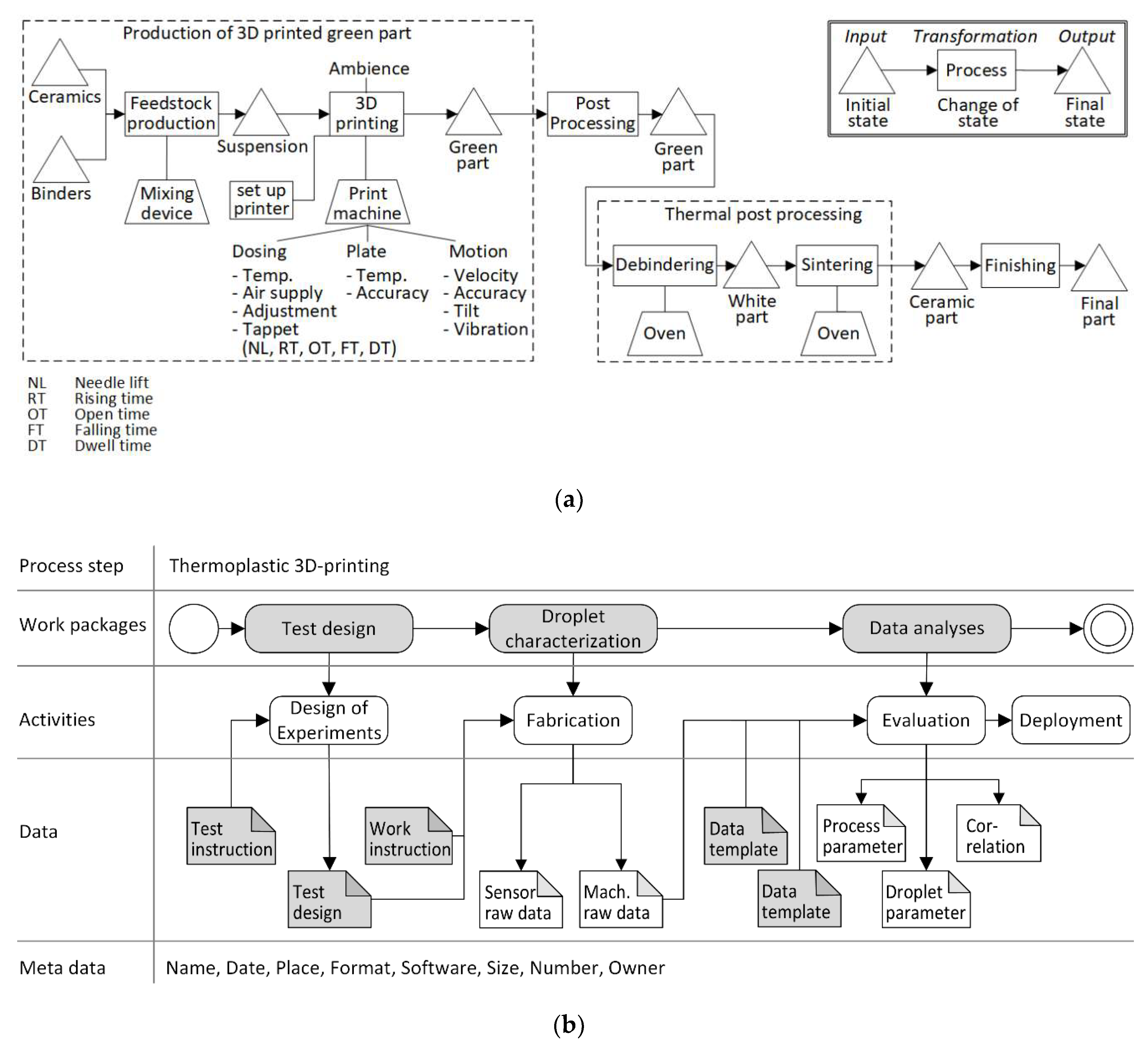 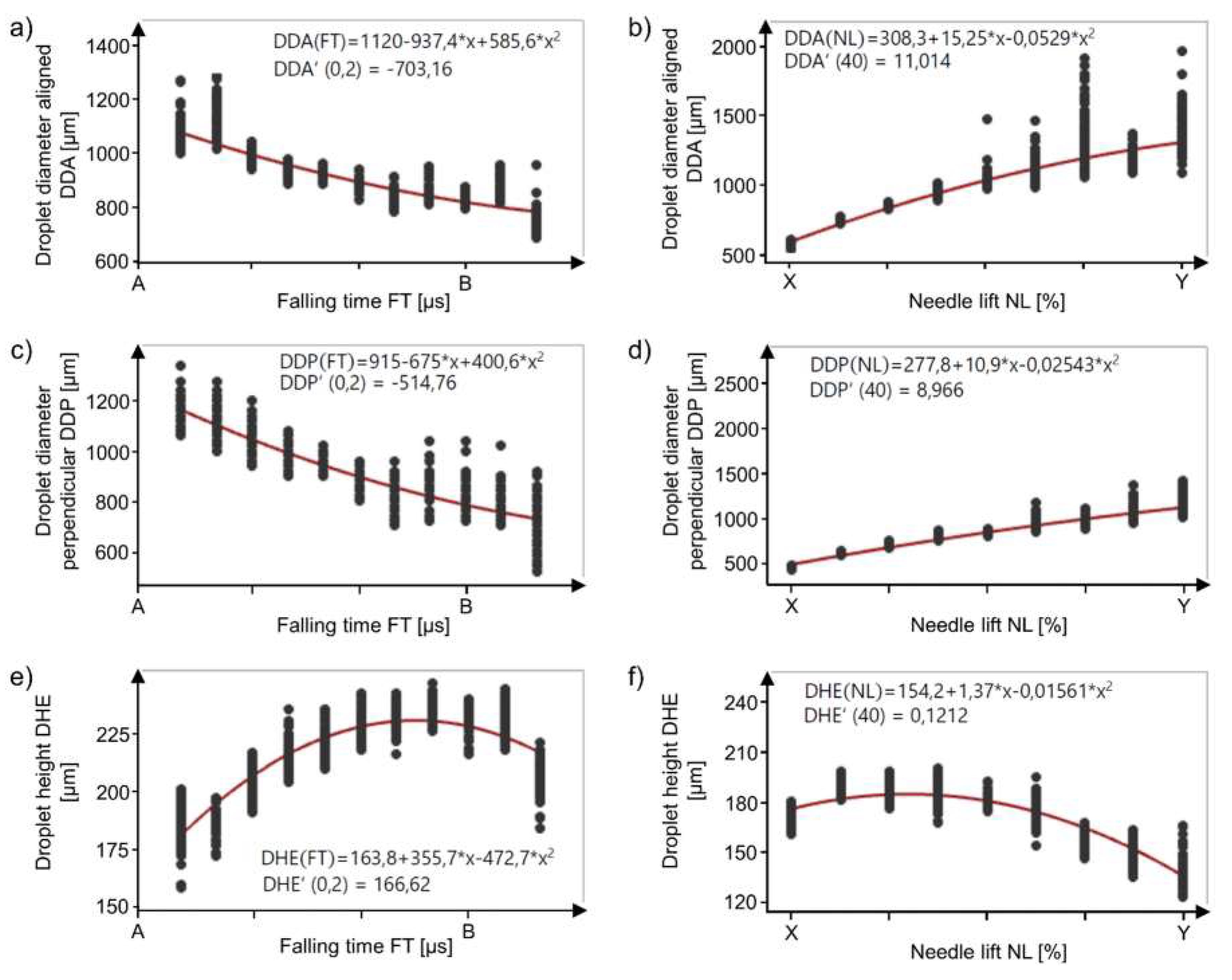 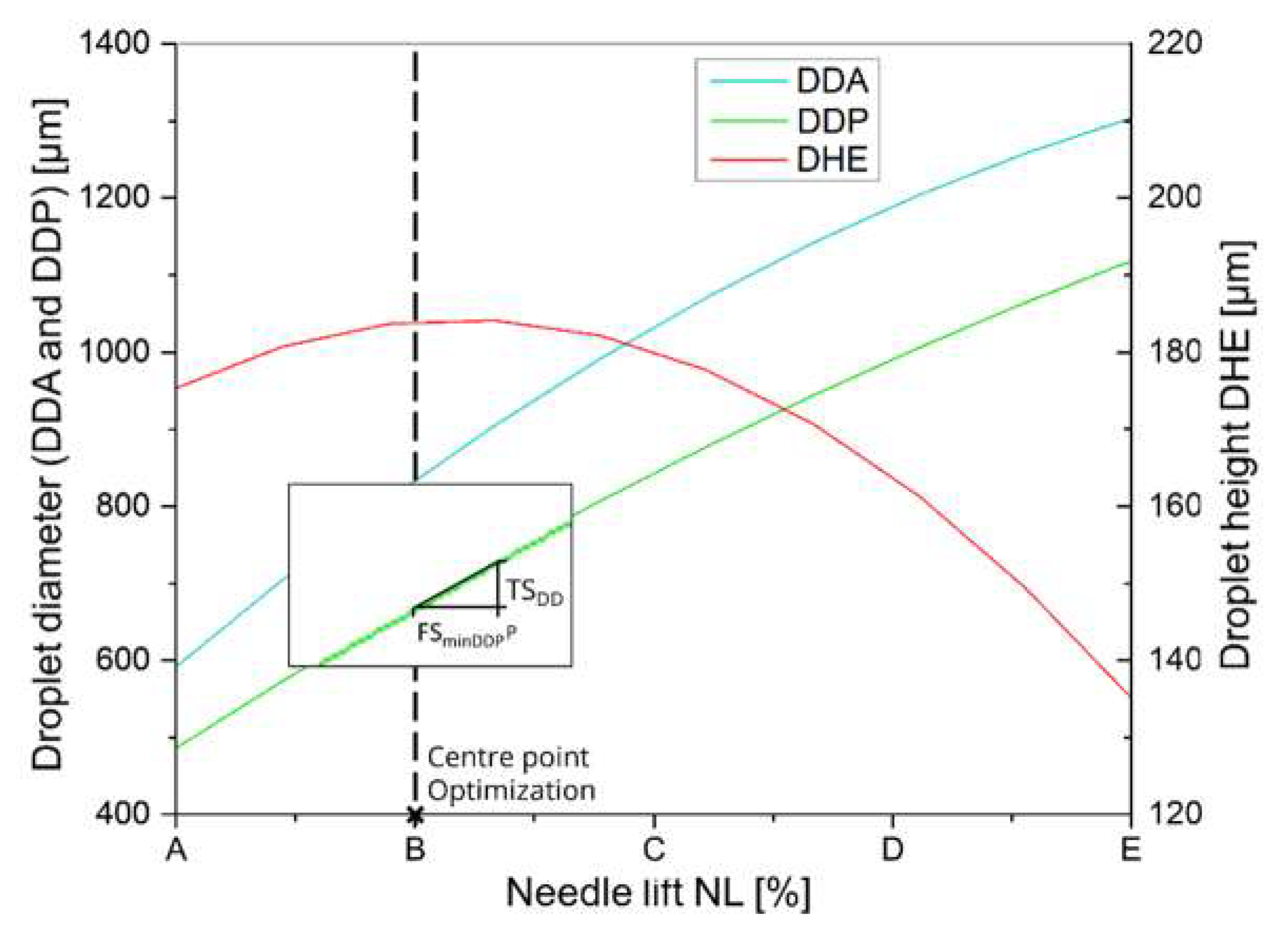 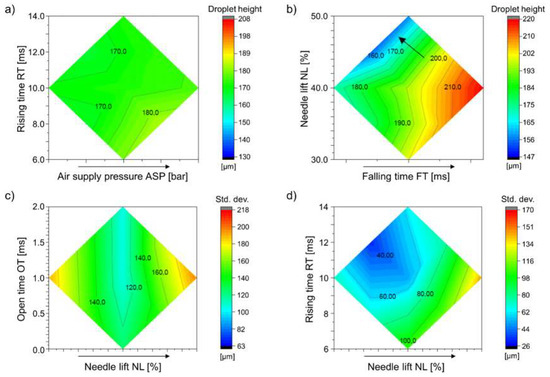