The dynamic modulus of hot mix asphalt (HMA) is a fundamental material property that defines the stress-strain relationship based on viscoelastic principles and is a function of HMA properties, loading rate, and temperature. Because of the large number of efficacious predictors (factors) and their nonlinear interrelationships, developing predictive models for dynamic modulus can be a challenging task. In this research, results obtained from a series of laboratory tests including mixture dynamic modulus, aggregate gradation, dynamic shear rheometer (on asphalt binder), and mixture volumetric are used to create a database. The created database is used to develop a model for estimating the dynamic modulus. First, the highly correlated predictor variables are detected, then Principal Component Analysis (PCA) is used to first reduce the problem dimensionality, then to produce a set of orthogonal pseudo-inputs from which two separate predictive models were developed using linear regression analysis and Artificial Neural Networks (ANN). These models are compared to existing predictive models using both statistical analysis and Receiver Operating Characteristic (ROC) Analysis. Empirically-based predictive models can behave differently outside of the convex hull of their input variables space, and it is very risky to use them outside of their input space, so this is not common practice of design engineers. To prevent extrapolation, an input hyper-space is added as a constraint to the model. To demonstrate an application of the proposed framework, it was used to solve design-based optimization problems, in two of which optimal and inverse design are presented and solved using a mean-variance mapping optimization algorithm. The design parameters satisfy the current design specifications of asphalt pavement and can be used as a first step in solving real-life design problems. View Full-Text
Keywords: hot mix asphalt dynamic modulus; principal component analysis; linear regression modeling; artificial neural network; receiver operating characteristic; optimization hot mix asphalt dynamic modulus; principal component analysis; linear regression modeling; artificial neural network; receiver operating characteristic; optimization
►▼ Show Figures 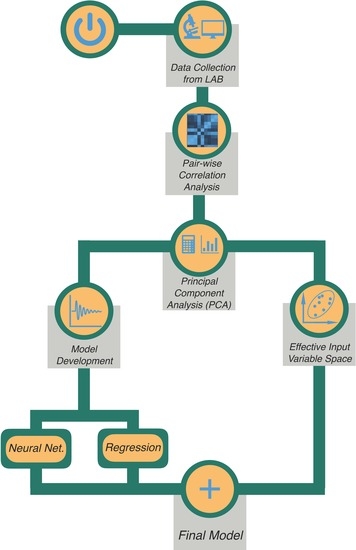