Frequent terrorist activities, the use of vehicle bomb blasts and improvised explosive devices (IEDs) have brought forth the task of protection against blasts as a priority issue for engineers. Terrorists mostly target the areas where human and economic losses are significantly higher. It is really challenging to study the effects of blast loading on structures due to numerous variables. For instance, the type of detonation charge, explosive material, placement of charge and standoff distance, etc., are a few of the variables which make the system more complicated. Reinforced cement concrete (RCC) wall panels are commonly used for protecting important installations and buildings. In this research, the response of RCC wall panels has been investigated due to the blast effect caused by two TNT charge weights of 50 kg and 100 kg. These two charge weights have been selected after a detailed study of terrorist activities in the recent past. For this purpose, an existing arrangement at an important military installation, i.e., NESCOM Hospital Islamabad in Pakistan, has been selected. To reduce computational efforts, three RCC wall panels, placed side by side producing a continuous front along with a corresponding boundary and structural wall, have been considered. RCC wall panels are placed at a distance of 3 ft from the perimeter of the boundary wall and 23 ft from the structural wall. The displacement on the front face of RCC wall panels and the structural wall is measured at three levels of top, middle and bottom. ANSYS AUTODYN software has been used to simulate the model. Analysis has been carried out to identify and study the weakness of existing arrangements. Literature was reviewed for suggesting an appropriate strengthening technique for existing structures against blast loading. It was found that in addition to existing strengthening techniques, use of steel strips is amongst the most feasible technique for strengthening existing structures. It not only significantly enhanced the blast performance of structures, but it also significantly reduced z-direction displacements and pressures. The results show that the use of steel strips as the improvement technique for already placed RCC wall panels can be effective against a blast loading of up to 100 kg TNT. View Full-Text
Keywords: blast loading; TNT explosion; RCC wall panels; strengthening technique blast loading; TNT explosion; RCC wall panels; strengthening technique
►▼ Show Figures 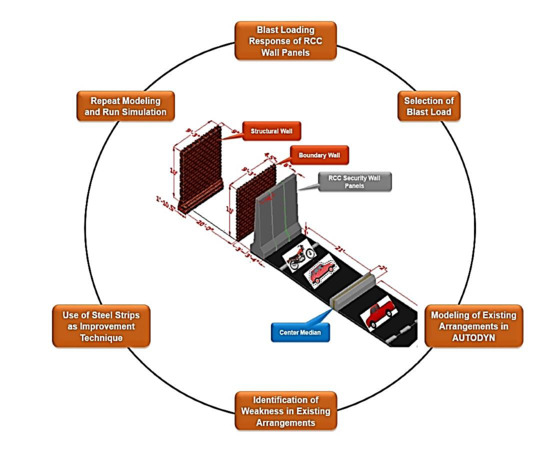