Physical activity (PA) during preschool years is critical to a child’s development and overall health and well-being [1,2]; therefore, it is important to integrate PA into early childhood [3,4]. In 2016, over 41 million children worldwide under the age of 5 years were estimated to be overweight [5]. Childhood obesity is an increasing public health concern [6] and weight gained by the age of 5 years has been reported as a predictor of being overweight in adulthood [7]. Physical activity levels and sedentary behaviours of children in the UK have been viewed as ‘obesogenic’ [8,9], with habitual PA declining over recent years and sedentary behaviour being the dominant state of children’s PA levels during their preschool day [4,10,11,12]. Although studies have examined PA in children aged 5 years and above, fewer studies have been conducted with preschool children. This limited evidence base in UK preschool children’s PA levels is therefore a cause for concern.
It has been recommended that preschool children in the UK should ideally be participating in at least 180 min of PA per day [13,14,15]. Studies have discovered that preschool children spend the majority of their day in sedentary behaviours and a low proportion of their day in moderate to vigorous PA (MVPA) (<15%) [10,16,17]. Of children aged between 2 and 4 years in England, only about one in 10 meet the recommendations of at least 180 min of PA per day [18,19]. It has been reported that children engaged in 7.7 min of MVPA per hour at preschool [20]. Therefore, in accordance with Pate et al. [20], if a child, for example, attends preschool for 8 h, they would only engage in ~1 h of MVPA and it is unlikely they would participate in a further 2 h of PA outside of preschool. However, no study has systematically checked to see whether there is a difference in physical activity between weekdays, when the child attends preschool, and weekend days, when the child is influenced more by their home environment. O’Dwyer et al. [21] reported that there were discrete periods during the after-preschool hours and at the weekend when PA levels were low, yet children who attended preschool for full days engaged in 11.1 min MVPA less than those attending for half days, suggesting that the preschool environment is related to decreased PA. That said, studies have shown that PA in preschoolers differs over the course of the day and the week in countries such as Sweden, England and Denmark [21,22,23,24], with some studies reporting that preschool children are more often physically active on weekend days than on weekdays in Australia and England, for example [21,25], while others found that preschool children undertook more total PA and MVPA during preschool hours in Sweden, Denmark, England and Finland [22,24,26,27]. Therefore, additional research is required to identify any potential differences in PA between weekdays and weekend days in preschool children.
The accurate measurement of PA is fundamental in evaluating the effectiveness of interventions and understanding relationships between PA and health [28]. Measuring habitual PA accurately is beneficial when observing the frequency and distribution of PA in preschool children and identifying the amount of PA that could influence their health. The objective monitoring of PA is important and accelerometers have become a reliable and valid way of estimating children’s PA [29,30], whilst also showing promise in monitoring preschool children’s PA. Accelerometers are an appropriate objective measure in terms of validity, reliability and practicality as a method for the measurement of intensity, duration and frequency of movement for sedentary behaviour and habitual PA in 3–5 year olds [1,31,32,33]. Accelerometers can be set at different sampling intervals, with some studies being set at one-minute intervals [1,34]. However, one-minute sampling intervals may mask the short intermittent bursts of activity that are representative of young children and therefore shorter sampling intervals have been recommended [20,35]. As very few studies have used objective monitoring of PA via accelerometery in preschool children, then further research is required to examine the intensity of PA that these children participate in on weekdays in preschool and at the weekend.
This is the first study to compare PA levels between week and weekend days, using objective measurements in the form of the newly calibrated GENEActiv accelerometer cut-points for preschool children in the UK. This study aims to determine whether the intensity and duration of PA varies between weekdays and weekend days.

Participants in this study were preschool aged children from 11 preschools in North Warwickshire, England. This study was completed in the Nuneaton and Bedworth Borough, which is in the top 10% of the most deprived Super Output Area’s in England on the Index of Multiple Deprivation (IMD) and is ranked as the 111th most deprived Local Authority District out of 326 in England [36]. Ethics approval (P45654) was granted by the Faculty of Health and Life Sciences Ethics Committee, Coventry University and parental consent was obtained. The participants were a convenience sample and included 185 preschool children (99 boys, 86 girls), aged 3–4 years, from a deprived area.

Height was measured to the nearest mm, in bare or sock feet, using a standard portable stadiometer (Leicester height measure, Leicester, UK). Body mass was measured to the nearest 0.1 kg using portable weighing scales (Tanita scales, Tokyo, Japan); the children were lightly dressed (t-shirt and light trousers/skirt) and barefoot or in socks. The measurements were repeated twice and the average score was recorded. Body mass index (BMI) was calculated as kg/m2 and weight status was categorised as overweight/obese or normal weight using standardised international cut-points [37].

Daily total PA was measured using a GENEActiv waveform triaxial accelerometer (ActivInsights Ltd., Kimbolton, UK). The accelerometer measured at 10 epochs (s) and a sample frequency of 100 Hz, so as to enable an accurate assessment of the intermittent activities of preschool children [38,39,40]. The GENEA accelerometer was attached using a watch strap and positioned over the dorsal aspect of the right wrist, midway between the radial and ulnar styloid process. Accelerometers worn on the wrist are more convenient to wear and lead to greater compliance during prolonged wearing when assessing habitual activity [41]. The participants wore the accelerometers for four consecutive days; this included two weekdays in the setting and two weekend days. Each child was required to wear the accelerometer for a minimum of 6 h per day to be included in the study, although it was preferred that they wore them at all times. All children received a letter to take home describing how and when they should wear the GENEActiv accelerometers. Non-wear time was defined as 90-minute windows of consecutive zero or nonzero counts [42]. “Nonzero” counts are caused by artefactual accelerometer movements during non-wear periods—for example, accidental movement of the accelerometer, such as the device being nudged when on a bedside table [42]. The 90-minute window was chosen as this was found to better predict time spent in sedentary behaviours and PA levels [42]. This said, Esliger et al. [43] suggested that a period of 20 min of consecutive zero counts is appropriate for children, as motionless bouts of ≥20 min are biologically implausible. However, it was reported that this low threshold causes an unrealistically high number of non-wear periods [44]. Therefore, it was recommended to use 90 minute consecutive zero counts, as this prevents the overestimation of non-wear time and the underestimation of sedentary behaviours in overweight to obese children [42]. The amount of wear time and percentage (%) of wear time that each child spent in different intensities of PA was calculated for weekdays and weekend days. It is recommended that four days, including one weekend day, is appropriate for measuring habitual PA [45]. Given the logistics of ensuring that children aged 3 years of age wore the accelerometer for the whole monitoring period, participants were included in the final data analysis providing they had worn the accelerometer for 3 days (when in the setting and at the weekend) and for a minimum of six hours each day, similar to previous research [46,47,48]. Of the 185 sample, 178 children’s accelerometer data were recorded; data for seven children were not useable. This was due to the children either not wearing the GENEActiv accelerometers or technical difficulties with the accelerometers or recording of the data. The final sample included in the analysis was 178 children (95 boys, 83 girls), aged 3–4 years. Only four out of the 178 participants were full-time; the remainder were part-time nursery attendees.
For each of the epochs (number of seconds), movement data (activity counts) were added and logged; these were then processed and analysed. Accumulated activity counts were categorised in terms of intensity such as sedentary behaviour, light, moderate and vigorous PA [1]. Cut-points for sedentary behaviour, light PA and moderate and vigorous PA were used to determine the PA intensity of the preschool children. The cut-points used were determined specifically for children aged 4–5 years using GENEA accelerometers, albeit they were calibrated in a laboratory-based study; they are the most relevant cut-points for the preschool children’s age in this study (3–4 years) as they are the closest cut-points that are calibrated and reported in the literature [49]. The difference in age should have very little impact on the results, as they are as closely aligned in age as possible and 4 year olds/preschool children have been used for the calibration and ultimately are assessed in this study. The preschool children in the laboratory-based study that was used to determine cut-points for this current study completed six activities, which ranged from lying supine to running. They wore the GENEA accelerometers on both their left and right wrists and used a Cortex mask for gas analysis; VO2 data were used to assess criterion validity [49]. The cut-points determined were as follows: dominant hand <8.1 cpm for sedentary activity, 8.1–9.3 cpm for light activity and 9.3+ cpm for moderate and vigorous PA. For the non-dominant hand, the cut-points were <5.3 cpm for sedentary activity, 5.3–8.6 cpm for light activity and 8.6+ cpm for moderate and vigorous PA [49]. On the accelerometers, the ‘Epoch Converter’ creates epochs of 1, 5, 10, 15, 30 or 60 s; the means that for each parameter, the Sum Vector Magnitude is calculated for each epoch [50]. Children were classified as either meeting (sufficiently active) or not meeting (insufficiently active) the requirement of 180 min per day of PA for 0–5 year olds.

Descriptive characteristics, including mean time (min) spent in the different intensities of PA during the week and weekend days, are summarised in Table 1. Of the sample, none of the 178 children met the UK recommended 180 min or more of PA (light, moderate and vigorous intensity) per day. Two, circa 1%, of the children did meet the 180 mins on one of their days, but not on all days.
Preschool children respectively spent 91.9% and 1.8% of time in sedentary behaviour and light PA on weekdays, and 96.9% and 1.1% of time in sedentary behaviour and light PA at the weekend. During weekdays and weekend days, 6.3% and 2.0% of time was spent in moderate and vigorous PA, respectively. The percentage (%) of daily time spent in different intensities of PA during weekday and weekends for preschool children can be viewed in Figure 1.
There was a significant difference in the percentage of time (relative) spent in sedentary behaviour between week and weekend days (P < 0.05), yet no differences were found between week and weekend days for light or MVPA (Figure 1). There was a significantly smaller mean time in minutes spent in sedentary PA (mean difference = 91.874, P = 0.001) during weekdays compared to weekends. This pattern was reversed for moderate and vigorous PA (mean difference = 4.545, P = 0.001), with a larger mean time spent in vigorous PA during weekdays compared to weekend days. Wear time had no effect on PA, as there was no significant interaction between wear time and weekday (F = 1.308, P = 0.257) or between wear time and weekend day (F = 1.107, P = 0.297) for the significant difference reported for the percentage of time (relative) in sedentary behaviour. Sex had no significant effect on any PA intensity (all P > 0.05). 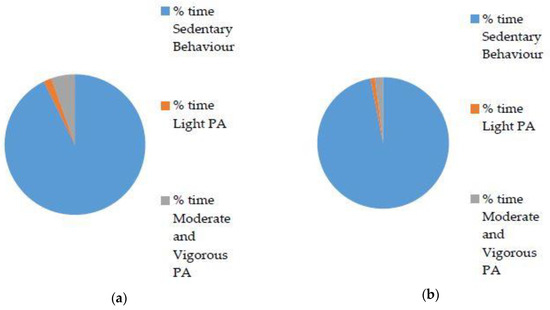