Utilising the ‘Getting to Outcomes®’ Framework in Community Engagement for Development and Implementation of Sickle Cell Disease Newborn Screening in Kaduna State, Nigeria

Glucose-6-phosphate dehydrogenase (G6PD) deficiency, an X-linked genetic disorder, is associated with increased risk of jaundice and kernicterus at birth. G6PD deficiency can manifest later in life as severe hemolysis, when the individual is exposed to oxidative agents that range from foods such as fava beans, to diseases such as typhoid, to medications such as dapsone, to the curative drugs for Plasmodium (P.) vivax malaria, primaquine and tafenoquine. While routine testing at birth for G6PD deficiency is recommended by the World Health Organization for populations with greater than 5% prevalence of G6PD deficiency and to inform P. vivax case management using primaquine, testing coverage is extremely low. Test coverage is low due to the need to prioritize newborn interventions and the complexity of currently available G6PD tests, especially those used to inform malaria case management. More affordable, accurate, point-of-care (POC) tests for G6PD deficiency are emerging that create an opportunity to extend testing to populations that do not have access to high throughput screening services. Some of these tests are quantitative, which provides an opportunity to address the gender disparity created by the currently available POC qualitative tests that misclassify females with intermediate G6PD activity as normal. In populations where the epidemiology for G6PD deficiency and P. vivax overlap, screening for G6PD deficiency at birth to inform care of the newborn can also be used to inform malaria case management over their lifetime. View Full-Text
Keywords: glucose-6-phosphate dehydrogenase; G6PD deficiency; point-of-care; diagnostics; malaria; Plasmodium vivax glucose-6-phosphate dehydrogenase; G6PD deficiency; point-of-care; diagnostics; malaria; Plasmodium vivax
►▼ Show Figures 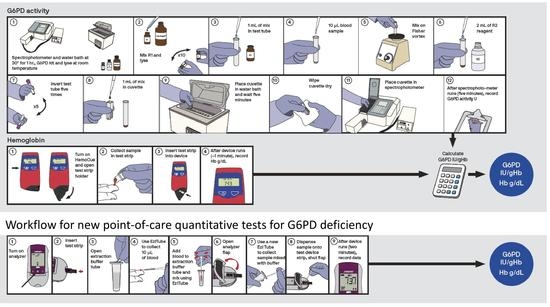