The biotransformation of hop aroma, particularly by the cysteine S-conjugate beta-lyase enzyme (CSL), has been a recent topic of tremendous interest among brewing scientists and within the brewing community. During a process often referred to as biotransformation, yeast-encoded enzymes convert flavorless precursor molecules found in barley and hops into volatile thiols that impart a variety of desirable flavors and aromas in beer. Two volatile thiols of particular interest are 3-mercaptohexan-1-ol (3MH) and its acetate ester, 3-mercaptohexyl acetate (3MHA), which impart guava and passionfruit flavors, respectively. In this study, a parental Saccharomyces cerevisiae brewing strain that displayed low thiol biotransformation activity was genetically manipulated (GM) to substantially increase its thiol biotransformation potential. Construction of this GM strain involved integration of a gene encoding a highly active CSL enzyme that converts thiol precursors into the volatile thiol, 3MH. Three additional strains were subsequently developed, each of which paired CSL expression with expression of an alcohol acyltransferase (AAT) gene. It was hypothesized that expression of an AAT in conjunction with CSL would increase production of 3MHA. Fermentation performance, sensory characteristics, and 3MH/3MHA production were evaluated for these four GM strains and their non-GM parent in 1.5hL fermentations using 100% barley malt wort hopped at low levels with Cascade hops. No significant deviations in fermentation performance (time to attenuation, final gravity, alcohol content, wort fermentability) or finished beer chemistry were observed between the GM strains and the parent strain with the exception of the speed of vicinal diketones reduction post-fermentation, which was quicker for the GM strains. The GM strains produced beer that had up to 73-fold and 8-fold higher 3MH and 3MHA concentrations than the parent strain, achieving concentrations that were up to 79-fold greater than their sensory detection thresholds. The beers were described as intensely tropical and fruity, and were associated with guava, passionfruit, mango, pineapple and sweaty aromas. These experiments demonstrate the potential of genetic modification to dramatically enhance yeast biotransformation ability without creating off flavors or affecting fermentation performance. View Full-Text
Keywords: thiols; 3-mercaptohexan-1-ol; 3MH; 3-mercaptohexyl acetate; 3MHA; hops; beer; brewing; genetic-modification thiols; 3-mercaptohexan-1-ol; 3MH; 3-mercaptohexyl acetate; 3MHA; hops; beer; brewing; genetic-modification
►▼ Show Figures 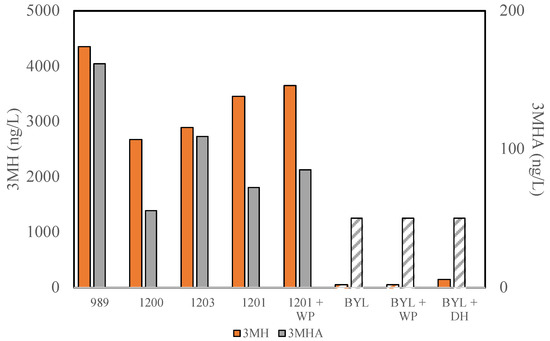