Marine actinomycetes are prolific microorganisms; however, knowledge of their diversity, distribution, and secondary metabolites is limited. Marine actinomycetes represent an untapped source of novel bioactive compounds. In this study, we investigated shrimp shell as substrates for model production bioactive metabolites from actinomycetes under solid state fermentation (SSF) conditions. A total of fifteen actinomycetes were isolated from six sponges and one tunicate. The isolated actinomycetes were grown on solid shrimp shells. Cultures of actinomycetes were extracted with ethyl acetate (EtOAc) and extracts were bioassayed for activity against Staphylococcus aureus. One isolate 18A13O1 from the sponge, Rhabdastrella globostellata, exhibited antibacterial activity on primary screening compared to the other samples and was chosen for further study. Visualization using SEM showed aerial and substrate mycelia. Through phylogenetic analysis, it was confirmed that isolate 18A13O1 is a Pseudonocardia carboxydivorans. Purification of an EtOAc extract yielded A13B2, which showed a minimum inhibition concentration against S. aureus at 15.6 μg/mL. It can be concluded that this basic information is very important for further studies related to the development of the production of bioactive secondary metabolites through the solid state fermentation process. View Full-Text
Keywords: actinomycetes; antibacteria; Staphylococcus aureus; solid state cultivation actinomycetes; antibacteria; Staphylococcus aureus; solid state cultivation
►▼ Show Figures 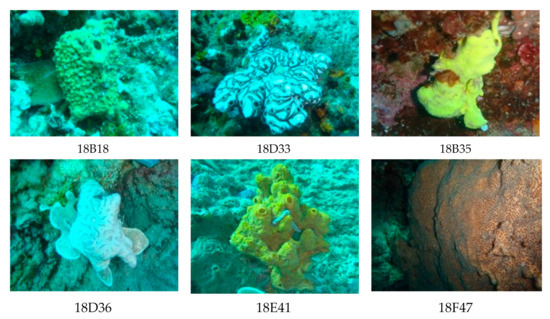