The Smell of Synthetic Biology: Engineering Strategies for Aroma Compound Production in Yeast
Next Article in Special Issue

Lachancea (kluyveromyces) thermotolerans is a ubiquitous yeast that can be naturally found in grapes but also in other habitats as soil, insects and plants, extensively distributed around the world. In a 3-day culture, it shows spherical to ellipsoidal morphology appearing in single, paired cells or short clusters. It is a teleomorph yeast with 1–4 spherical ascospores and it is characterized by a low production of volatile acidity that helps to control global acetic acid levels in mixed or sequential inoculations with either S. cerevisiae or other non-Saccharomyces species. It has a medium fermentative power, so it must be used in sequential or mixed inoculations with S. cerevisiae to get dry wines. It shows a high production of lactic acid able to affect strongly wine pH, sometimes decreasing wine pH by 0.5 units or more during fermentation. Most of the acidification is produced at the beginning of fermentation facilitating the effect in sequential fermentations because it is more competitive at low alcoholic degree. This application is especially useful in warm areas affected by climatic change. pH reduction is produced in a natural way during fermentation and prevents the addition of tartaric acid, that produces tartrate precipitations, or the use of cation exchangers resins highly efficient reducing pH but with undesirable effects on wine quality. Production of lactic acid is done from sugars thus reducing slightly the alcoholic degree, especially in strains with high production of lactic acid. Also, an improvement in the production of 2-phenylethanol and glycerol has been described. View Full-Text
Keywords: Lachancea thermotolerans; Kluyveromyces thermotolerans; acidification; wines; sequential fermentations; non-Saccharomyces Lachancea thermotolerans; Kluyveromyces thermotolerans; acidification; wines; sequential fermentations; non-Saccharomyces
►▼ Show Figures 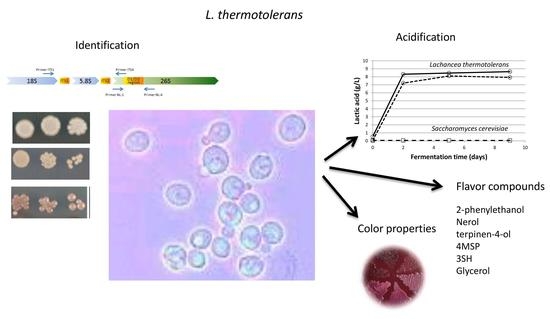