Reappraising a Controversy: Formation and Role of the Azodication (ABTS2+) in the Laccase-ABTS Catalyzed Breakdown of Lignin
Next Article in Special Issue

Biochemical Production and Separation of Carboxylic Acids for Biorefinery Applications

Succinic acid is a precursor of many important, large-volume industrial chemicals and consumer products. It was once common knowledge that many ruminant microorganisms accumulated succinic acid under anaerobic conditions. However, it was not until the discovery of Anaerobiospirillum succiniciproducens at the Michigan Biotechnology Institute (MBI), which was capable of producing succinic acid up to about 50 g/L under optimum conditions, that the commercial feasibility of producing the compound by biological processes was realized. Other microbial strains capable of producing succinic acid to high final concentrations subsequently were isolated and engineered, followed by development of fermentation processes for their uses. Processes for recovery and purification of succinic acid from fermentation broths were simultaneously established along with new applications of succinic acid, e.g., production of biodegradable deicing compounds and solvents. Several technologies for the fermentation-based production of succinic acid and the subsequent conversion to useful products are currently commercialized. This review gives a summary of the development of microbial strains, their fermentation, and the importance of the down-stream recovery and purification efforts to suit various applications in the context of their current commercialization status for biologically derived succinic acid.
Keywords: succinic acid; fermentation; platform chemicals; bio-based products; industrial solvents; biodegradable plastics succinic acid; fermentation; platform chemicals; bio-based products; industrial solvents; biodegradable plastics

Succinic acid, which is also known as butanedioic acid, 1,2-ethanedicarboxylic acid and amber acid, occurs in nature as such or in various forms of its esters. Before the development of fermentation processes for its production, succinic acid was manufactured by catalytic hydrogenation of maleic anhydride, which is a fossil-based chemical. Traditional applications of succinic acid include food additives, detergents, cosmetics, pigments, toners, cement additives, soldering fluxes, and pharmaceutical intermediates. In the past, succinic acid had a relatively small market size. It was estimated that the annual total world production in 1990 was between 16,000 and 18,000 metric tons (MT) [1]. Production of succinic acid from renewable feedstocks started to gain attention due to the increasing oil prices, dwindling oil supplies, and most importantly, the potential of converting succinic acid to a range of industrial chemicals with very large markets, such as 1,4-butanediol and other organic solvents. As an intermediate of several biochemical pathways, succinic acid is produced by many microorganisms. In fact, it is one of the metabolic co-products of ethanol fermentation by the yeast Saccharomyces cerevisiae in addition to glycerol, lactic acid, and acetic acid. The challenge of producing succinic acid biologically at commercial scale and potentially for the commodity chemical market called for development of microorganisms that could accumulate the product at high concentrations to justify economically feasible recovery. The first isolated microorganism with commercial potential was Anaerobiospirillum succiniciproducens, which was discovered by Michigan Biotechnology Institute [2,3]. At about the same time, the United States Department of Energy (US DOE) established the Alternative Feedstocks Program (AFP), which directed a team of national laboratories to develop alternative commodity chemical platforms based on renewable feedstocks. After several industrial workshops and reviews, and initial economic analysis performed by the National Renewable Energy Laboratory (NREL), succinic acid was selected as the first target platform chemical. Interests in biologically derived succinic acid steadily increased and resulted in the development of additional microbial strains, recovery and purification processes, and methods for conversion of succinic acid to important industrial chemicals and consumer products. Currently, there are four manufacturers of bio-based succinic acid, which have formed joined ventures with several other commercial entities. It has been estimated that the global succinic acid market would steadily grow at a compound annual growth rate (CAGR) of around 27.4% to reach $1.8 billion (768 million MT at $2.3/kg) in 2025 [4]. This report reviews the microbial strains for production of succinic acid, the processes for its recovery from the fermentation broths and conversion to important industrial chemicals, and commercialization of the fermentative succinic acid technology.

Traditionally, succinic acid was produced from petroleum sources to meet a relatively small market for pharmaceutical and food applications. The potential use of succinic acid as starting feedstock for production of industrial chemicals and consumer products with large markets was the main driver that launched the development of technology for bio-based succinic acid production. The potential succinic acid value chain is shown in Figure 2 [45]. The projected market volume and market share of various applications of succinic acid, which include both traditional and potential new applications, are given in Table 1 [46]. Among the potential applications of bio-based succinic acid, 1,4-butanediol (BDO) is the largest market. BDO is an industrial chemical with many uses. It can be used as a solvent starting material for several other important industrial chemicals such as γ-butyrolactone (GBL), tetrahydrofuran (THF), 2-pyrrolidone (2-P), and N-methyl-2-pyrrolidone (NMP), and can be combined with succinic acid to make polybutylene succinate (PBS) and poly(butylene succinate-co-butylene terephthalate), which are two biodegradable plastics with many potential applications. Development of catalysts for conversion of succinic acid to BDO, GBL and THF has been an area of strong interest and active research, especially for catalysis in aqueous media. Catalysts for conversion of succinic acid to pyrrolidones have also been extensively studied [47,48]. High-value rare metal-containing catalysts normally are used in BDO synthesis. This was recognized by Genomatica, a California-based company, which engineered E. coli directly for BDO production [49]. Compared to succinic acid, BDO is less acidic, has reduced base requirement during the fermentation, and requires a different recovery method. It may have a lesser purity requirement, since it eliminates the need for expensive and impurity-sensitive hydrogenation catalysts. The biological production of BDO has an even greater demand for biological reducing equivalents than succinic acid, thereby refuting the good theoretical yields seen for anaerobic production of succinic acid. Technologies for production of other potential products from succinic acid have also been actively pursued by the current bio-based succinic acid manufacturers [50,51,52,53]. 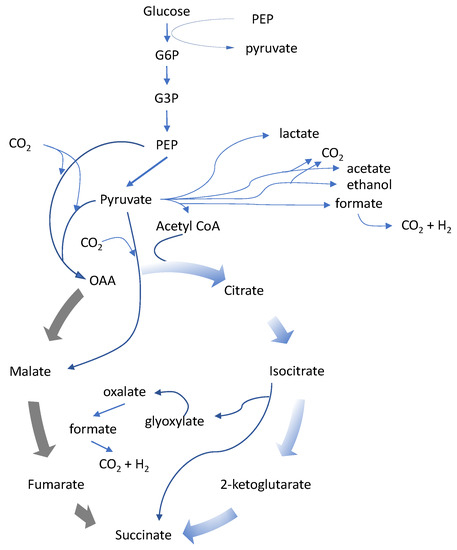 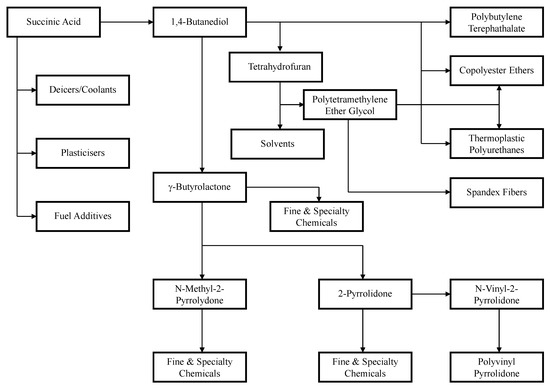