Magnetic Helicity and the Geodynamo
Previous Article in Journal

Machine Learning Techniques for Fluid Flows at the Nanoscale

The decomposition of the local motion of a fluid into straining, shearing, and rigid-body rotation is examined in this work for a compressible isotropic turbulence by means of direct numerical simulations. The triple decomposition is closely associated with a basic reference frame (BRF), in which the extraction of the biasing effect of shear is maximized. In this study, a new computational and inexpensive procedure is proposed to identify the BRF for a three-dimensional flow field. In addition, the influence of compressibility effects on some statistical properties of the turbulent structures is addressed. The direct numerical simulations are carried out with a Reynolds number that is based on the Taylor micro-scale of for various turbulent Mach numbers that range from to . The DNS database is generated with an improved seventh-order accurate weighted essentially non-oscillatory scheme to discretize the non-linear advective terms, and an eighth-order accurate centered finite difference scheme is retained for the diffusive terms. One of the major findings of this analysis is that regions featuring strong rigid-body rotations or straining motions are highly spatially intermittent, while most of the flow regions exhibit moderately strong shearing motions in the absence of rigid-body rotations and straining motions. The majority of compressibility effects can be estimated if the scaling laws in the case of compressible turbulence are rescaled by only considering the solenoidal contributions. View Full-Text
Keywords: triple decomposition; compressible turbulence; velocity gradient tensor; homogeneous isotropic turbulence; basic reference frame triple decomposition; compressible turbulence; velocity gradient tensor; homogeneous isotropic turbulence; basic reference frame
►▼ Show Figures 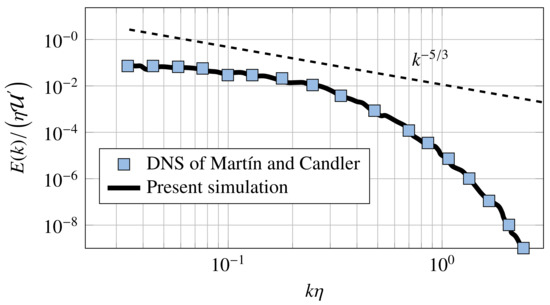