The formation of rogue oceanic waves may be the result of different causes. Various factors (winds, currents, dispersive focussing, depth, nonlinear focussing and instability) make this subject intriguing, and yet its understanding is quite relevant to practical issues. Here, we deal only with the nonlinear character of this dynamics, which has been recognised as the main ingredient to rogue wave formation. In this perspective, the formation of rogue waves requires a non-vanishing and unstable background such as a nonlinear regular wave train with attractive self-interaction. The simplest, best known model of such dynamics is the universal nonlinear Schrödinger equation. This has proven to serve as a good approximation in various contexts and over a broad range of experimental settings. This model aims to give the slow evolution of the envelope of one monochromatic wave due to nonlinearity. Here, we naturally consider the same problem for the envelopes of two weakly resonant monochromatic waves. As for the nonlinear Schrödinger equation, which is integrable, we adopt an integrable model to describe the interaction of two waves. This is the system of two coupled nonlinear Schrödinger equations (Manakov model) with self- and cross-interactions that may be both defocussing and focussing. We first discuss the linear stability properties of the background by computing the spectrum for all values of the parameters such as coupling constants and amplitudes. In particular, we relate the instability bands to properties of the spectrum and compute the gain function (or growth rate). We also relate to the stability spectrum the value of the spectral variable, which corresponds to a rogue wave solution. In contrast with the nonlinear Schrödinger equation, different types of single rogue wave exist that correspond to different values of the spectral variable even in the same spectrum. For these critical values, which are completely classified, we give the corresponding explicit expression of the rogue wave solution that follows from the well known Darboux–Dressing transformation method. Although not all systems of two coupled nonlinear Schrödinger equations that have been derived in water wave dynamics are integrable, our investigation contributes to the understanding of new effects due to wave coupling, at least for model equations that, even if not integrable, are close enough to the model considered here. For instance, our findings lead to investigate rogue waves generated by instabilities due to self- and cross-interactions of defocusing type. An illustrative selection of two coupled rogue waves solutions is displayed. View Full-Text
Keywords: rogue wave solutions; coupled nonlinear Schrödinger equations; Manakov model; linear stability; instabilities rogue wave solutions; coupled nonlinear Schrödinger equations; Manakov model; linear stability; instabilities
►▼ Show Figures 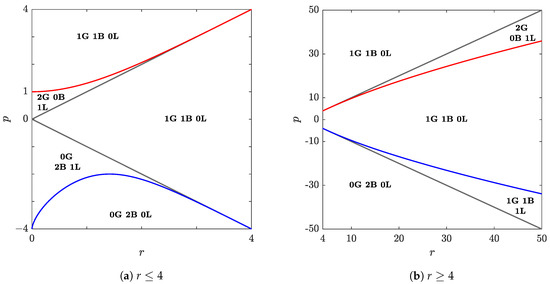