Fully atomistic molecular dynamics simulations are employed to study in detail the interactions between a complex comprised by a PEGylated hyperbranched polyester (HBP) and doxorubicin molecules, with a model dipalmitoylphosphatidylglycerol membrane in an aqueous environment. The effects of the presence of the lipid membrane in the drug molecules’ spatial arrangement were examined in detail and the nature of their interaction with the latter were discussed and quantified where possible. It was found that a partial migration of the drug molecules towards the membrane’s surface takes place, driven either by hydrogen-bonding (for the protonated drugs) or by hydrophobic interactions (for the neutral drug molecules). The clustering behavior of the drug molecules appeared to be enhanced in the presence of the membrane, while the development of a charge excess close to the surface of the hyperbranched polymer and of the lipid membrane was observed. The uneven charge distribution created an effective overcharging of the HBP/drug complex and the membrane/drug surface. The translational motion of the drug molecules was found to be strongly affected by the presence of the membrane. The extent of the observed changes depended on the charge of the drug molecule. The build-up of the observed charge excesses close to the surface of the polymeric host and the membrane, together with the changes in the diffusional behavior of the drug molecules are of particular interest. Both phenomena could be important at the latest stages of the liposomal disruption and the release of the drug cargo in formulations based on relevant liposomal carriers. View Full-Text
Keywords: dipalmitoylphosphatidylglycerol (DPPG); doxorubicin; hyperbranched polyester; simulations dipalmitoylphosphatidylglycerol (DPPG); doxorubicin; hyperbranched polyester; simulations
►▼ Show Figures 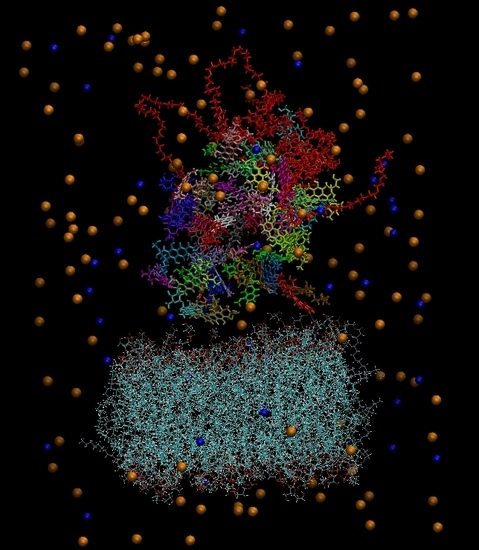 Arsenidis, P.; Karatasos, K. Computational Study of the Interaction of a PEGylated Hyperbranched Polymer/Doxorubicin Complex with a Bilipid Membrane. Fluids 2019, 4, 17.


Arsenidis P, Karatasos K. Computational Study of the Interaction of a PEGylated Hyperbranched Polymer/Doxorubicin Complex with a Bilipid Membrane. Fluids. 2019; 4(1):17.


Arsenidis, Prodromos; Karatasos, Kostas. 2019. "Computational Study of the Interaction of a PEGylated Hyperbranched Polymer/Doxorubicin Complex with a Bilipid Membrane." Fluids 4, no. 1: 17.