Not Only a Formulation: The Effects of Pickering Emulsion on the Entomopathogenic Action of Metarhizium brunneum
Next Article in Special Issue

Impacts of Sodium Arsenite on Wood Microbiota of Esca-Diseased Grapevines

Although sodium arsenite was widely used in Europe until its ban in 2003, its effects on microorganisms is not clearly understood. To improve our understanding of sodium arsenite curative effect on GTDs, grapevines displaying esca-foliar symptoms from different French regions (Alsace, Champagne, Languedoc) were treated or not with sodium arsenite, and analyzed for their wood microbiota. Using metabarcoding, we identified the fungal and bacterial taxa composition of microbiota colonizing woody trunk tissues. Large differences in fungal microbiota composition between treated and untreated grapevines were observed while no major impacts were observed on bacteria microbiota. The main fungal species detected in untreated necrotic woody tissues was Fomitiporia mediterranea (63–94%), a fungal pathogen associated with esca. The relative abundance of this fungal species significantly decreased after sodium arsenite treatment in the three vineyards, in particular in white-rot necrotic tissues and their borders (−90%). F. mediterranea was the most sensitive to sodium arsenite among fungi from grapevine woody tissues. These results strongly suggest that the effect of sodium arsenite on GTDs is due to its ability to efficiently and almost specifically eliminate F. mediterranea from white-rot necrotic tissues, allowing saprobic fungi to colonize the tissues previously occupied by this pathogenic fungus. View Full-Text
Keywords: fungicide; trunk disease; white rot; Fomitiporia mediterranea; metabarcoding fungicide; trunk disease; white rot; Fomitiporia mediterranea; metabarcoding
►▼ Show Figures 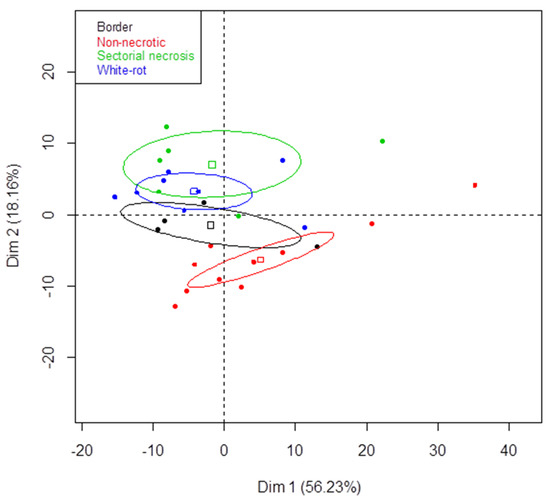