Quantification of Pneumocystis jirovecii: Cross-Platform Comparison of One qPCR Assay with Leading Platforms and Six Master Mixes
Next Article in Special Issue

N-acetylglucosamine (GlcNAc) is being increasingly recognized for its ability to stimulate cell signaling. This amino sugar is best known as a component of cell wall peptidoglycan in bacteria, cell wall chitin in fungi and parasites, exoskeletons of arthropods, and the extracellular matrix of animal cells. In addition to these structural roles, GlcNAc is now known to stimulate morphological and stress responses in a wide range of organisms. In fungi, the model organisms Saccharomyces cerevisiae and Schizosaccharomyces pombe lack the ability to respond to GlcNAc or catabolize it, so studies with the human pathogen Candida albicans have been providing new insights into the ability of GlcNAc to stimulate cellular responses. GlcNAc potently induces C. albicans to transition from budding to filamentous hyphal growth. It also promotes an epigenetic switch from White to Opaque cells, which differ in morphology, metabolism, and virulence properties. These studies have led to new discoveries, such as the identification of the first eukaryotic GlcNAc transporter. Other results have shown that GlcNAc can induce signaling in C. albicans in two ways. One is to act as a signaling molecule independent of its catabolism, and the other is that its catabolism can cause the alkalinization of the extracellular environment, which provides an additional stimulus to form hyphae. GlcNAc also induces the expression of virulence genes in the C. albicans, indicating it can influence pathogenesis. Therefore, this review will describe the recent advances in understanding the role of GlcNAc signaling pathways in regulating C. albicans morphogenesis and virulence. View Full-Text
Keywords: N-acetylglucosamine; GlcNAc; Candida albicans; hyphal morphogenesis; NGT1; HXK1; NAG1; DAC1 N-acetylglucosamine; GlcNAc; Candida albicans; hyphal morphogenesis; NGT1; HXK1; NAG1; DAC1
►▼ Show Figures 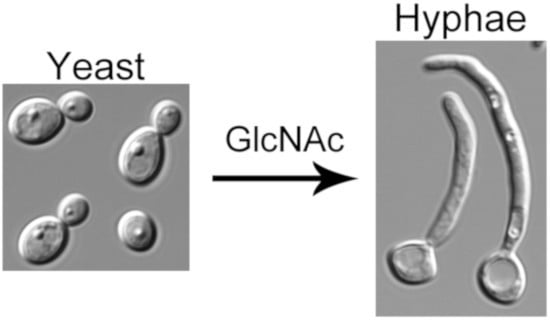