Candida glabrata Biofilms: How Far Have We Come?

Penicillium is a large genus of common molds with over 400 described species; however, identification of individual species is difficult, including for those species that cause postharvest rots. In this study, blue rot fungi from stored apples and pears were isolated from a variety of hosts, locations, and years. Based on morphological and cultural characteristics and partial amplification of the β-tubulin locus, the isolates were provisionally identified as several different species of Penicillium. These isolates were investigated further using a suite of molecular DNA markers and compared to sequences of the ex-type for cognate species in GenBank, and were identified as P. expansum (3 isolates), P. solitum (3 isolates), P. carneum (1 isolate), and P. paneum (1 isolate). Three of the markers we used (ITS, internal transcribed spacer rDNA sequence; benA, β-tubulin; CaM, calmodulin) were suitable for distinguishing most of our isolates from one another at the species level. In contrast, we were unable to amplify RPB2 sequences from four of the isolates. Comparison of our sequences with cognate sequences in GenBank from isolates with the same species names did not always give coherent data, reinforcing earlier studies that have shown large intraspecific variability in many Penicillium species, as well as possible errors in some sequence data deposited in GenBank. View Full-Text
Keywords: blue molds; stored fruits; Penicillium spp.; ITS; benA; CaM blue molds; stored fruits; Penicillium spp.; ITS; benA; CaM
►▼ Show Figures 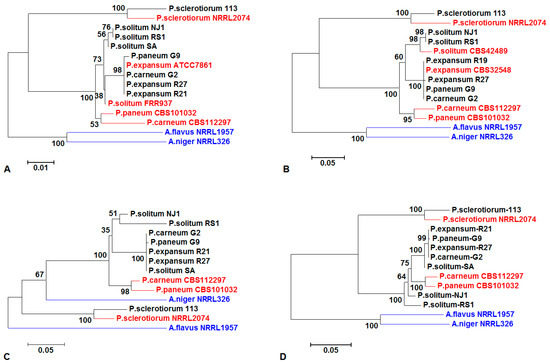