Globally, the use of ethnoveterinary medicine as remedies for animal health among different ethnic groups justify the need for a systematic exploration to enhance their potential. In addition, the increasing popularity and utilisation of woody plants remain common in traditional medicine, which may be attributed to their inherent benefits. The current review was aimed at analysing ethnoveterinary surveys, biological activities, and secondary metabolites/phytochemical profiles of the woody plants of South Africa. Eligible literature (period: 2000 to 2020) were retrieved from different databases such as Google Scholar, PubMed, Sabinet, and Science Direct. Based on the inclusion and exclusion criteria, 20 ethnoveterinary surveys were eligible and were subjected to further analysis. We identified 104 woody plant species from 44 plant families that are used in the treatment of different diseases in animals, particularly cattle (70%) and goats (20%). The most mentioned (with six citations) woody plants were Terminalia sericea Burch. ex DC and Ziziphus mucronata Willd., which were followed by plants with five (Cussonia spicata Thunb., Pterocarpus angolensis DC and Vachellia karroo (Hayne) Banfi & Galasso) or four (Acokanthera oppositifolia (Lam.) Codd, Cassia abbreviata Oliv., and Strychnos henningsii Gilg) individual mentions. The most dominant families were Fabaceae (19%), Apocynaceae (5.8%), Rubiaceae (5.8%), Anacardiaceae (4.8%), Combretaceae (4.8%), Euphorbiaceae (4.8%), Malvaceae (4.8%), Rhamnaceae (4.8%), and Celastraceae (3.8%). Bark (33%), leaves (29%), and roots (19%) were the plant parts dominantly used to prepare remedies for ethnoveterinary medicine. An estimated 20% of woody plants have been screened for antimicrobial, anthelmintic, antioxidant, and cytotoxicity effects. Phytochemical profiles established a rich pool of valuable secondary metabolites (phenolic, flavonoids and condensed tannins) that may be responsible for the exerted biological activities. Overall, the significant portion of woody plants lacking empirical evidence on their biological effects indicates a major knowledge gap that requires more research efforts. View Full-Text
Keywords: antibacterial; antioxidant; ethnoveterinary; Fabaceae; livestock diseases; retained placenta antibacterial; antioxidant; ethnoveterinary; Fabaceae; livestock diseases; retained placenta
►▼ Show Figures 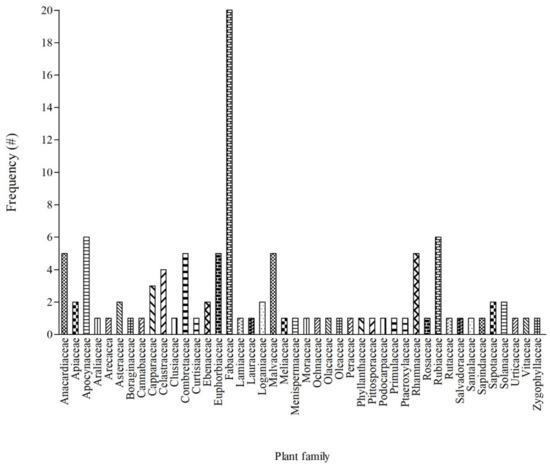