Methods to treat and prevent mastitis in the dry period have been available since the middle of last century [1,2]. The current and most commonly used methods are teat sealants and dry cow antibiotic therapy. The use of these formulations reduced the incidences of intramammary infections in the dry period and early lactation in treated compared to non-treated quarters [3]. Teat sealants containing bismuth subnitrate were developed in the 1970s and are effective at preventing new dry period infections in challenge and natural exposure studies [4,5]. The proposed mechanism of action of bismuth-based products is the creation of a physical barrier that prevents passage of mastitis pathogens into the teats, but this has not been shown experimentally despite their proven efficacy.
The teat canal is the duct that connects the lumen of the udder with the external environment. It is lined by modified teat skin. Macrophages, Langerhans, plasma, and dendritic cells have been described as being present under the basal membrane in the teat canal epithelial tissue. They are dedicated cells that take up, process, and present antigens to T-cells in their major histocompatibility complex (MHC) receptors during infections [6,7]. Neutrophils are polymorphonuclear cells (PMN), which are the first active line of defense against pathogens entering the mammary gland. The surveillance roles conducted by PMN consist mainly of their ability to migrate to the site of infection (chemotaxis), a respiratory burst and myeloperoxidase (MPO) release. During phagocytosis, neutrophils increase their oxygen consumption through the activity of nicotinamide adenine dinucleotide phosphate oxidase (NADPH-oxidase), and via successive electron reductions generate superoxide anion O2 and hydrogen peroxide (H2O2) [8,9]. This process is known as the respiratory burst. These oxygen metabolites activate additional reactive oxygen species (ROS) that are strongly anti-microbial, for example MPO. Myeloperoxidase is an enzyme present in azurophilic granules in neutrophils and performs a vital role in destroying phagocytosed microorganisms. In mastitis, neutrophils migrate from blood at the Fürstenberg’s rosette and teat sinus into the teat lumen, following chemotactic signals released from these antigen presenter cells, bacterial invaders or damaged tissue [10,11]. The presence of high somatic cell counts (SCC) in milk has a protective effect against mastitis induced by major pathogens [12,13,14]. The presence of neutrophils in milk could be considered valuable in preventing infection by major mastitis pathogens, especially during the early dry period and after treatment with internal teat sealants. However, most of the reviewed literature shows that an increase in somatic cell counts (PMN, macrophages, and desquamating epithelial tissue) are signs of intramammary infection [15,16]. A chemotactic effect of bismuth subnitrate based teat sealant has not been experimentally demonstrated. Based on this, another proposed mechanism of action of bismuth subnitrate based teat sealants is the generation of a local cellular immune response after treatment that protects and, hypothetically, cures subclinical mastitis [17]. Similarly, a novel keratin-based teat sealant product under development showed, in preliminary studies, an increase in SCC after treatment suggestive of a mechanism of action related to the recruitment of neutrophils into the teat canal and sinus [18].
The hypothesis of this study is that bismuth subnitrate and keratin-based teat sealants induce chemotaxis and activation of neutrophils in the teat canal and sinus and hence protect the mammary gland against mastitis infections during the early dry period. In order to test this hypothesis, our objective was to evaluate the ability of bismuth subnitrate and micronized keratin to induce a cellular response (migration and activation) in vitro.

The study protocol was approved by the Massey University Animal Ethics Committee, protocol number 18/02, on the 26 February 2018 Fifty-milliliter blood samples were collected into EDTA tubes (BD-vacutainer K2E EDTA, BD-Plymouth, PL6 7BP, UK) by coccygeal venipuncture of 12 dairy cows at mid-lactation. This study compared the in vitro activation of neutrophils in response to bismuth subnitrate and micronized keratin against a negative control using media only.
Neutrophils were isolated from blood and the number of neutrophils per sample was determined using a TC20 automated cell counter, (Bio-Rad Laboratories, Hercules, CA 94547, USA). Neutrophil suspensions were used to complete chemotaxis assays and myeloperoxidase tests in vitro. Within 1 h of blood collection, neutrophils were separated from whole blood samples. Briefly, approximately 50 mL of blood was transferred into two 50 mL conical tubes and centrifuged at 1500× g for 30 min at room temperature. After centrifugation, the plasma, buffy coat layer and top layer (approximately 1/3) of packed red blood cells were removed by aspirating with a Pasteur pipette. Approximately seven milliliters of blood were left in each tube and 38 mL of MQ water was added to lyse the red blood cells. The tube was rotated for 5 s. Then, 5 mL of 10× g concentrated PBS pH 7.4 was added and the tube immediately rotated again to restore osmotic balance for the cells. The tubes were centrifuged at 330× g for 10 min at room temperature (20–22 °C) and the supernatant discarded, leaving a neutrophils-rich red pellet at the bottom of each tube. The pellet was washed with 10 mL of 1 × PBS pH 7.4 and vortexed to mix. The tubes were centrifuged for 5 min at 670× g at room temperature 20–22 °C, the supernatant was discarded, and the cells re-suspended in 2 mL of the media required in the procedures for each performed assay. Cell suspensions prepared using this procedure had ≥90% pure populations of living neutrophils confirmed by cell counting with trypan blue.

A chemotaxis assay was performed using a CytoSelect 96-well Cell Migration Assay (3 µm, Fluorometric Format, Cell Biolabs. Inc., San Diego, CA 92126, USA). A cell suspension containing approximately 5 × 106 cells/mL was prepared in serum free-media (RPMI 1640, R8758-500ML, Sigma Aldrich, Inc. Christchurch, New Zealand) containing 0.5% bovine serum albumin (BSA). Fetal bovine serum 10% was used as a positive control chemoattractant. Fetal bovine serum 10% was used as a chemotactic agent for the positive control (PC) and 0.5% BSA-RPMI was used as the negative control (NC). Keratin and bismuth subnitrate suspensions were prepared as follows to create high and low concentrations (3% and 1.5%, respectively). These concentrations were chosen, as 3% was the maximum concentration of bismuth subnitrate that could be manipulated with minimal precipitation of the suspension. For the keratin and bismuth suspensions in high concentrations (KH and BH treatments), 1.2 g of bismuth subnitrate or sterile micronized keratin were added to 40 mL of RPMI. Keratin and bismuth at low concentrations (KL and BL treatments) were prepared with 0.6 g of bismuth subnitrate or micronized keratin in 40 mL of RPMI. In a cell culture chamber, 150 µL of KH, BH, KL, BL, the positive control and RPMI with 0.5% BSA used as the negative control (NC) were loaded in the feeder tray (bottom plate) in triplicates. A membrane chamber was placed on top of the feeder tray. One hundred microlitres of the cell suspension were added to each well and the plate was incubated in a cell culture incubator at 37 °C for 3 h. The cell suspension from inside the membrane chamber was carefully discarded by inverting the plate and the insert chamber was transferred to a clean 96-well plate containing 150 µL of pre-warmed Cell Detachment Solution. This plate was incubated for 30 min at 37 °C. Cells were completely dislodged from the underside of the membrane by gently tilting the insert several times in the Detachment Solution, and the insert was removed and discarded. Seventy-five microlitres of media from the feeder tray were combined with 75 µL of the Detachment Solution in a clean 96-well plate. Fifty microlitres of 4X Lysis Buffer/CyQuant GR dye solution was added to each well (already containing 150 µL of Cell Detachment Solution). This step combines cells that migrated through the membrane and into the medium and migratory cells that were detached from the bottom side of the membrane by the Cell Detachment Solution. The plate was incubated for 20 min at room temperature. One hundred and fifty µL of the mixture was transferred to a 96-well plate suitable for fluorescence measurement. Fluorescence was read using a fluorescence plate reader (Flexstation 3 by Molecular Devices, Biostrategy, Auckland, New Zealand) at 480 nm/520 nm (SoftMaxPro version 5.4.1, Molecular Devices, Biostrategy, Auckland, New Zealand). Fluorescence levels in this study were obtained as a result of the lysis of migrated cells in the wells at the bottom of the analyzed plate.

Myeloperoxidase release was measured in a 96-well plate from Phorbol 12-myristate 13-acetate (PMA, positive control), keratin, or bismuth-stimulated neutrophils and from lysed neutrophils to account for the total amount of MPO contained within the neutrophils. Isolation of neutrophils was performed as described above obtaining 2.5 × 107 cells/mL of HBSS (14025092, Life Technologies NZ Ltd. Auckland, New Zealand). A 96-well plate (ELISA Microplate 96F, GR655061, Grenier Bio-one, International GmbH, Kremsmünster, Austria) was seeded with 50 µL/well of lysis reagent, 50 µL/well of stimulation reagent or 50 µL/well of bismuth or keratin in high concentration (3% BH, KH). Negative control (NC) wells contained 50 µL/well of HBSS. The lysis reagent contained 0.02% hexadecyltrimethylammonium bromide (Sigma) in MQ water. Stimulation reagent was prepared by mixing 1 part of CaI stock solution (50 μg/mL calcium ionophore A23187 (Sigma) in HBSS), 1 part of cytochalasin B stock solution (50 μg/mL cytochalasin B (Sigma) in HBSS), 1 part of PMA stock solution (20 μg/mL PMA (Sigma) in HBSS, and 7 parts of HBSS. Plates were incubated at 30 °C for 60 min. 3,3′,5,5′-Tetramethylbenzidine (Becton Dickinson Ltd. Auckland, New Zealand) and hydrogen peroxide were mixed 1:1, and 100 μL of the mixture was added to each well. Colour was allowed to develop at room temperature for approximately 2 min and 50 μL of 2 N H2SO4 was added as a stop reagent. Plates were centrifuged at 600× g for 5 min at room temperature, and 150 μL/well was transferred into a new plate. Optical density at 450 nm was determined using a microtiter plate spectrophotometer (Versamax, Molecular Devices, Sunnyvale, CA, USA).

The data from these studies were not normally distributed, so they were transformed by log2 transformation. Mixed linear models included treatment as a fixed effect and cow as a random effect in SAS version 9.4 (SAS Institute Inc., Cary, NC, USA). Statistical significance was set at p < 0.05. Statistical differences were based on Tukey-Kramer adjusted pairwise comparison per product tested against the negative control.

Bismuth and keratin induced a lower release of MPO than the negative control (p < 0.001, Figure 2). Negative control (NC) values represent approximately 50% of the values obtained by the total lysis of the neutrophils and their total MPO content (Figure 2, Lysis).

Results of the described in vitro experiments indicated that bismuth and keratin products did not induce chemotaxis nor activate neutrophils. Further in vivo research is recommended to address questions on the mechanisms of action of bismuth subnitrate and micronized keratin when utilized as internal teat sealants for prevention of intramammary infections.

We greatly appreciate the assistance received from Axel Heiser, Mallory Crookenden and Kristene Gedye in the development of the study protocol, their technical assistance in the laboratory, and the review of this manuscript. 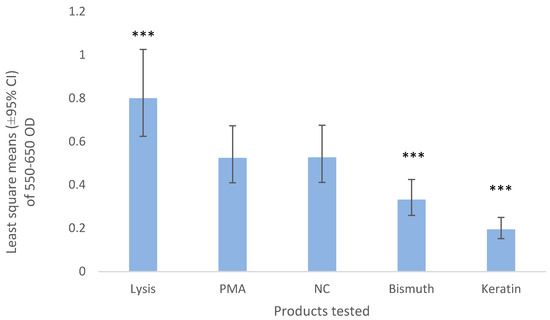