We prospectively included in the study all cats presenting for echocardiographic examination at the Cardiology Service of the Veterinary Teaching Hospital of Perugia University between November 2019 and February 2020. Healthy cats were recruited from hospital staff, veterinary students and clients. Cats were considered healthy based on an unremarkable history, complete physical examination and conventional transthoracic echocardiography. Cats with persistent non-sinus arrhythmias were excluded. Diseased cats receiving cardiac medications were not excluded. The present study protocol was presented to the local Ethical Committee and was carried out in accordance with the Declaration of Helsinki. After presentation of the study to the Ethical Committee of the Perugia University, no ethical concern was retained and advised that Ethics Approval was not required.

Images of the LV for STE were obtained from the RP4Ch and LAP4Ch views and three cineloops (at least three beats for each) from both echocardiographic views were acquired for off-line analysis. Both echocardiographic views were required for cats to be included in the analyses. The visualization of the LV was optimized obtaining the image with the longest long-axis dimension possible in both views. If necessary, we increased the sector width during the acquisition of the RP4Ch view. In this way, the foreshortening of the LV apex was avoided. All recorded cineloops were analyzed by one experienced examiner (D.C.) using the XstrainTM software (Esaote, Genova, Italy). A frame with an optimally visualized endocardial and epicardial borders were selected for both views. The software automatically traced 10 equidistant lines among 3 starting points fixed by the operator (2 at the mitral valve annulus and 1 at the LV apex) for delimiting both endocardial and epicardial borders. These 13 points followed the endocardial and epicardial border during entire cardiac cycle and the operator could check if tracking were optimal or the points needed to be manually adjusted (Figure 1). The software divided the LV into 6 segments and generated an average value of the longitudinal strain and strain rate. Only average value of the maximal systolic peak of the LV longitudinal strain and strain rate of the endocardial and epicardial border for both views were analyzed (Figure 1). The mean value of three consecutive cardiac cycles in sinus rhythm for each variable was obtained and used for statistical analysis.
To assess the intra-observer measurement variability, ten echocardiograms of ten different cats were randomly selected from stored images for repeated measurements. Intra-observer measurement variability was obtained from each view analyzing the same cardiac cycles a second time at least 2 weeks after the initial examination.

We compared heart rates during image acquisition in each echocardiographic view by a Wilcoxon Signed Ranks test.
We examined if the differences between the two echocardiographic views were normally distributed using a Shapiro–Wilk test. Because these were normally distributed, we compared the systolic peak of the LV longitudinal strain and strain rate values of endocardial and epicardial border between the two echocardiographic views using Limits of Agreement analysis for all cats [23].
We determined the intra-observer measurement variability for each view by calculating the percent difference between measurements by the same observer, as previously reported [8,9,10,24].
All analyses were performed using commercial statistical software (MedCalc Statistical Software version 19.1.5 (MedCalc Software bv, Ostend, Belgium; https://www.medcalc.org; 2020).

Our study demonstrates that longitudinal LV strain and strain rate values obtained from the RP4Ch or LAP4Ch view are similar in healthy and diseased cats. Indeed, the methods show no fixed or proportional bias, suggesting that they provide similar estimates of longitudinal LV deformation. However, only endocardial longitudinal strain values obtained with the two views agreed sufficiently to be used interchangeably. Conversely, the agreement between the two echocardiographic views for epicardial longitudinal strain/strain rate and endocardial longitudinal strain rate values was insufficient to recommend interchangeability. Intra-observer measurement variability from RP4Ch view was acceptable for all STE variables.
STE is an advanced imaging technique useful to assess myocardial function by strain and strain rate analysis. This novel echocardiographic modality is angle-independent, therefore beam angles do not influence the deformation analysis. Recently, the feasibility for assessment of the longitudinal strain and strain rate using STE from the RP4Ch view has been described in dogs [18]. This approach allowed investigators to obtain a good quality four chamber image for STE analysis, but, as the authors reported, a suboptimal tracking of the apical segments, especially during the ventricular diastole, could cause an inadequate analysis [18]. These authors concluded that data obtained from RP4Ch and LAP4Ch views were not considered interchangeable [18]. Our findings differed from those of the previous investigators; indeed, apical segments of the LV were easily visualized, and we could track the points used to delineate the endocardial and epicardial borders. Moreover, the software followed the myocardium during the entire cardiac cycle and the LV apex did not go out of the sector scan. We speculate that this different with previous study in dogs may be explained by the cardiac dimensions and orientation of the heart within the chest in cats compared to the dogs. Commonly, the LV was entirely visualized in the sector scan by RP4Ch view during the entire cardiac cycle in cats. On the other hand, in dogs, especially large breeds, the LV apex can move out of the scan sector in RP4Ch view.
A complete echocardiographic examination includes the visualization of both RP4Ch and LAP4Ch views in cats [18]. The LAP4Ch view is commonly used for LV Doppler and tissue Doppler imaging evaluations because an optimal alignment with blood flow or mitral annulus can be obtained. Other investigators have examined STE analysis of the LV from LAP4Ch view in cats [13,14,15,16]. However, RP4Ch view is often easier to obtain than the LAP4Ch view and should be considered when LAP4Ch view is suboptimal. Our results showed that strain and strain rate values were similar between the two echocardiographic views, but only endocardial longitudinal strain values were interchangeable. Contrary to the previous study in dogs [18], we could observe a difference between endocardial and epicardial deformation analysis because our software permitted separate evaluation of these components of the LV strain and strain rate.
Some authors have reported that RP4Ch view cannot include the true apex of the LV in dogs [25]; however, similar problems occur in humans from the LAP4Ch view [26]. Recently, several studies have reported that foreshortening of the LV in RP4Ch view was not evident if the view was imaged correctly in dogs [27,28,29,30]. In our study, to avoid a false visualization of the LV apex and a shortened LV long axis, we took care to obtain a LV image in both views with the longest possible long-axis dimension.
STE analysis requires high echocardiographic image quality to follow the speckles frame-by-frame during the cardiac cycle. Our software easily and consistently followed the epicardial and endocardial borders during the cardiac cycle in both echocardiographic views. However, although epicardial deformation variables and endocardial strain rate showed similar values using different echocardiographic views, we did not consider them interchangeable, because we deemed the absolute differences or the percentage differences too large. This may suggest that tracking of the epicardial border is suboptimal compared to endocardial border, possibly because of interference from pericardium or lungs. Moreover, whether or not STE has a certain intrinsic angle-dependence which can influence strain and strain rate values in different views, remains undetermined.
Intra-observer measurement variability showed low values for strain analysis in both echocardiographic views, while higher intra-observer measurement variability was observed for strain rate analysis. These findings agree with our previous STE studies of left atrium and right ventricle [8,9,10]; therefore, we cannot exclude that this high variability for some variables may be software dependent.
Our study has some limitations. We have evaluated only the global performance of the LV (average strain and strain rate of all segments, while in the previous study in dogs [18], the investigators analyzed and compared individual myocardial segments. However, veterinary clinicians are mostly interested in assessing global strain and strain rate, rather than regional dyskinesis, because myocardial infarction occurs infrequently in dogs and cats. Furthermore, we performed the strain and strain rate analysis using XstrainTM software, so our findings cannot be generalized to other STE software. Indeed, data obtained from software of different vendors are not interchangeable [31]. Finally, in our study population no cats with dilated cardiomyopathy or end-stage hypertrophic cardiomyopathy were present. The dilated LV, typically observed in these cardiomyopathies’ forms, could not permit to visualize the LV apex within the sector scan from RP4Ch view. 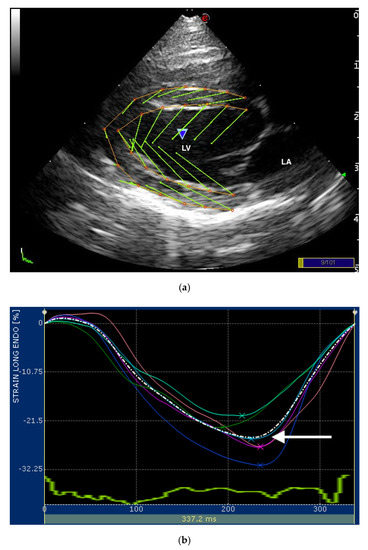 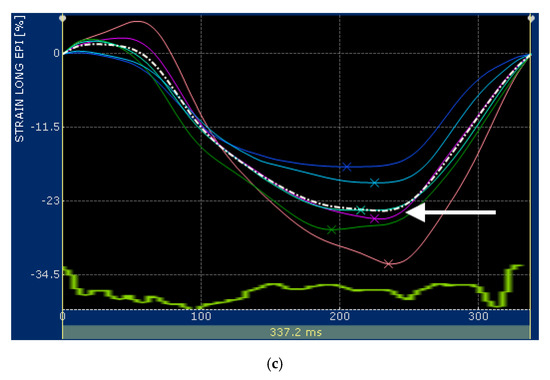 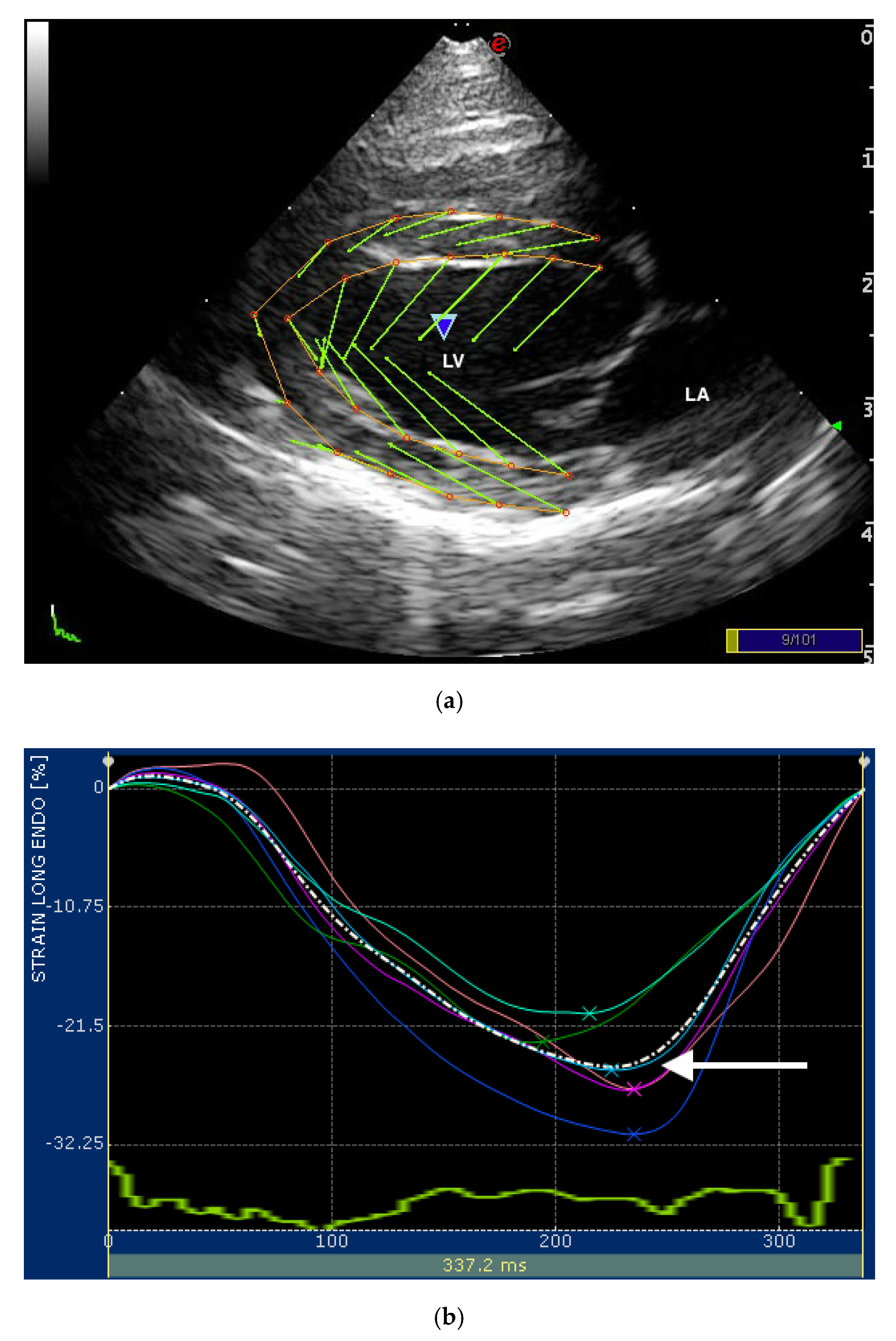 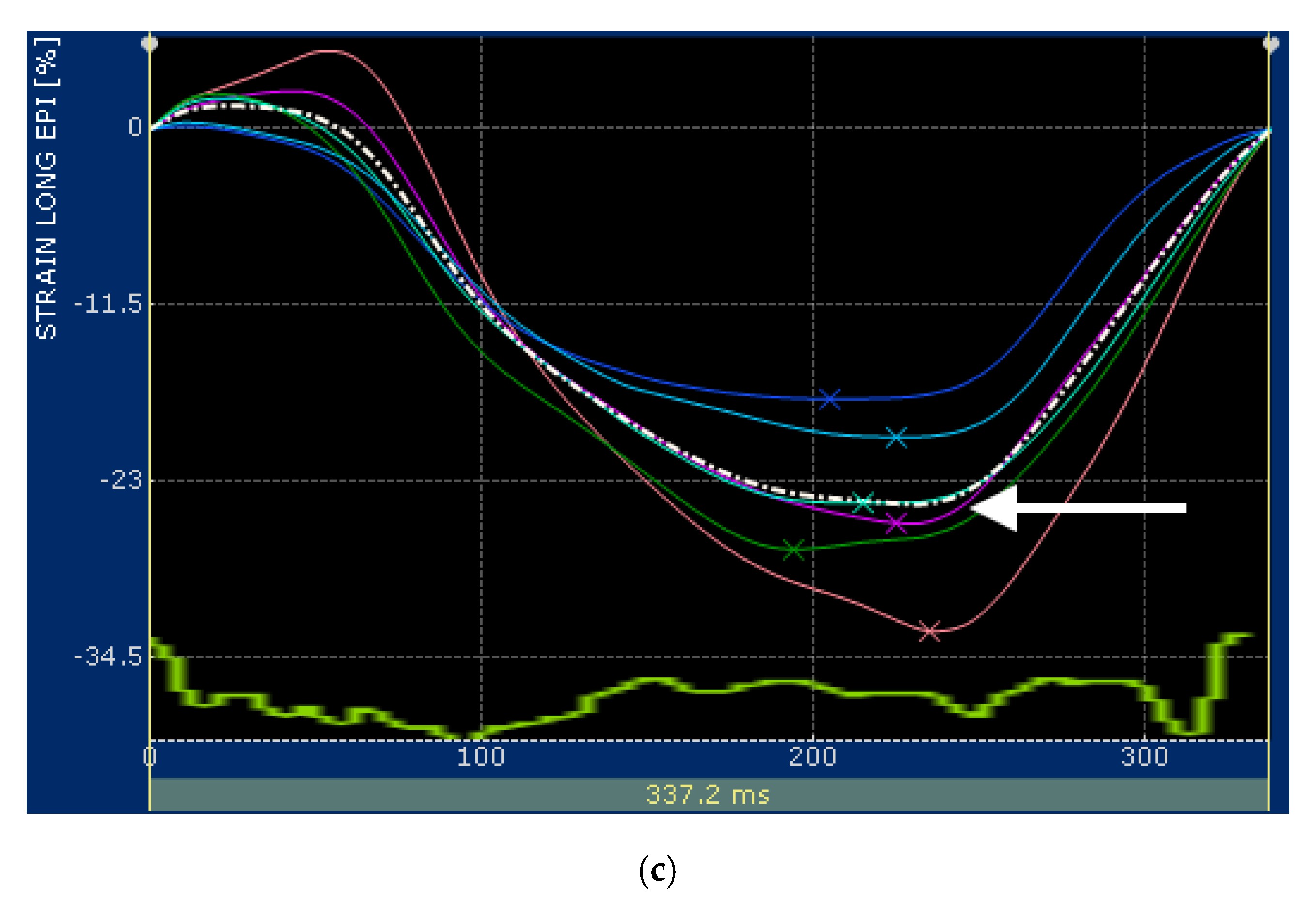 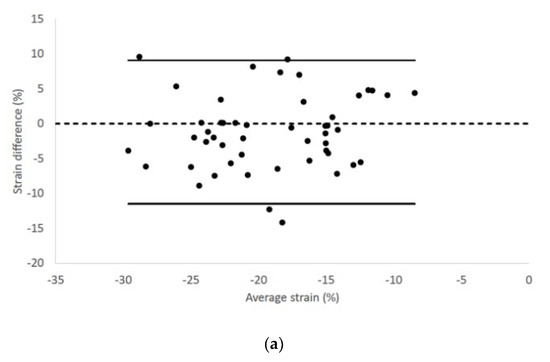 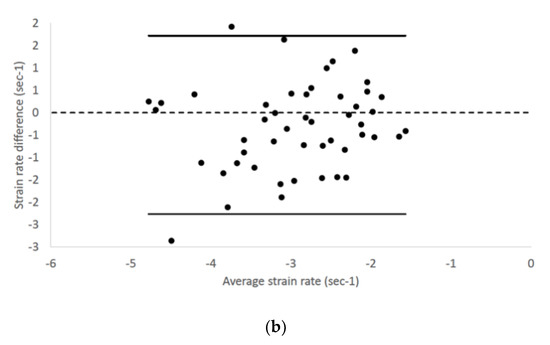 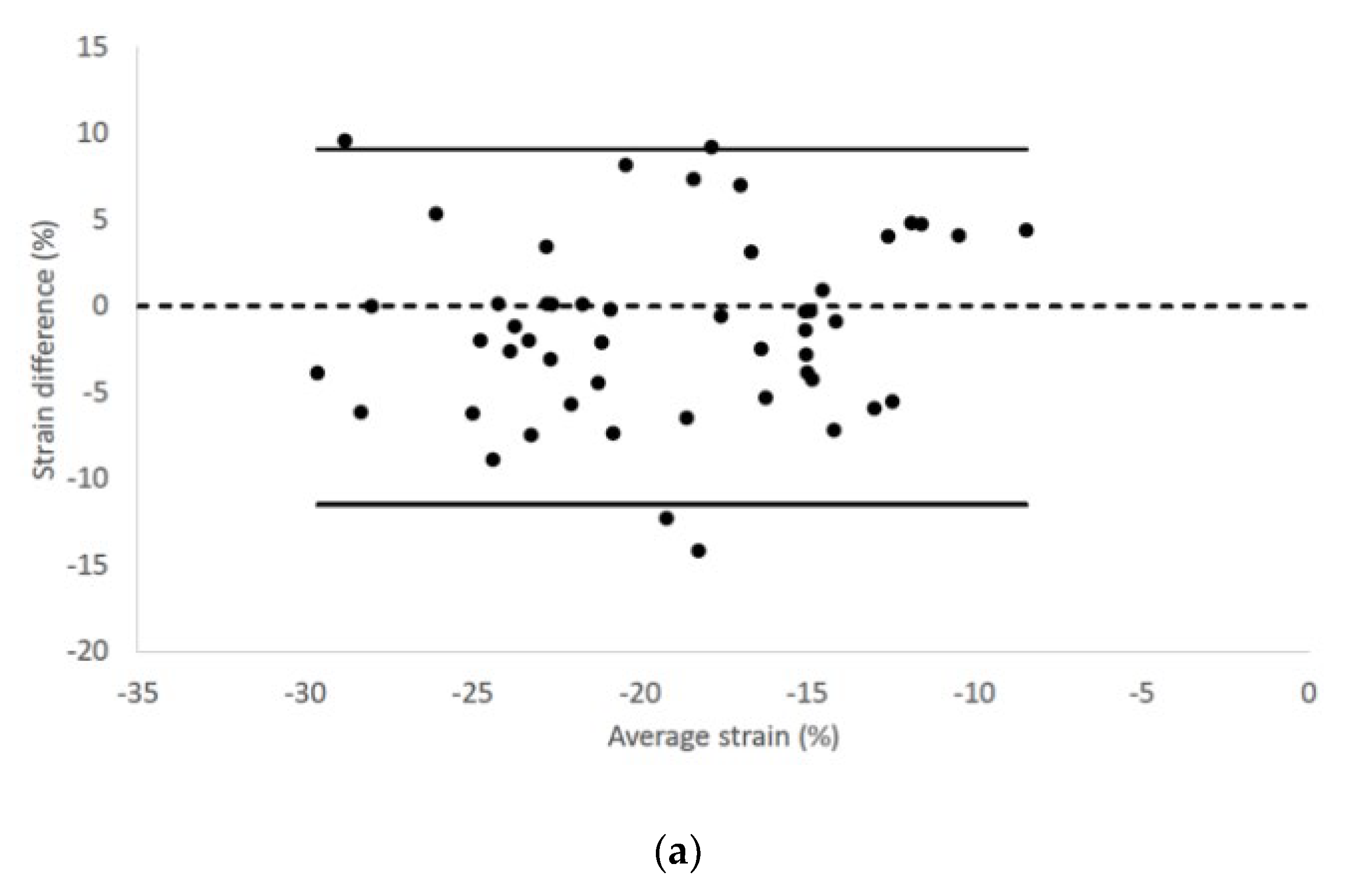