Kenya is home to Africa’s third largest population of dromedary camels, and production at commercial and local levels are increasingly important. In pastoral and nomadic communities in the arid and semi-arid lands (ASALs), camels play a vital role in food security, while commercial milk production and formalized export markets are rapidly emerging as camel populations expand into non-traditional areas. Until recently, little focus was placed on camels as hosts of zoonotic disease, but the emergence of Middle Eastern respiratory coronavirus (MERS-CoV) in 2012, and the discovery of exposure to the virus in Kenyan camels, highlighted the need for further understanding of this area. This systematised review utilised a robust search strategy to assess the occurrence of camel-associated zoonoses in Kenya and to evaluate the quality of the published literature. Seventy-four studies were identified, covering sixteen pathogens, with an increasing number of good quality studies in recent years. Despite this, the area remains under-researched and there is a lack of robust, high-quality research. Trypanosome spp., Echinococcus granulosus and Brucella spp. appeared most frequently in the literature. Pathogens with the highest reported prevalence were MERS-CoV (0–100%), Echinococcus granulosa (7–60%) and Rift Valley fever virus (7–57%). Exposure to Brucella spp., Coxiella burnetii and Crimean-Congo haemorrhagic fever virus showed higher levels in camel or camel-associated vectors than other livestock species, although brucellosis was the only disease for which there was robust evidence linking camel and human exposure. Zoonotic agents with less severe human health outcomes, such as Dermatophilosus congolensis and contagious ecthyma, were also represented in the literature. This review provides an important summary of the scope and quality of current knowledge. It demonstrates that further research, and improved adherence to robust study design and reporting are essential if the zoonotic risk from camels in Kenya, and elsewhere, is to be better understood. View Full-Text
Keywords: dromedary; camel; zoonoses; Kenya; systematic review dromedary; camel; zoonoses; Kenya; systematic review
►▼ Show Figures 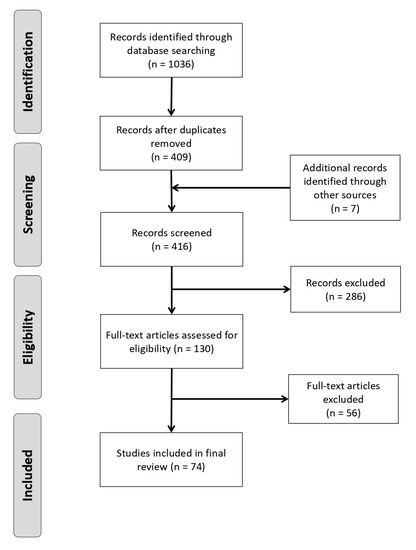