Heat Stress Modulates Brain Monoamines and Their Metabolites Production in Broiler Chickens Co-Infected with Clostridium perfringens Type A and Eimeria spp.
Next Article in Special Issue

Canine mammary tumors (CMT) represent the most common cancer in noncastrated female dogs. Interestingly, triple-negative tumors are the most common molecular subtype in female dogs. In this study, we proposed to evaluate the expression of vascular endothelial growth factor receptor 2 (VEGFR-2), Platelet-derived growth factor receptor (PDGFR), and microvascular density (MVD) in a group of metastatic and nonmetastatic triple-negative CMT and compare the expression based on clinical parameters. Twenty-six female dogs with triple-negative mammary tumors were divided into three groups: nonmetastatic tumors (NMT) (n = 11), tumors with lymph node metastasis (LNM) (n = 10), and tumors with lung metastasis (LM) (n = 5). We observed increased VEGFR-2 expression in LNM compared with NMT and a positive correlation between tumor grade and VEGFR-2 expression. A positive correlation was noted between VEGFR-2 and PDGFR expression. Regarding microvascular density (MVD), we identified a higher number of vessels in primary tumors with lymph node metastasis and lung metastasis compared with tumors with no metastasis. The primary tumors with lung metastasis exhibited an increased MVD compared with carcinoma with lymph node metastasis. Overall, our results suggest a deregulation of VEGFR-2 and PDGFR and high MVD in metastatic tumors, indicating a role for angiogenesis in tumor progression. View Full-Text
Keywords: angiogenesis; metastasis; mammary neoplasm angiogenesis; metastasis; mammary neoplasm
►▼ Show Figures 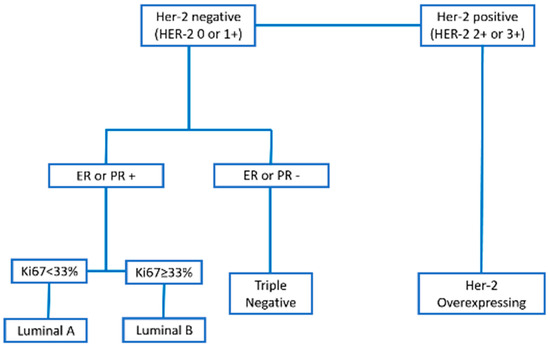