Pulse Pressure Variation Can Predict the Hemodynamic Response to Pneumoperitoneum in Dogs: A Retrospective Study
Next Article in Special Issue

A Review of Immunotherapeutic Strategies in Canine Malignant Melanoma

Mast cells (MCs) are involved in angiogenesis, tissue remodeling and immunomodulation in several human and animal tumors, although their exact role is still controversial. Since no information is available in canine prostate carcinoma (PC) and normal prostate tissues, the aims of this study were to evaluate the possible correlations between MC distribution, molecular expression and microvessel density (MVD) in normal prostatic tissue and proliferative disorders of the canine prostate. All samples (6 normal, 15 benign prostate hyperplasia-BPH, 8 PC) were stained with Toluidine Blue and immunohistochemically evaluated for tryptase, c-Kit (CD117) and CD31. Mast cell density (MCD) and MVD were quantified by the hot-spot method. MCD was significantly increased in periglandular/peritumoral areas, when compared with intraglandular/intratumoral areas, in all groups (p = 0.03). C-Kit expression was strongly associated with PC (ρ = 0.75 p = 0.03), whereas positive correlation between tryptase and c-Kit expression (ρ = 0.64 p = 0.01) was observed in periglandular areas of BPH. MVD showed a correlation with MCD in BPH (ρ = 0.54 p = 0.04). Our data support the importance of c-Kit in regulating MC proliferation. The predominant location of MCs in peritumoral areas of canine PC was similar to the human counterpart, in which PC cells are supposed to produce substances attracting MCs to the tumor microenvironment. View Full-Text
Keywords: tumor microenvironment; mast cells; prostate cancer; dog tumor microenvironment; mast cells; prostate cancer; dog
►▼ Show Figures 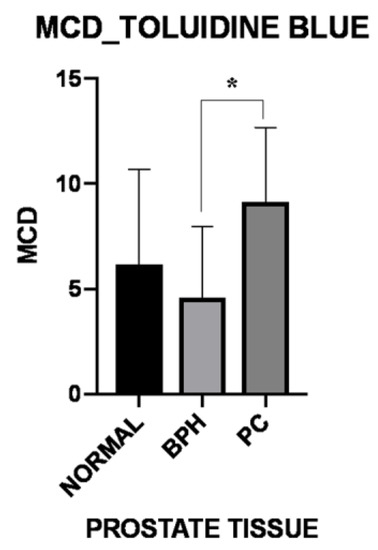