:
A study of the adsorption features of bovine serum albumin (BSA), sodium and potassium cations, and vitamin B1 by porous aluminosilicates with different structures in a medium simulating blood plasma was conducted. The objects of this study were synthetic silicates with a montmorillonite structure Na2x(Al2(1-x),Mg2x)Si4O10(OH)2·nH2O (x = 0.5, 0.9, 1), aluminosilicates of the kaolinite subgroup Al2Si2O5(OH)4 with different particle morphologies (spherical, nanosponge, nanotubular, and platy), as well as framed silicates (Beta zeolite). An assessment of the possibility of using aluminosilicates as hemosorbents for extracorporeal blood purification was carried out. For this purpose, the sorption capacity of the samples both with respect to model medium molecular weight toxicants (BSA) and natural blood components—vitamins and alkaline cations—was investigated. The samples were also studied by X-ray diffraction, electron microscopy, and low-temperature nitrogen adsorption. The zeta potential of the sample’s surfaces and the distribution of active centers on their surfaces by the method of adsorption of acid-base indicators were determined. A hemolytic test was used to determine the ability of the studied samples to damage the membranes of eukaryotic cells. Langmuir, Freundlich, and Temkin models were used to describe the experimental BSA adsorption isotherms. To process the kinetic data, pseudo-first-order and pseudo-second-order adsorption models were used. It was found that porous aluminosilicates have a high sorption capacity for medium molecular weight pathogens (up to 12 times that of activated charcoal for some samples) and low toxicity to blood cells. Based on the obtained results, conclusions were made about the prospects for the development of new selective non-toxic hemosorbents based on synthetic aluminosilicates with a given set of properties.
Keywords:
aluminosilicates; kaolinite; montmorillonite; zeolites; hemosorbents; adsorption; albumin; vitamins; hemolytic activity; body fluid

Porous aluminosilicates of various structural types and with different particle morphologies were chosen as the objects of this study. All studied aluminosilicates were synthetic, with the exception of halloysite nanotubes. The main characteristics of the samples, their chemical formulas, and structural types are given in Table 1.
Samples with a montmorillonite structure corresponding to the ideal chemical formula Na2x(Al2(1-x),Mg2x)Si4O10(OH)2·nH2O with various degrees of isomorphic substitution magnesium atoms in octahedral layers were chosen as objects of this study: with x = 1 (Mg3Si4O10(OH)2·nH2O), x = 0.9 (Na1.8Al0.2Mg1.8Si4O10(OH)2·H2O), and x = 0.5 (Na1.0Al1.0Mg1.0Si4O10(OH)2·nH2O). Samples corresponding to the Al2Si2O5(OH)4 kaolinite formula were synthesized under conditions that made it possible to obtain various particle morphologies—spherical, sponge, and platy. In addition, the sorption and physicochemical properties of the samples were compared with the results of a study of natural halloysite Al2Si2O5(OH)4.∙nH2O with nanotubular morphology. The zeolite of the structural type Beta was also studied as an object of this study.
The synthesis of all samples was carried out under hydrothermal conditions according to previously developed methods [23,33,34,35,36,37]. The resulting product was washed with water and dried. For zeolite samples, an additional decationization procedure was carried out, that is, the removal of alkaline cations K+ and Na+ localized in large cavities. Sample decationization was carried out by the triple treatment of zeolites with an ammonium salt solution followed by drying at 120 °С and the decomposition of the ammonium ion NH4+ at 600 °С for 1 h. In addition, the initial zeolite was preliminarily calcined for 2 h at a temperature of 350 °C in order to remove the adsorbed water and residues of organic molecules (tetraethylammonium) from the pores of the zeolite.

This work studied the possibility of using porous aluminosilicates with different structures and particle morphologies as hemosorbents. The sorption capacity of the samples in relation to the model medium molecular weight toxicants (BSA), vitamin B1, and alkaline cations in a simulated body fluid, as well as their hemolytic activity, were studied. It was established that the sorption capacity of aluminosilicate samples is largely determined by their structural features, porous textural characteristics and surface properties (charge and distribution of active centers on the surface). Thus, samples with a montmorillonite structure, which have the ability to increase the interlayer space over a wide range, have the highest sorption capacity with respect to BSA. However, the time to reach sorption equilibrium for such samples is quite long and amounts to approximately 24 h, which is also related to the peculiarities of their structure. The sorption capacity of zeolite samples is several times lower than montmorillonite, however, the sorption equilibrium is reached in 1 h. The Langmuir isotherm best describes adsorption on all samples, except for samples with nanotubular and platy particle morphology. For these samples, the Freundlich equation is the most appropriate. The hemolytic ability of the samples is largely determined by the morphology of the particles and the chemical composition of the samples. Thus, aluminosilicates with tubular particles and samples with the highest aluminum content have the highest hemolytic activity.
The studies of adsorption features and properties of porous aluminosilicates have shown that aluminosilicate sorbents can be considered potential hemosorbents. They have a high sorption capacity for medium molecular weight pathogens (up to 12 times that of activated charcoal for some samples) and low toxicity to blood cells. Directed hydrothermal synthesis makes it possible to obtain aluminosilicates with a given chemical and phase composition, certain surface properties, and porous textural characteristics. It is shown that the chemical composition, surface charge, particle morphology, and structural features determine the adsorption capacity and biological activity of the samples.
Based on the performed study, it can be concluded that the optimal option for the further development of new selective and non-toxic hemosorbents is synthetic magnesium silicate montmorillonite (Mg3Si4O10(OH)2·nH2O), since it has a significant sorption capacity with respect to BSA, modeling pathogens with an average molecular weight, lack of sorption capacity for potassium and sodium cations from the blood plasma medium, and low hemolytic activity.

The authors are grateful to the employees of the Institute of Experimental Medicine, namely O.V. Shamova and E.V. Vladimirova, for conducting studies on the hemolytic activity of the samples. The authors are grateful to the administration of the St. Petersburg Technological Institute (Technical University) for the opportunity to use the equipment of the Engineering Center (X-ray diffractometer). 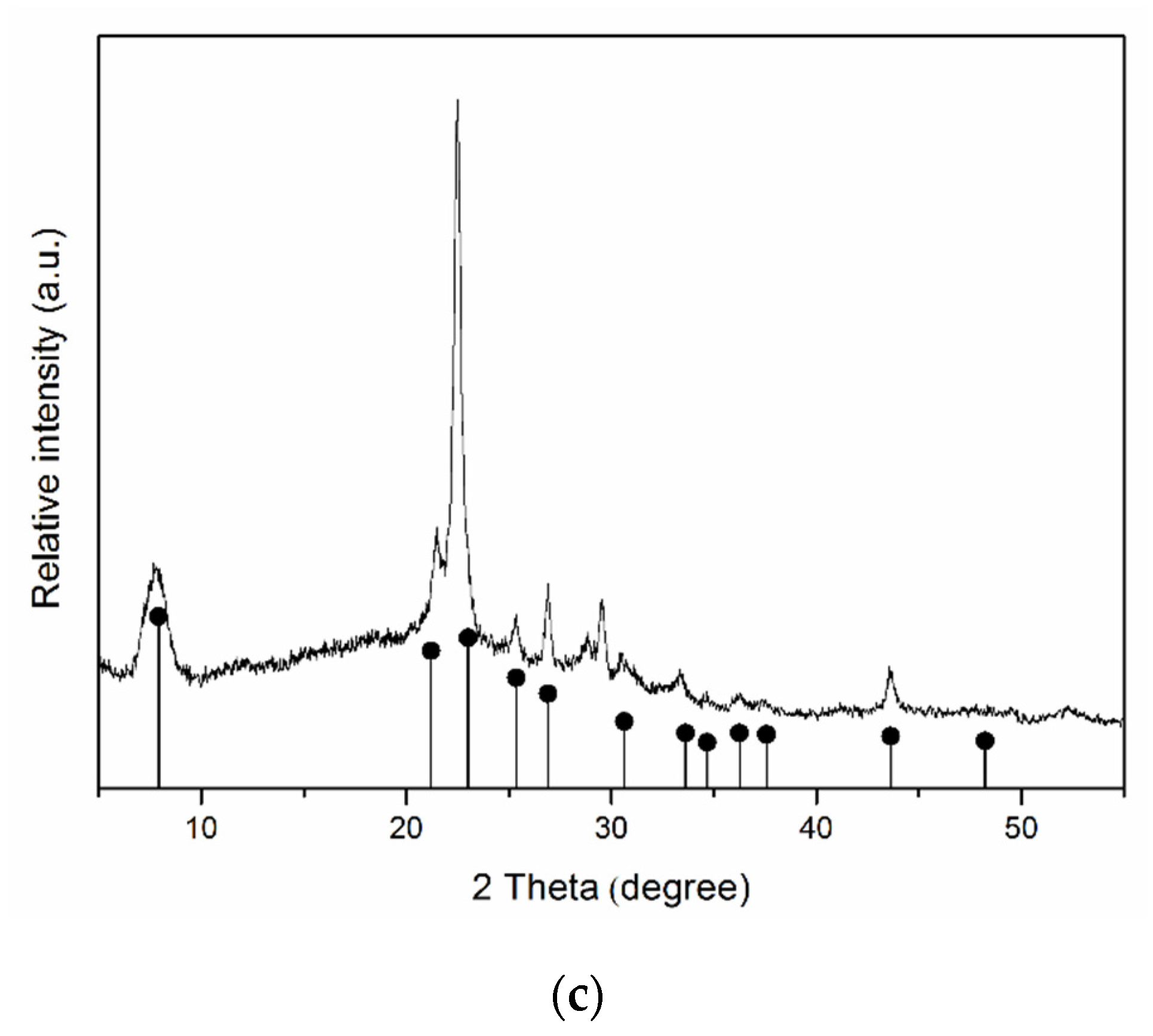 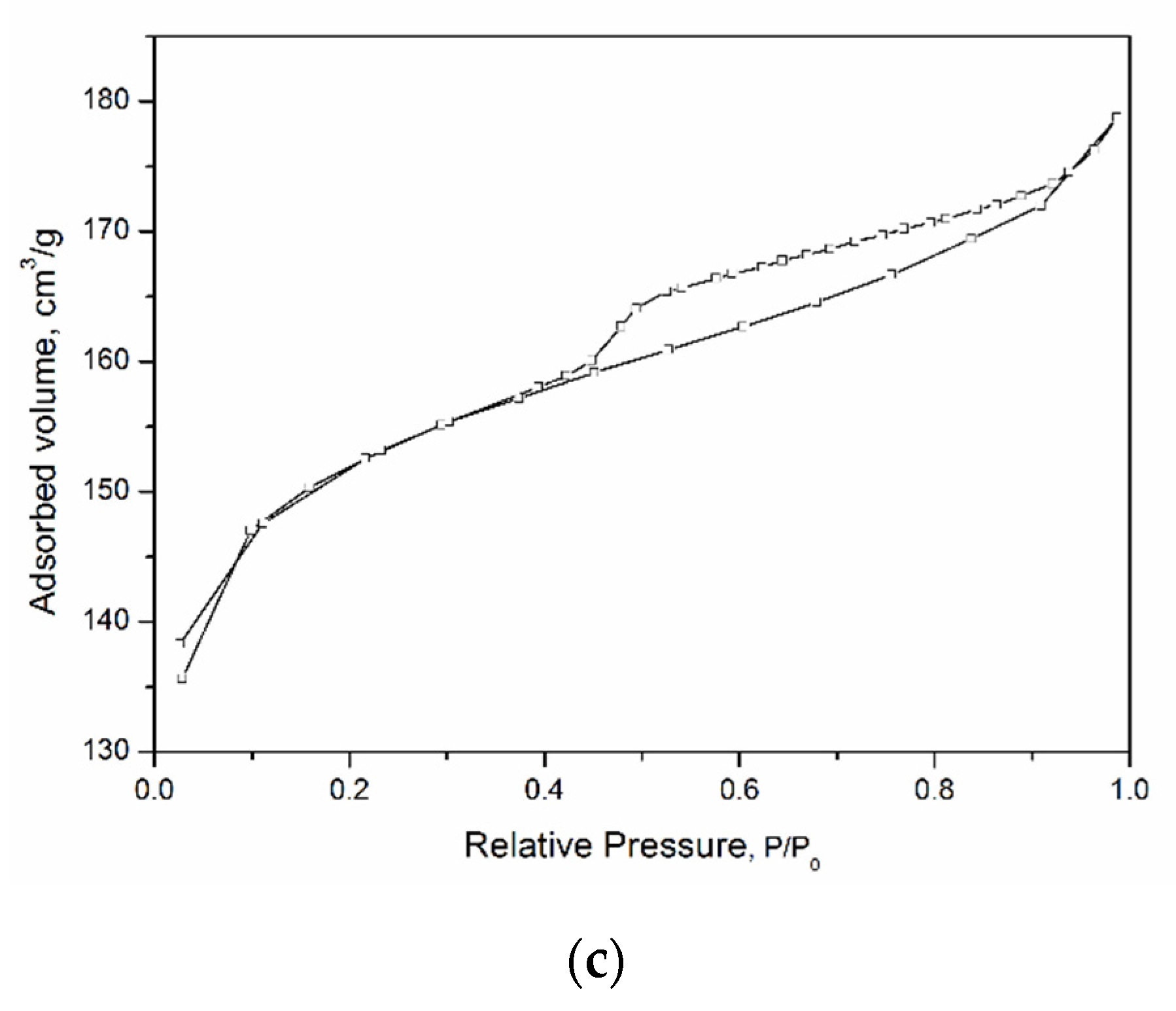 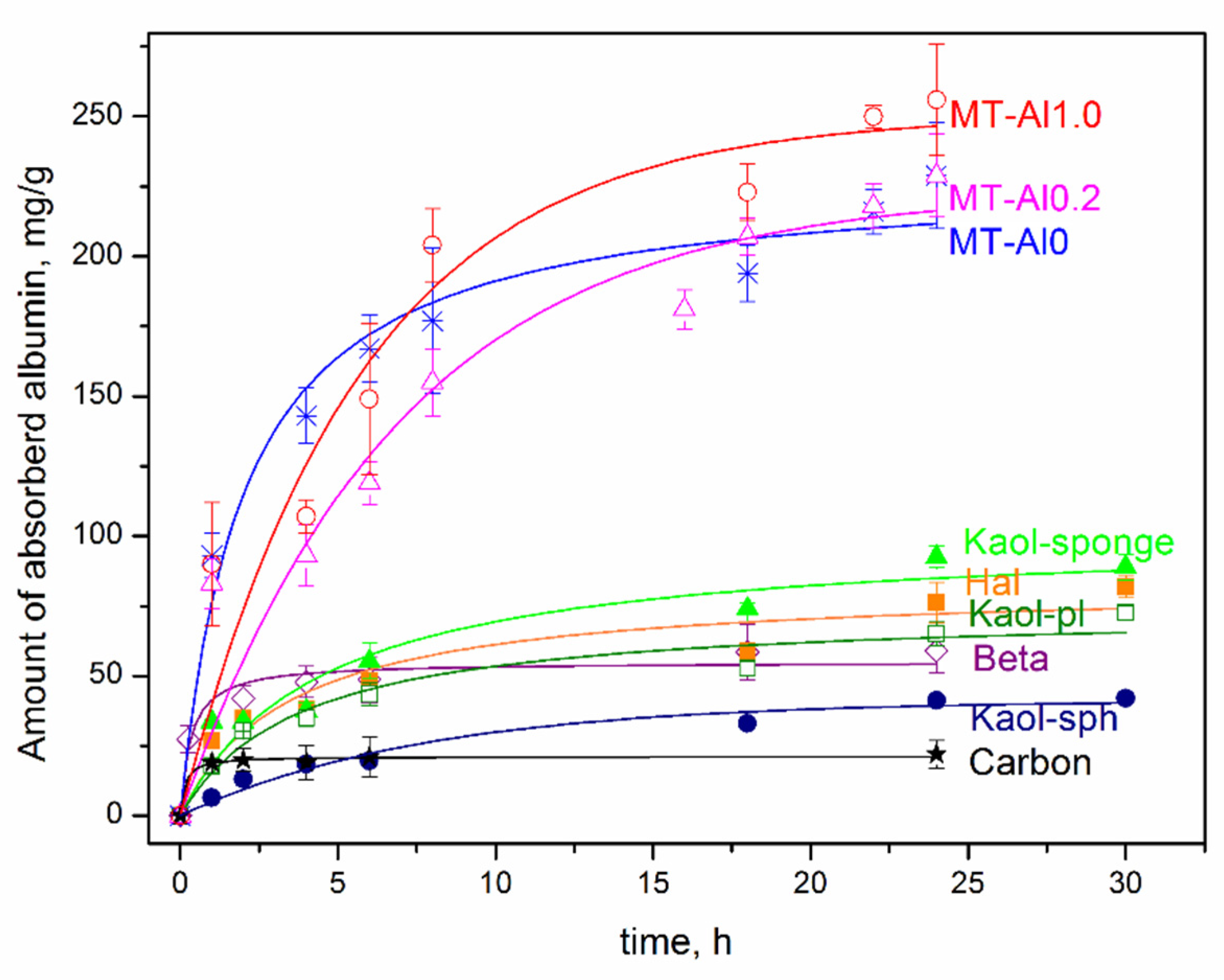