Background: The woody shrub Trichostema lanatum Benth. (Lamiaceae) is native to Southern California and was reportedly used by the Chumash people as a disinfectant and for the treatment of rheumatism. Based on its traditional uses, this study investigated the antibacterial and immunomodulatory properties of extracts from T. lanatum. Methods: A methanolic extract of the leaves and stems of T. lanatum was tested for immunomodulatory activity by measuring the proliferation of murine macrophage cell cultures and the production of the pro-inflammatory cytokine TNF-α by the cells after treatment with T. lanatum. Antibacterial activity of the extract against a panel of six Gram-positive bacteria and two Gram-negative bacteria was evaluated using a disc-diffusion assay. Results: The T. lanatum extract inhibited the growth of Gram-positive bacteria, but not Gram-negative bacteria. Treatment of activated macrophage cell cultures with T. lanatum extract resulted in decreased proliferation of the activated macrophages and a decrease in the production of TNF-α. Conclusions: These results provide the first pharmacological support for the traditional use of T. lanatum by the Chumash people of Southern California as a disinfectant and treatment for rheumatism. View Full-Text
Keywords: Trichostema lanatum; immunomodulatory; antibacterial; macrophage; TNF-α; traditional medicines of North America Trichostema lanatum; immunomodulatory; antibacterial; macrophage; TNF-α; traditional medicines of North America
►▼ Show Figures 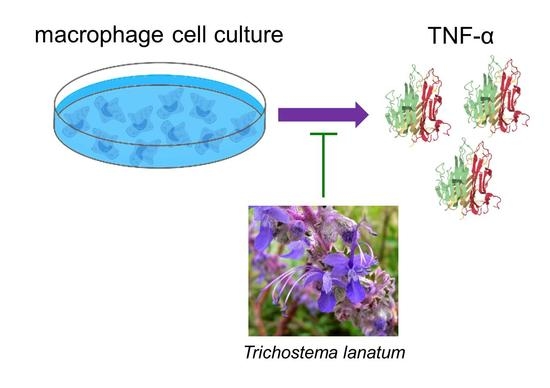