A Review of Dietary Intake of Acrylamide in Humans

Acrylamide (AA) present in food is considered a harmful compound for humans, but it exerts an impact on microorganisms too. The aim of this study was to evaluate the impact of acrylamide (at conc. 0–10 µg/mL) on the growth of bacteria (Leuconostoc mesenteroides, Lactobacillus acidophilus LA-5) and yeasts (Saccharomyces cerevisiae, Kluyveromyces lactis var. lactis), which are used for food fermentation. Moreover, we decided to verify whether these microorganisms could utilise acrylamide as a nutritional compound. Our results proved that acrylamide can stimulate the growth of L. acidophilus and K. lactis. We have, to the best of our knowledge, reported for the first time that the probiotic strain of bacteria L. acidophilus LA-5 is able to utilise acrylamide as a source of carbon and nitrogen if they lack them in the environment. This is probably due to acrylamide degradation by amidases. The conducted response surface methodology indicated that pH as well as incubation time and temperature significantly influenced the amount of ammonia released from acrylamide by the bacteria. In conclusion, our studies suggest that some strains of bacteria present in milk fermented products can exert additional beneficial impact by diminishing the acrylamide concentration and hence helping to prevent against its harmful impact on the human body and other members of intestinal microbiota. View Full-Text
Keywords: lactic acid bacteria; probiotic; yeast; acrylamide; amidase; response surface methodology lactic acid bacteria; probiotic; yeast; acrylamide; amidase; response surface methodology
►▼ Show Figures 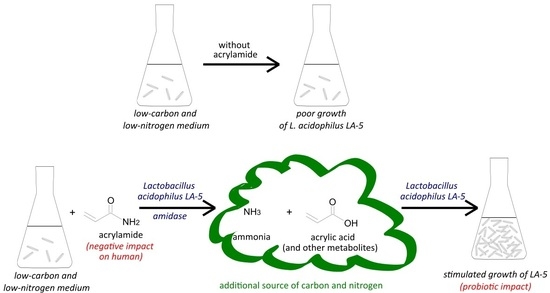